Home / WORLD / Revealed: The real US election interferers who are paying off people to vote for Joe Biden

Revealed: The real US election interferers who are paying off people to vote for Joe Biden 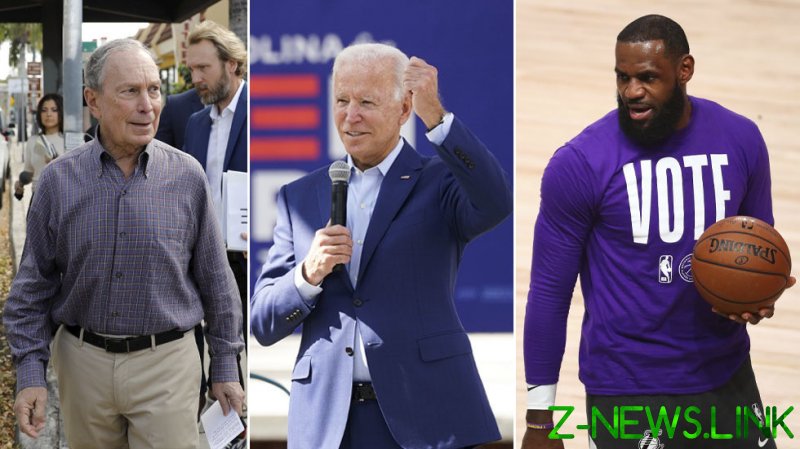 Ever since the 2016 presidential vote, there have been worries in the modern press about election interference. The most infamous case being that of Russiagate, which ended up being absolute fiction. Even with that completely debunked and falling away, destroying the credibility of many in America’s incumbent bureaucracy, we see constant statements about Moscow or other nations interfering in this year’s election.

Now given that the constant barking of ‘Russia, Russia, Russia’ went nowhere, you would think that the mainstream media would look for something more credible. Such as a more domestic problem. Like people trying to quite literally buy votes.

Two very wealthy Americans are attempting to do just that. The first is failed Democratic presidential candidate Michael Bloomberg, and the second is professional basketball megastar LeBron James. Their method is out in the open, with their desire to pay off the fines of felons so that they can vote for Joe Biden.

Bloomberg, a billionaire businessman and former New York mayor, has raised more than $16 million from supporters and foundations over the last week to pay the court fines and fees for more than 30,000 Black and Latino voters in Florida with felonies, allowing them to vote in the upcoming election.

Florida forbids ex-criminals from voting if they still owe court fines or fees associated with their convictions.

Now, it is illegal in the United States to make offers of money to vote a specific way. Which is why the Florida attorney general has recommended that the FBI and Florida department of law enforcement investigate Bloomberg. It wouldn’t surprise me if another investigation is recommended for James, who is trying to do the same thing under the guise of racial equality.

Since James is a basketball player instead of a scholar, I can give him a little bit of leeway when he tries to say that these are votes that are being suppressed. For all I know, even knowing the definition of the word ‘felon’ is not top of his priority list. Heck, it’s probably not even close to the priority of free throw accuracy for him.

However, lack of knowledge does not excuse ignorance of what the law is. I would even go so far as to say it is immoral to want to do this sort of thing. Using power and influence to buy someone’s vote not only robs the person you want to vote of their agency, but also spoils the legitimacy of the election via bribery.

With all of that said, I have my doubts that you’re going to see Don Lemon, Chris Cuomo, or any other mainstream left-leaning media figurehead say one negative word about this. Now if both of these wealthy gentlemen were doing the exact same thing for Donald Trump, the story would be trending on Twitter, on Facebook, and would be on the front page of just about any left-leaning website and newspaper that you could think of. It would likely be on the right-wing ones as well. And why wouldn’t it be? It is election tampering. There is no other way to slice it.

This just shows the absolute hypocrisy of the modern left. When limousine liberals go out and do dirty or illegal things to mess with an election, you can hear a pin drop. As we’re seeing in this case, it’s real and actually happening. But everyone else would rather waste their time worrying about other nations that allegedly might be trying to get involved in our election, when actually they have their own priorities.

I have an idea that I am willing to give away for free – let’s worry about the people who are really, blatantly screwing up the purity of our elections. Starting with Bloomberg and James.