Revealed new details about the baby kidnapper in Kiev 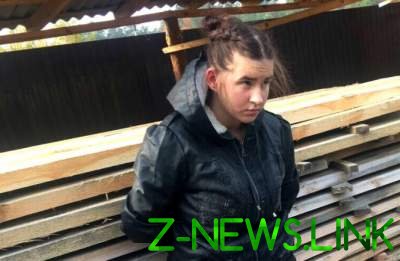 The Ukrainian Ombudsman has told about his childhood Diane Shawl that kidnapped the baby in the center of Kiev.

Young Diane Shawl, which had kidnapped the child out of the stroller Obolon, grew up in a rehabilitation center. About it told the Commissioner of children’s rights Mykola Kuleba on the social network Facebook.

“From official sources we know that when Diana was 3 years old, her mother was deprived of parental rights. When was 5, his mom died, and care was prepared by the grandmother. At the time she was bad, was disobedient. Grandma could not withstand the “difficult child” and sent to a social rehabilitation center, then Diana came to the orphanage. Was there long – had gone to study at a vocational school. But the status of the “unwanted child” is clearly reflected in its character and behavior,” the statement reads.

According to Kuleba, he spoke with close friends of 20-year-old Dianne to find out the possible motives of the girl.

So, last year and a half Diane was regularly asked at acquaintances the large sums of money (from 30 000 to 500 000 UAH) allegedly yourself to treatment for 4 stages of cancer.

“The girl created a closed community on the social network to raise funds itself “treatment”. In July, informed the friends that gave birth to a daughter with hydrocephaly and she also needs money for treatment. But in this story she is constantly confused – were told different information about the diagnosis, work, family position,” – said Kuleba. 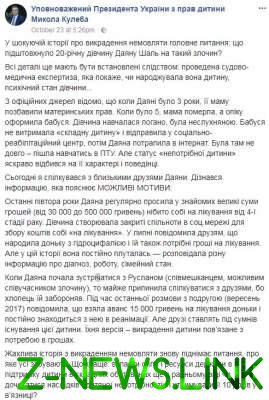 When Diana started seeing Ruslan (roommate, possible accomplice), almost ceased to communicate with friends because the guy she was banned. During a recent conversation with a friend (September 2017) said that he had taken an advance of 15,000 hryvnias on treatment of the daughter and is constantly with her in intensive care. But friends are questioning the existence of this child. Their version of the rape of the child is related to the need for money.

A terrible story of kidnapping baby again raises the question about which forget. Is it better to invest energy and resources of the state in support of the child in difficult circumstances at an early age or to wait for the effects of “child abandonment” and hold it for 10 years in prison?