Home / WORLD / Revealed: How the US Marines secretly advised on the hit movie Avatar, despite later framing it as being anti-war

Revealed: How the US Marines secretly advised on the hit movie Avatar, despite later framing it as being anti-war 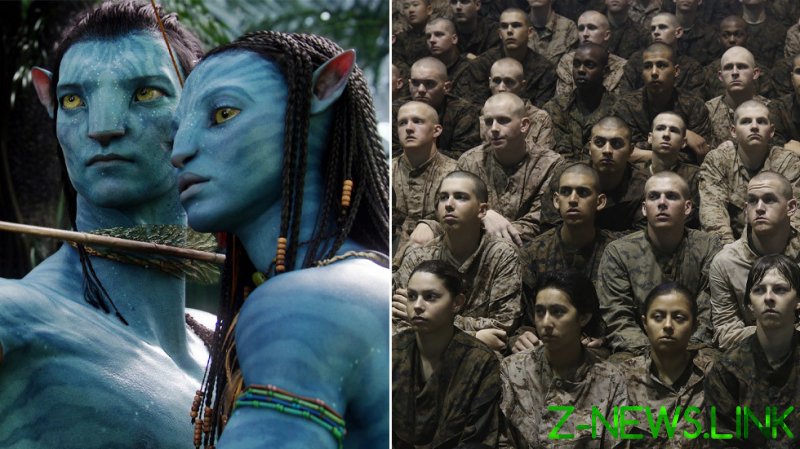 The 3-D sci-fi epic Avatar was recently re-released in China, and revenues from the People’s Republic have seen the movie overtake Avengers: Endgame and reclaim its position as the highest-grossing film of all time.

This tidbit about box office statistics has resulted in a flurry of news coverage, but hidden behind the endless reports from journalists with dollar signs in their eyes is a tale of covert military propaganda, and how the DOD pressures filmmakers to produce more pro-war content.

Shortly after its original release in 2009, Avatar met with a wave of criticism, despite its enormous popularity with moviegoers. A Vatican newspaper commented that the picture “gets bogged down by a spiritualism linked to the worship of nature,” while a review on Vatican Radio said it “cleverly winks at all those pseudo-doctrines that turn ecology into the religion of the millennium.”

American conservatives accused Avatar of being anti-American and anti-capitalist, while liberals skewered the film for its supposed racism, for the storyline of blue-skinned natives being saved by a noble white man – Jake, a paralysed former Marine.

Likewise, the semi-official Marine Corps Times reported how “Avatar has been the target of anger and backlash from some who see it as an affront to the Marine Corps and a negative allegory for the wars in Iraq and Afghanistan.”

They also published a letter from the then-director of Marine Corps public affairs, Bryan Salas, which said that Avatar “Takes sophomoric shots at our military culture and uses the lore of the Marine Corps and over-the-top stereotyping of Marine warriors to set the context for the screenplay.”

James Cameron apologises to the military for the movie

Salas’ public criticisms were widely reported and led James Cameron – the producer of Avatar – to reach out to the public affairs chief to discuss his concerns. Cameron then gave an extended interview to Marine Corps Times where he effectively apologised for the movie, and denied that it was anti-military.

Cameron told the Times, “I am also concerned that some people are simplistically saying that Avatar is ‘anti-military’. The highly sympathetic main character of the film, through whom the audience experiences almost every moment of the story, is a former Marine. His courage in the face of overwhelming odds makes him a hero of mythic proportions by the end of the story.”

He continued, “While the enemy force in the film are mercenary troops, who are clearly stated to be acting as corporate security contractors, it is not a goal of the film to criticize legitimate military forces, especially the courageous men and women who defend this country.”

The producer, who worked closely with the Marine Corps on his action blockbuster True Lies, went on to explain that his youngest brother John David Cameron joined the Marines in 1985 and fought in Operation Desert Storm. Cameron added, “After that conflict, Dave has worked for me, along with several of his fellow Marines, until the present. And I still have several former Marines working directly for me who have become like family.”

Cameron explained that his brother worked on Avatar as a technical advisor to Sam Worthington, who plays Jake in the film. He concluded, “So even though the US Marines are not mentioned specifically in dialogue, I felt it was important to make this association as a tribute to the calibre of people created by the Marine Corps’ training, spirit and values.”

Documents reveal the truth about the military and Avatar

Years later, in response to Freedom of Information requests, the Marine Corps released nearly 1,700 pages of activities reports from the Corps’ entertainment media liaison office. The documents tell a radically different story to the media storm that followed the release of Avatar, and reveal a close relationship between the Corps and Cameron during the film’s development.

A report from April 2009 lists Avatar as a supported project, and details how Hollywood liaison officers “Met with director/writer James Cameron on 28 March for a sci-fi feature that finds a Marine paraplegic war veteran on another planet. In the project, the main character encounters a humanoid race with their own language and culture, which later comes to odds with humans.”

The reports goes on to say they offered “support for verbiage in the script dialogue” and that they “expected to meet with Mr. Cameron again to continue with script changes.” Another document from two weeks later records how they met with the producer on set to continue providing support.

Exactly what script changes were made as a result of these meetings is not recorded in the documents, but a draft script treatment by Cameron offers a glimpse into what disappeared.

In the draft version, Jake was paralysed when he “fell out a window, drunk, at a base party.” This detail went missing from the final film, replaced by Jake getting wounded in combat, and dialogue such as “I became a Marine for the hardship. To be hammered on the anvil of life. I told myself I can pass any test a man can pass.”

In December 2009, officers from the Marine Corps media liaison office attended the Avatar premiere, and later reports noted how the film had passed the $1 billion mark at the box office. The liaison office got back in touch with Cameron to arrange screenings on CENTCOM military bases, as well to have the actors and producers take part in a “Navy Entertainment Program visit to 11th MEU [Marine Expeditionary Unit] and other units in the AOR.”

The updates on Avatar continued for months after the Salas letter and Cameron’s interview responding to it. Emphasising how the military actually saw the film as a propaganda success, an Army report from 2011 refers to a military panel at Comic Con featuring entertainment liaison officers. It lists several officials who appeared on the panel along with some of the projects they worked on – including Avatar.

How the Pentagon gets Hollywood to make more pro-war movies

In light of these documents, we need to take a more nuanced view of the military’s relationship with Avatar, and the public criticisms made by Salas. It was around this time that the DOD embarked on a more proactive approach in Hollywood, seeking greater influence in Tinseltown. The DOD-Hollywood chief at the time, Phil Strub, began giving more public interviews, liaison officers started having meetings with studio heads to discuss projects before they had even asked for support, and all the different military branches stepped up their outreach efforts.

By publicly criticising an apparently left-wing, anti-military film, Salas’ letter played into the narrative that Hollywood is full of peaceniks who hate the military, and thus pressured filmmakers to make more pro-military, pro-war films.

This same narrative, that Hollywood makes too many anti-military films, was repeated by several participants at an online conference hosted by the US Naval Institute last October. The conference featured several current and former military-Hollywood officials as well as retired military officers who work as technical advisors to the entertainment industry, and was likely a part of the same efforts to increase the Pentagon’s influence on the movie business.

However, there is no evidence to support the narrative that Hollywood is anti-military – seven of the top ten highest-grossing film franchises of all time have benefited from DOD and other government support, including the Marvel Cinematic Universe, James Bond and The Fast and the Furious. Other major franchises supported by the Pentagon and/or CIA include Transformers, Pirates of the Caribbean and Mission: Impossible.

Indeed, the only $200 million dollar tentpole movie that deviates from the norm and could possibly be seen as anti-military or anti-war is Avatar, and it was publicly criticised by the Marine Corps even though they had a hand in rewriting the script. Thus, the Avatar episode only serves to highlight how the Pentagon won’t tolerate major movies having even a marginally anti-military vibe, and are seeking full-spectrum dominance of Hollywood.