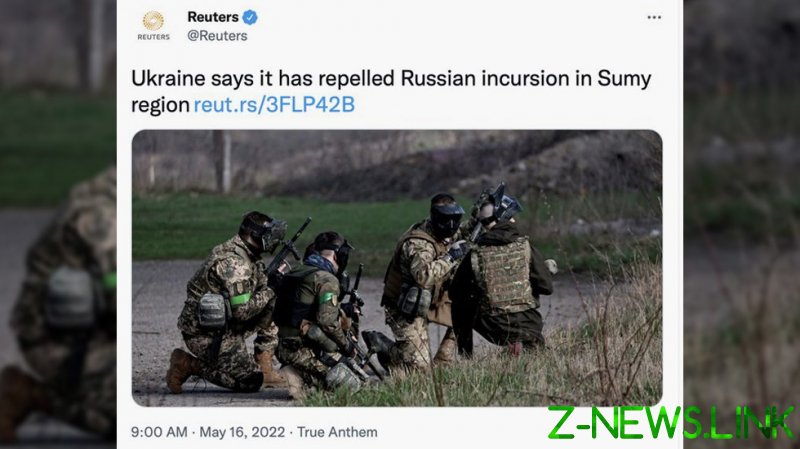 The Reuters news agency has become the target of online ridicule after it published a report on the Ukraine conflict alongside an image of what appeared to be people playing airsoft.

The report was released on Monday, stating that Ukrainian soldiers had driven off Russian forces in Sumy Region, with the headline reading: “Ukrainian border guards repelled an incursion by a Russian sabotage and reconnaissance group in the northeastern region of Sumy on Monday, the governor of the Sumy region said.”

However, what drew the attention of users online was not the content of the report, but the image used to illustrate it. The photo, which was apparently meant to represent Ukrainian soldiers fighting on the frontlines, upon closer look, actually shows a group of people seemingly playing a round of paintball, equipped with the characteristic masks and paintball guns.

A link to the article, posted alongside the aforementioned image, was published to the Reuters Twitter account, where it remains, despite receiving hundreds of comments pointing to the ill-fitting image.

Some users have stated that this Reuters post is a prime example of why it’s become increasingly difficult to trust mainstream media reports on complex foreign conflicts such as the one in Ukraine, which is already hard to follow due to the avalanche of conflicting and misleading reports supposedly coming from the frontlines.

Other users have also jested that the image actually depicts the paintball industry getting in on the Russia-Ukraine conflict to make a quick buck, suggesting that the $40 billion proposed by the US Senate might get spent on paintball gear.

Reuters attempted to justify the use of the image, stating that the photo showed “members of the territorial defense force” attending a “training simulation.” However, many have slammed the agency for not including that clarification in the original tweet in the first place.