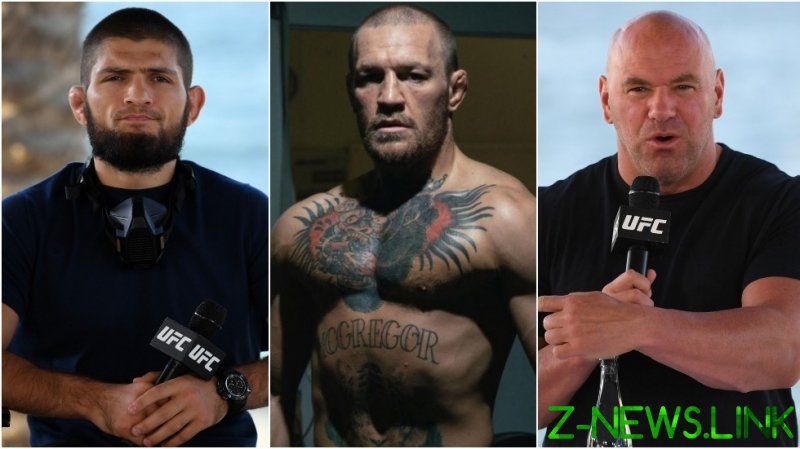 The latest Fight Island extravaganza gets underway with the card headlined by Max Holloway and Calvin Kattar on January 16, followed by a Fight Night show topped by the welterweight contest between Michael Chiesa and Neil Magny on Wednesday, January 20.

The action in Abu Dhabi culminates with the eagerly-awaited return of Conor McGregor as he rematches Dustin Poirier at UFC 257 on January 23.

But for all the action inside the cage on Yas Island, there is set to be plenty of drama on the sidelines as deals are discussed, potential flashpoints are navigated, and the future of UFC divisions is mapped out.

Here are the key things to watch out for.

UFC boss Dana White has made no secret of his desire to lure lightweight champion Khabib Nurmagomedov out of retirement, after the unbeaten Russian shocked the MMA world by calling time on his career following his submission of Justin Gaethje on Fight Island in October.

Emotions were running high in what was the first fight for ‘The Eagle’ since the death of his father and trainer Abdulmanap, leading to suggestions that the decision was one forged in the heat of the moment, and as such may be open to reconsideration.

That is certainly what White is hoping, and the UFC supremo has expressed confidence in his powers of persuasion to entice Khabib to change course and return to the octagon for a crack at the 30-0 mark.

Likewise, White has made no secret of his wish for that fight to be a blockbuster rematch with Conor McGregor, which is widely seen as the biggest, most lucrative match-up the promotion could book.

Khabib and White have agreed to meet in the UAE, and the Russian has already arrived in the country with a large entourage of teammates ahead of the UFC debut of his cousin, Umar, on the McGregor-Poirier undercard on January 23.

White is duly expected in Abu Dhabi this week and has said he will meet with Khabib soon after his arrival.

However, counter to White’s plans to get Khabib to change his mind over his retirement is the fact that the Russian star has thus far largely poured cold water on that prospect.

Back in Moscow in December, Khabib asserted that his meeting with White would be business related and would focus on his plans for the UFC to host fights from his newly-acquired promotion, Eagle Fighting Championship, on its Fight Pass streaming platform.

Indeed, Khabib has frequently reiterated that his post-octagon plans are centered on developing his nascent agricultural business and other commercial interests – although he has expressed reluctance to officially vacate his title just yet.

The 32-year-old says he anticipates that White will simply put more money on the table to bring him back, admitting that an offer like $100 million would “be a problem.”

There will be an increasing clamor from fans for Khabib to come back, and equally those who see honor in sticking to his original decision.

While we are unlikely to know the immediate details of what goes down between Khabib and White when they meet, the discussions will be a crucial starting point in whether we ever see the Dagestani destroyer competing in the octagon again.

Conor McGregor’s chances of getting the opportunity to exact revenge on Khabib for his humbling 2018 defeat will largely rest on whether the Irishman defeats Dustin Poirier when they face each other again at UFC 257.

‘The Notorious’ won the pair’s first encounter in rapid fashion at UFC 178 back in 2014, knocking out ‘Diamond’ inside the first round of their featherweight contest.

If McGregor realistically wants to earn himself another crack at Khabib, he again needs to overcome Poirier, who himself gave the Russian a scare in their September 2019 bout before being submitted in the third round.

The presence of McGregor and Khabib at the same time on Fight Island adds spice to the mix, with the latter set to be in his cousin’s corner on the UFC 257 undercard.

Khabib and McGregor have not come face to face since their explosive clash in Las Vegas in 2018, which ended in now infamous fashion when Khabib sparked an all-out brawl by vaulting the cage. 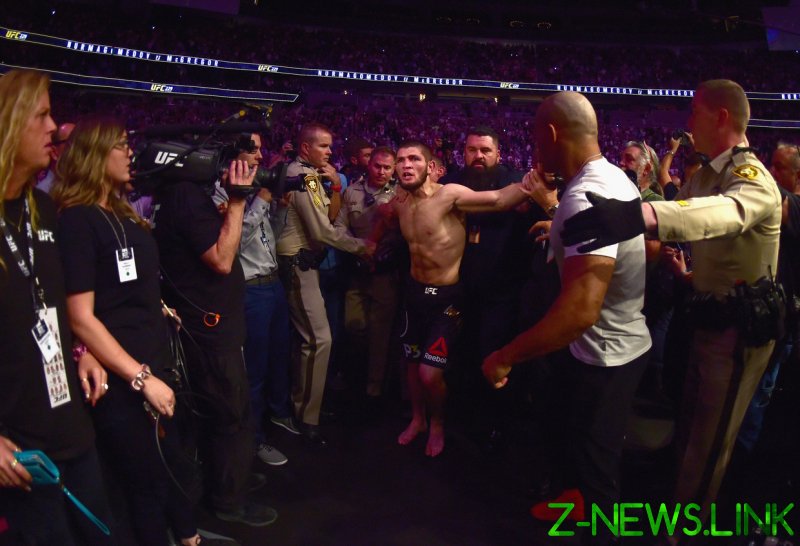 Khabib famously vaulted the octagon in an attempt to attack McGregor’s team when they met in Las Vegas in 2018. © Getty Images via AFP

Two of the other protagonists that night, Khabib’s cousin Abubakar and teammate Zubaira Tukhugov, both of whom traded blows with McGregor in the melee, are with Khabib in Abu Dhabi, although whether they will be in immediate attendance at UFC 257 or in any kind of proximity to McGregor is another question.

Khabib has said he wouldn’t put it past the UFC trying to manufacture a ‘chance’ encounter between himself and the Dubliner, in an attempt to stoke tensions and fuel grudges for a potential rematch.

McGregor’s Russian nemesis is clearly still playing on his mind, as evidenced by the Twitter back-and-forth he engaged in with Khabib’s manager Ali Abdelaziz during the festive period.

Will the pair meet on the sidelines on Fight Island, and will the sparks fly if they do? And if McGregor beats Poirier, will he take the chance to call out Khabib?

Those are among the questions that could be answered in Abu Dhabi in the next fortnight.

THE RETURN OF FANS

The UFC’s three-card run at Etihad Arena will see the long-awaited return of fans to watch the action, marking the first time that has happened since the Covid-19 pandemic asserted its grip in March last year.

Ever since, the kicks, punches, takedowns and calls from fighters’ corners have echoed around largely empty arenas as fans have been forced to watch events from home.

This time around in Abu Dhabi, the local Department of Culture and Tourism has ruled that a limited number of spectators will be allowed in attendance.

Some reports have put that number at around 2,000 for each event at the newly-built 18,000 seater venue, meaning it will be at 11 percent capacity.

It’s a far cry from the masses typically thronging arenas wherever the UFC goes, but will be taken as a step in the right direction as the promotion – as with the wider world – seeks a return to something approaching normality in 2021.