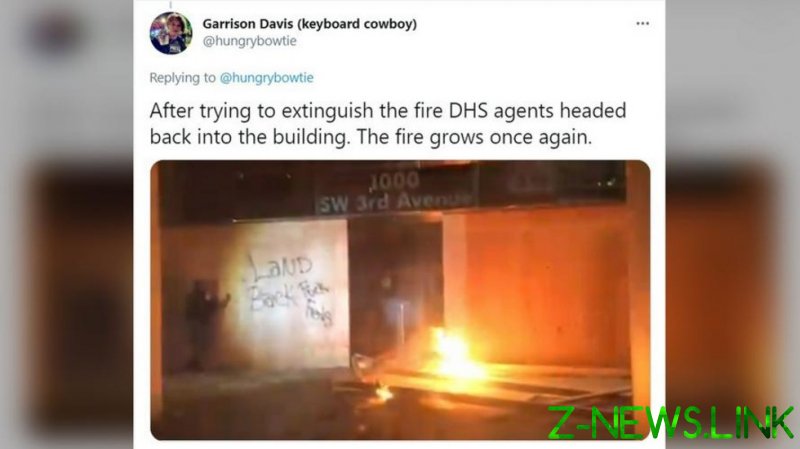 Local media reported that around 50 to 60 black-clad demonstrators clashed with federal agents on Thursday night, breaking windows and setting on fire a section of plywood barring entry to parts of the Mark Hatfield Federal Courthouse in central Portland, Oregon.

Defenders of the building from the Federal Protective Service (FPS) responded with tear gas and impact munition shots, ultimately pushing the crowd away. At one point a US flag was burned by the demonstrators, footage from the scene showed.

The street skirmishes, which lasted for several hours, were reminiscent of the scenes that took place during a period of nightly protests in Portland that started last May after the death of George Floyd in Minneapolis.

The reignition of violence came just days after a fence, which was erected around the courthouse to ward off vandals, was demolished on Monday. The FPS touted the development as a “return to normalcy.”

The apparent trigger for the rioting was the proposed Line 3 oil pipeline project, which would run through the lands of the Anishinaabe indigenous group in parts of the US and Canada. Demonstrators also cited a number of other causes for their destructive direct action.

Earlier in the day, a group of around 30 anti-pipeline protesters broke into the courthouse and caused property damage, Portland police reported. They refused to leave when ordered, with one of the demonstrators – identified as 22-year-old Darby Howard – arrested for resisting.

City authorities have warned that more confrontations may happen in the city, as multiple protest events are scheduled to take place over the weekend.