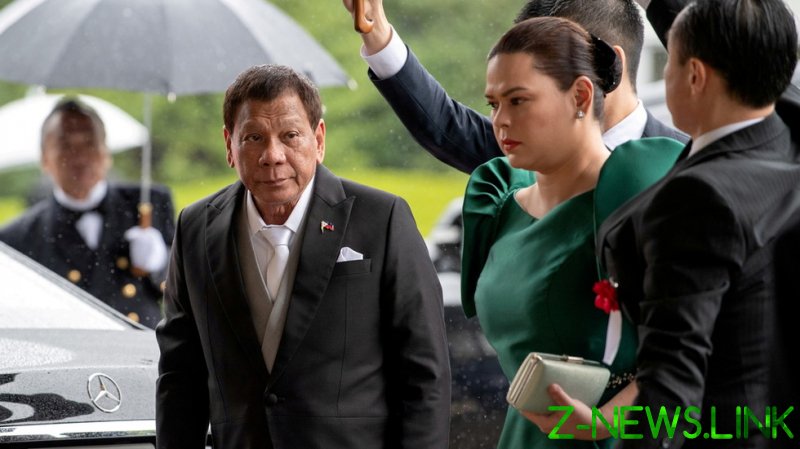 Duterte, 76, is barred from serving a second six-year term as president under the constitution. For some time, he was reportedly considering a plot to retain the presidency by becoming a running mate for his long-time aide Senator Christopher ‘Bong’ Go on the election ticket, and subsequently replacing him at the helm following the new president’s resignation.

This scenario, which many Fillipinos perceived as violating the spirit of the constitution, will apparently not be executed. On Saturday, Duterte announced plans to retire from politics, while Go, 47, filed papers to run for vice-president with a yet-to-be-disclosed candidate for the presidency. That candidate may be Duterte’s own daughter, Sara Duterte-Carpio, who is currently serving her second term as the mayor of Davao, the third-largest city in the Philippines.

Duterte seemed to confirm her bid, telling journalists after the paperwork was filed by the senator that “this is Sara-Go,” according to local outlet ABS-CBN News. Go earlier said he was running for vice-president because Duterte refused to do so.

It remains to be seen if Duterte-Carpio, 43, will agree to the proposed plan. She has recently filed papers for her reelection bid as mayor, and her spokeswoman Christina Frasco declined to comment on the development.

Duterte-Carpio earlier expressed her opposition to her dad’s purported plans to stay in power, and said she had no presidential ambitions herself, even as opinion polls showed she had a strong chance of winning. In a September poll, she topped a list of 12 potential presidential candidates with 20% support.

When asked in the same interview whether he gave his daughter permission to run for president, Duterte said the pair didn’t “talk about politics” much, adding that “this is for the better.” In late August, Duterte-Carpio said she had an unpleasant conversation with her father about his potential run as vice-president and the alternative ticket including her and Go. She asked the president and the senator to leave her out of the ruling party’s internal politics.

Observers say that, despite previous resistance, Duterte-Carpio could be convinced to run for the top office if her father’s promise to retire from politics is assured. Candidates have until October 8 to register, while withdrawals and substitutions are allowed until November 15, leaving time for maneuvering.

The president is facing an uncertain future out of public service because of his controversial policies, including his brutal crackdown on drug traders. Critics say he implemented a system of extrajudicial killings by the police and has to be prosecuted for it. Go said if elected, he will ensure a continuation of Duterte’s programs, including anti-drug actions.