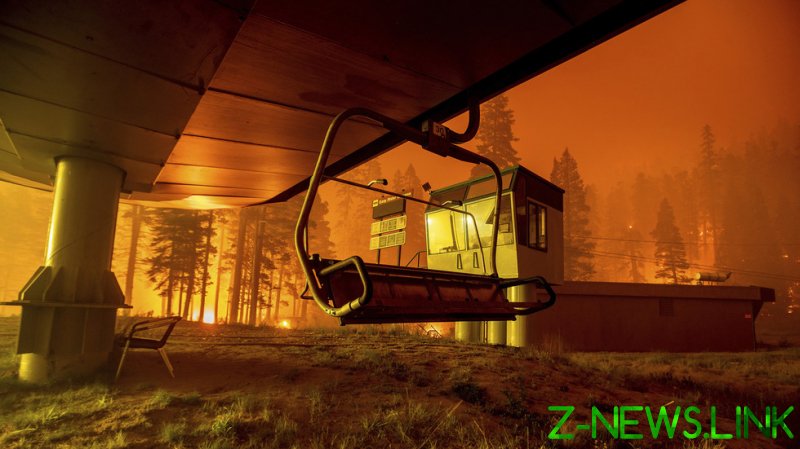 Residents of South Lake Tahoe, a resort town on the Californian side of the lake straddling the state’s border with Nevada, were ordered on Monday to head east, as law enforcement officers went door to door to make sure everyone complied.

The order was given as the Caldor Fire – one of 20 large wildfires currently burning in the Golden State – closed in. Photos from South Lake Tahoe showed smoky air, and pictures from the Sierra-at-Tahoe resort 12 miles (19km) to the south showed firefighters, aided by the resort’s snow cannons, desperately trying to hold back the inferno.

Some 24,000 people have already left their homes along the highway connecting South Lake Tahoe with Sacramento, CBS San Francisco reported on Monday. The fire has destroyed nearly 500 structures, injured five people, and burned more than 177,000 acres, according to data from Cal Fire.

The Caldor Fire had only been 14% contained by Monday afternoon, and firefighters in Riverside and San Diego Counties, south of Los Angeles, were facing similar difficulties getting the Chaparral Fire under control. Dramatic video footage captured over the weekend showed helicopters dumping tank loads of water onto the blaze, which had been whipped up into a tornado of flames.

Wildfires are a natural occurrence in California, though officials and scientists have also blamed climate change for extending dry spells and exacerbating the severity of the fires. California authorities have also been blamed by some experts – and former president Donald Trump – for poor forest management.