‘Resign in disgrace!’: Republicans eviscerate AG Garland as they accuse him of sending FBI after parents protesting school boards 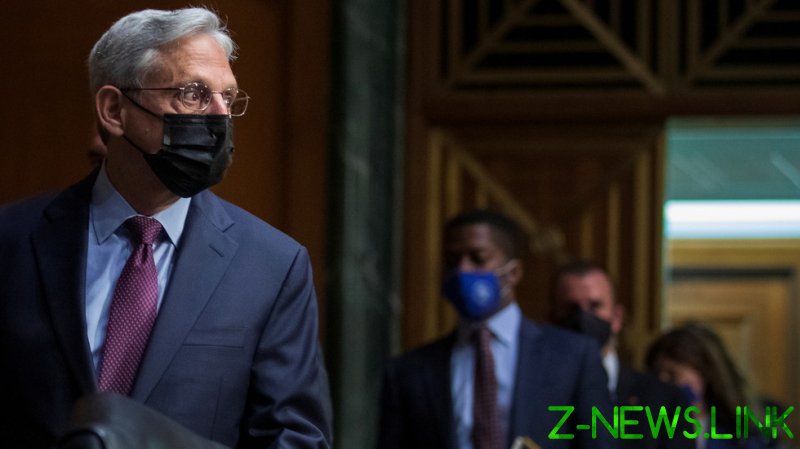 Garland testified before a Senate Judiciary Committee hearing on Wednesday, and Republicans on the committee were out for blood. The hearing took place several weeks after Garland authored a memo seemingly directing the Justice Department to sic the FBI and other federal agencies on parents protesting school boards over mask mandates, transgender policies, and the inclusion of ‘Critical Race Theory’ in curricula – according to the conservatives and the parents in question.

Garland has denied targeting parents, claiming that the effort is directed at the threats to school board members, not the First Amendment rights of the parents.

While Garland’s memo doesn’t implicitly mention “parents,” it was issued after the National Association of School Boards (NASB) claimed in a letter to President Joe Biden that the protests of angry parents “could be the equivalent to a form of domestic terrorism and hate crimes,” and should be handled like “domestic terrorism,” using the Patriot Act.

Texas Sen. Ted Cruz (R) accused Garland of “politicizing” the Justice Department and using it as “a tool of political retribution” against the angered parents. No violent incidents were cited in Garland’s memo, and Cruz forced the Attorney General to admit that he knew of no such incidents, and that speaking out to school boards is protected by the First Amendment.

Documents retrieved by parents under the Freedom of Information Act show that NASB President Viola Garcia and CEO Chip Slaven planned their letter over several weeks with the White House, and sent it without the approval of the association’s board of directors, who considered its language “extreme.” The letter has since been disavowed by the NASB, but Garland’s memo has not been rescinded.

Under questioning from Sen. Ben Sasse (R-Nebraska), Garland maintained on Wednesday that he acted based on the recommendation of the NASB, but Sasse cut off the AG mid-sentence.

“No, you didn’t receive an anonymous letter,” Sasse interjected. “White House political staff co-wrote it with this organization, which is why the organization has rejected it. You know these facts now to be true, yet you still won’t disavow your memo.”

Garland insisted that his memo toned down some of the language contained in the NASB’s letter, and told the hearing that “True threats of violence are not protected by the First Amendment…those are the only things we are worried about here. We are not investigating peaceful protests or parent involvement in school board meetings.”

One of the cases cited in the letter was that of Scott Smith, who was arrested at a Loudoun County School Board meeting in Virginia earlier this year. Smith physically threatened someone and resisted arrest, and was taken to the ground by officers. However, Smith’s daughter had been raped in the school’s bathroom by a boy in a skirt. A member of the board told Smith that she didn’t believe him, and it later emerged that the rape did happen, and was covered up by the school, apparently to protect its transgender bathroom policy.

“Do you apologize to Scott Smith?” Arkansas Sen. Tom Cotton (R) asked Garland on Wednesday. Garland didn’t directly apologize, but did admit that Smith was within his rights to cause a scene at the board meeting. “Thank God you’re not on the Supreme Court,” Cotton shot back. “You should resign in disgrace, Judge.”

The Smith case has further inflamed tensions in the affluent Virginia county, where students staged a walkout on Tuesday to protest the cover-up. The case, as well as disputes over mask mandates and the teaching of critical race theory, has become a key issue in Virginia’s gubernatorial election, set to take place next week.

Democratic Candidate Terry McAuliffe has alternated between insisting that critical race theory is not taught in public schools, and claiming that such theory “is as important” as math and English. He has accused his rival, Glenn Youngkin, of trying to “silence the voices of black authors” by suggesting that parents should be made aware that their children are being shown books like ‘Genderqueer’ and ‘Lawn Boy,’ the latter of which contains descriptions of gay sex between children.

Youngkin is a supporter of parents having some say in what their children are taught, while McAuliffe stated at a debate this month that “I don’t think parents should be telling schools what they should teach.” More than six in 10 Virginians say school curricula will be a “major factor” in how they vote next week.