Residents of the Dnieper showed the paintings of the famous dürer 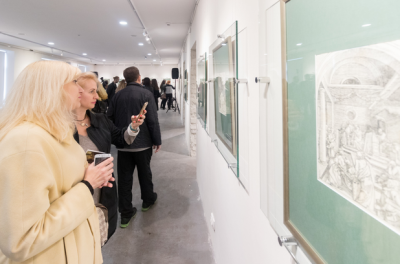 Opened an exhibition of a great artist.

The Museum of Ukrainian art in the Dnieper opened an exhibition of engravings “the Mystical and the real” legendary German artist Albrecht dürer. The event is held in the framework of the mayor of the city Boris Filatov “Cultural capital”.

Exposure in the river is 57 original engravings of the great German masters. Previously work has been exhibited in the Kharkiv art Museum. Negotiations on the carriage of engravings in the Dnieper lasted a whole year.

“This is a unique event for the city. Overall this exhibition not exit, but eventually managed to bring her into the Dnieper. The city Council put a lot of effort and it would have been impossible without the enthusiasm of the leadership of the Museum of Ukrainian art. Art is eternal. In the framework of the program of mayor Boris Filatov “Cultural capital” to present against Dnipro even more beautiful expositions,” — said the Deputy mayor of the Dnieper Alexander Sikolenko during the opening of the exhibition.

Albrecht dürer called an iconic figure in the art world, which is not inferior to Leonardo da Vinci.