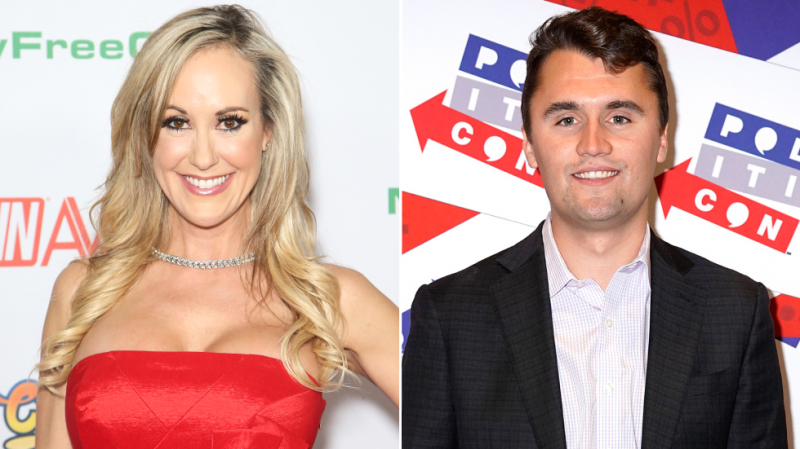 There is no question the future of the Republican Party has been up in the air since Donald Trump lost the 2020 presidential election. Will they embrace the fiery, no-apologies strategy of Trump going forward? Will they continue to worship the man and see him as their only hope for 2024? Or – and this is the worst scenario – are we about to see the Republican Party regress to a time when ‘aw, shucks’ politicians like George W. Bush were used to pitch the party’s moral high ground, launching a questionable, emotionally-motivated war and making criticism of people’s personal lives, whether it be their sexuality, past actions like abortion, etc., the center of their values?

Whatever the future holds for the party, there is one truth that should be clear to every conservative, no matter where they fall on the issues: “The Republican Party is broken.”

It’s a line recently written by Brandi Love (real name Tracey Lynn Livermore), an adult film actress who is also a vocal conservative. She has even penned pieces for the Federalist in the past. Her declaration on the Republican Party came after she bought a VIP ticket to a recent Turning Point USA (TPUSA) conference in Tampa, Florida and was quickly shown the door.

Love posted images from the conference and seemed to be a legitimate fan, even attending events and seeing TPUSA founder Kirk speak. Her tweets from the event show she’s clearly aware of the backlash she can often face among conservative crowds, breaking attendees down into “anti adult haters” and “Kid Rock conservatives.”

After her first day at the event, Love was informed that the ticket she paid for was revoked and she would receive a full refund.

Ironically, Love had just been watching Kirk and other conservatives speaking about issues that are typically important to their base: censorship, cancel culture, political correctness, etc.

“The Student Action Summit is a youth conference with 15- and 16-year-olds in attendance,” Andrew Kolvet said.

Mind you, Love was not a speaker. She was a paying attendee who handed money over to a business that turned around and made a personal judgement on her. TPUSA’s moral outrage equates to them saying that Love’s worth as a person is defined by her career choice. If they’re really this concerned about the personal actions of their paying attendees, then perhaps they should force everyone to take a morality test when they buy their tickets and make sure they are the ‘right’ kind of conservatives before taking their money.

Reactions to Love’s dismissal have only further proved her point about the Republican Party being broken. Many have fortunately rushed to Love’s defense, rightly arguing that free market conservatives who oppose modern day cancel culture should likely be opening a bigger “tent” for their party, especially during a time when Democrats have created their own morality tests for one another, constantly devouring anyone who dares take their toe off the far-left line of political correctness where misinformation on Facebook apparently kills people and critical race theory is the one thing missing from American children’s lackluster public educations.

The outrage some have shown over Love’s political views shows the sad state of affairs for the Republican Party. They are the same irrational arguments devoid of logic that liberals make when targeting anyone from Ice Cube to Roseanne Barr to Joe Rogan for saying or doing something they don’t approve of. An alarming number of conservatives feel they have the right to take this same high minded view and deem who is and who is not worthy of being ‘conservative’.

This is not only a bad look for Republicans and conservatives; it’s downright embarrassing. In 2021, we actually have men making lengthy Twitter threads about how their precious politics cannot be associated with a woman who participates in a legal and regulated business. You don’t have to like that business. You don’t even have to approve of it, but if Republicans want to differentiate themselves from modern liberals, then they need to embrace the parts of their message that makes sense and sell to younger and more independent crowds: freedom, individualism over collectivism, actually talking to people you disagree with, smaller government, lower taxes, decreased regulations… These are things you can find a hard-nosed conservative in DC to agree on, a pornstar in California, a Kid Rock in Michigan, a shock jock like Anthony Cumia, a Caitlyn Jenner, etc.

It may not be the Republican Party of old, but it’s the only future they have.

Since we’re on the subject of what is and isn’t conservative, by the way, let’s take a look at how Love responded to this situation versus all of these triggered ‘conservatives’.

Love has capitalized on everything and is now selling t-shirts on her website with the slogan: “I triggered Charlie Kirk.”

Kirk has not addressed the Love predicament through his Twitter account, but continues to put out generic right-wing messages, and other outraged conservatives have been busy ‘educating’ Love defenders on what an ‘actual conservative’ is.

People outraged by her presence in their movement echo the same sentiments crusty career politicians like Jeb Bush were spewing when Trump first came onto the scene and refused to change his brash style for politicians’ sensitive ears.

If conservatives go back to the world of old where Libertarians were treated like red-headed step children you keep in the basement and moral outrage was central to their platform, then it will all crumble. Perhaps that’s actually the future we need. If Love’s not a conservative, then neither is Trump. Neither are a lot of people. Tell them their points of view don’t matter because they don’t pass some vague moral test, and all you have left is a party full of people who just want to tell other people how to live their lives. That sounds an awful lot like the place Democrats are at these days.

Maybe they should both fall and keep on ‘canceling’ their own until there’s nothing left to cancel but themselves. Then Love and anyone else who couldn’t be embraced by what they thought were like-minded and accepting people can actually make some real progress in a post two-party world. That’s seeming more and more like it’s the hope American politics has.