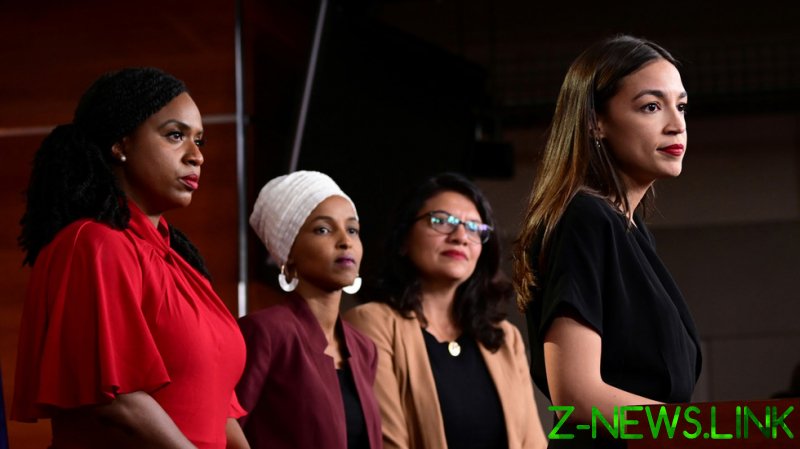 The lawmakers point to recent comments by Omar that stirred controversy even within her own party. Earlier this month, the congresswoman was accused of equating the US and Israel with groups such as Hamas and the Taliban. She later clarified the intention of her comment, made on Twitter, saying she was referring to the alleged war crimes involving both countries and groups that are currently being investigated, and called the pushback against her “shameful.”

The new resolution shows the Republicans introducing it were not satisfied with the explanation. Omar, they claim, “accused the United States of backing crimes against humanity,” Meanwhile, Ocasio-Cortez accused Israel of “human rights abuses,” Pressley compared supporting Israel to backing “oppression, violence, and apartheid,” and Tlaib accused Israel of “ethnic cleansing.”

“We cannot turn a blind eye to Members of Congress openly defending terrorist attacks by Hamas against our close ally Israel nor their dangerous rhetoric which has contributed to anti-Semitic attacks across the country,” Waltz said in a statement about the potential censure.

Democrat ‘squad’ members are frequently the target of the Republicans, but some of them have found themselves ruffling the feathers of many within their own party too, especially when it comes to their views on the conflict between Israel and Palestine.

After Omar’s controversial war crimes tweet, 12 Jewish Democrats called for “clarification” and blasted the seeming comparisons made by the young lawmaker. After Omar’s response, House Speaker Nancy Pelosi (D-California) and other Democrat leaders released a statement again condemning the comparison.

Ocasio-Cortez and other Democrats have blasted the treatment of Omar, but Pelosi was less interested in talking about the subject while making the cable news rounds on Sunday, telling CNN that Omar was a “valued” member of the party and she considered the recent statements to be “end of subject.”

While the new resolution has no official consequences, Omar has been targeted by Rep. Kevin McCarthy (R-California) in a separate effort, accusing her of “anti-Semitic” and “anti-American” rhetoric, and seeking to remove her from the Foreign Affairs Committee.