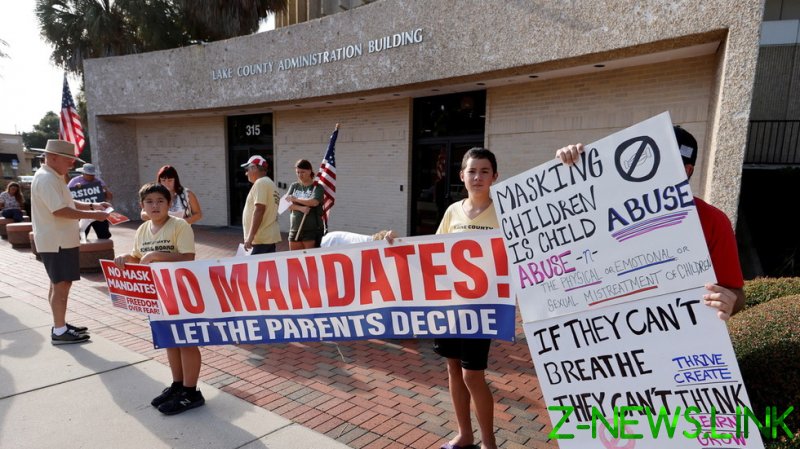 The department said in a statement on Monday that, along with the FBI, it will be determining how to assist state and local authorities in investigating rising threats against teachers, school board members, and other school faculty, which have only gotten worse as protesting parents have clashed with school officials across the country over mask mandates and controversial critical race theory (CRT) teaching programs.

“Specialized training” is also being put together to help school personnel better preserve evidence of threats made against them and train them in how to properly report them.

Attorney General Merrick Garland said in a statement that there has been a “disturbing spike in harassment, intimidation, and threats of violence” against school staff across the country.

“While spirited debate about policy matters is protected under the Constitution, that protection does not extend to threats of violence or or efforts to intimidate individuals based on their views,” Garland wrote.

The National School Boards Association (NSBA) has praised the DOJ announcement. The group previously asked President Joe Biden in a public letter for “immediate assistance” in dealing with the rising threats against teachers.

“Coupled with attacks against school board members and educators for approving policies for masks to protect the health and safety of students and school employees, many public school officials are also facing physical threats because of propaganda purporting the false inclusion of critical race theory within classroom instruction and curricula,” NSBA President Viola Garcia and NSBA interim Executive Director and CEO Chip Slaven wrote in the letter.

Last week, White House Press Secretary Jen Psaki acknowledged the issues, saying the administration was “continuing to explore what more can be done” about the apparent rise in threats.

The DOJ announcement has been met with some pushback from activists, however, who argue the majority of people opposing mask mandates and critical race theory in schools are not threatening to school staff and have been encouraged to voice their opinions at school board meetings.

Reacting to the DOJ’s move, Republican Florida Gov. Ron DeSantis has already said he “will not allow federal agents to squelch dissent” and accused Garland of “weaponizing” the department to silence concerned parents.

Other critics blasted the federal-level involvement as an overreach that treats parents as “domestic terrorists.”

Sen. Josh Hawley (R-Missouri) slammed the involvement of the FBI in a Tuesday letter addressed to Garland, saying the FBI should stay “out of regular democratic activity.”

“I certainly share your view that threats of violence have no place in this country, but the backdrop of your memo strongly suggests that your concern is not violence, but democratic pushback against critical race theory,” he wrote, adding the DOJ has not provided enough specific evidence to prove the pattern of criminal acts they claim exists.