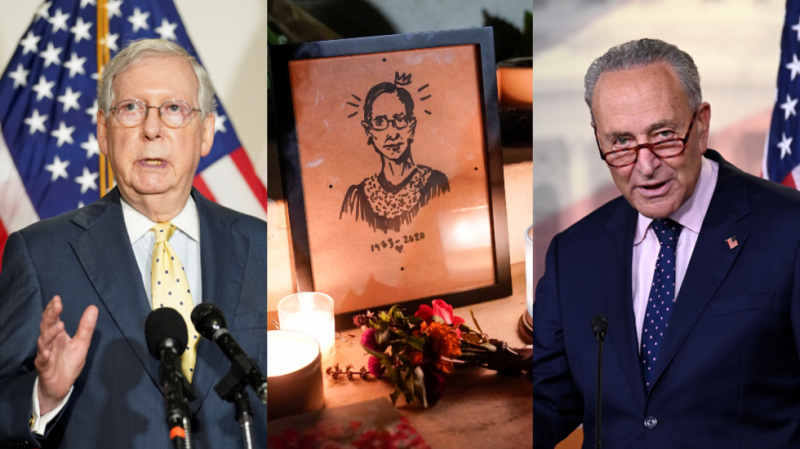 Ruth Bader Ginsburg passed away on Friday aged 87, following a two-decade battle with cancer. In a statement dictated shortly before her death, Ginsburg asked that she “will not be replaced until a new president is installed.” Nevertheless, President Donald Trump has urged Senate Republicans to vote on a replacement “without delay,” a position shared by Senate Majority Leader Mitch McConnell.

Democrats have balked at the proposal, arguing that with just six weeks to go until Trump is potentially voted out of office, “this vacancy should not be filled until we have a new president,” in the words of Senate Minority Leader Chuck Schumer.

However, Schumer sang a different tune in 2016, when Justice Antonin Scalia passed away. When President Obama nominated Merrick Garland to fill Scalia’s seat that February, McConnell – whose party held the Senate – vowed not to hold a vote until after that year’s election.

Schumer and his Democratic colleagues badgered McConnell to confirm Garland, and as McConnell held out, the New York senator reminded the Kentucky Republican that the Senate “has confirmed 17 #SCOTUS justices in presidential election years.” Schumer and his colleagues tweeted the hashtags “#FillTheSeat” and “#DoYourJob” at the GOP, calling for the exact opposite outcome to the one they now demand.

As the Senate returned from its summer recess in September 2016, President Barack Obama declared that filling Scalia’s seat should “be at the top of their to-do list.” Now, though, he wrote on Friday that “the questions before the Court now and in the coming years… are too consequential” to railroad Trump’s pick onto the bench.

Ironically, Obama pleaded that “we apply rules with consistency, and not based on what’s convenient or advantageous in the moment,” despite his total reversal of his 2016 position. Joe Biden, too, claimed that in 2016 that the Senate had a “duty” to fill the vacant seat, but argued on Friday that “the voters should pick a president and that president should pick the justices.”

Of course, the Democrats insist that they’re merely holding McConnell to his own word, which sounded in 2016 remarkably like Schumer’s and Biden’s did on Friday. “The American people should have a voice in the selection of their next Supreme Court Justice,” he said that February, hours after Scalia’s death. “Therefore, this vacancy should not be filled until we have a new president.”

McConnell claimed on Friday that he blocked Garland’s nomination because Obama was a ‘lame duck’ president, nearing the end of his final term without support in either house of Congress. Indeed, no Senate has confirmed an opposite-party president’s Supreme Court nominee in an election year since the 1880s. Yet among the GOP, there were those who vowed to play by McConnell’s rules, no matter the balance of power in Washington.

“If an opening comes in the last year of President Trump’s term and the primary process has started, we’ll wait to the next election,” Senator Lindsey Graham, a reliable ally of President Trump, said in 2018. “Hold the date.” Graham has not yet commented on whether he would vote to replace Ginsburg.

Despite all the hate it’s drawn from Democrats, there is another layer of irony to the ‘McConnell Rule’. In justifying his decision to blockade Scalia’s seat, McConnell cited the so-called ‘Biden Rule’, proposed in 1992 by none other than Joe Biden. In a speech to the Senate, Biden argued that President George HW Bush should hold off on nominating a justice “in the full throes of an election year,” warning that “we will be in deep trouble as an institution” otherwise.

Bush was a lame-duck president at the time, making Biden’s 1992 position a mirror image of McConnell’s more than two decades later. In backing McConnell in 2016, Iowa Senator Chuck Grassley said the Biden Rule was about “the principle” and “not the person.”

However, as the squabbling and backtracking over Ginsburg’s seat demonstrates, principle in Washington has seemingly always taken a back seat to political expediency.