Republicans and Democrats have opposite memories of Capitol riot – poll 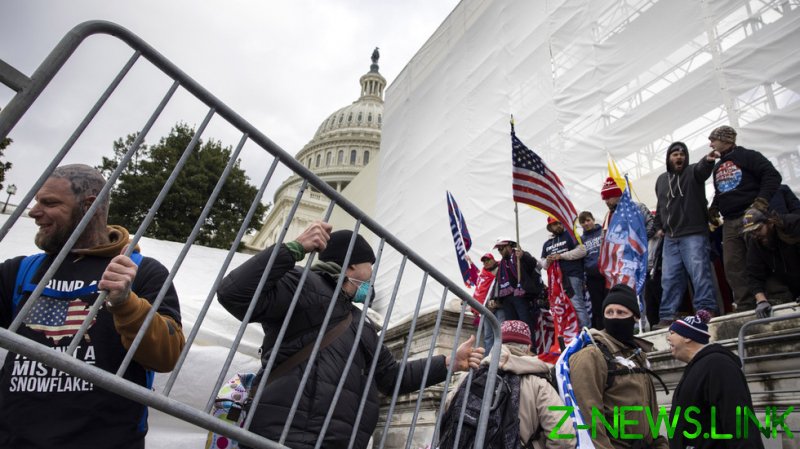 New polling has found the majority of conservatives and Donald Trump supporters believe the Capitol riot was only “somewhat” or not at all violent, while others remember the incident much differently.

The survey, released Tuesday by the Associated Press and the NORC at the University of Chicago, found 39% of Republicans view the Capitol riot, during which one protester died after being shot by an officer, as extremely or very violent.

This puts them in line with the majority of Democrats, as well as people overall, with 64% of respondents describing the day as very violent and 87% of Democrats doing the same, respectively.

The majority of Republicans, however, view the Capitol riot as only “somewhat” or not at all violent, with 32% saying they were somewhat violent and 29% describing them as not.

Overall, people were much more unwilling to argue the Capitol riot was not very violent, with 14% of people overall agreeing and only 1% of Democrats saying so.

With the one year anniversary of the Capitol riot only days away, the debate over the day’s events continues to rage on, with arguments seeped in polarization. Currently, a House committee is investigating former President Donald Trump’s alleged role in the buildup to the riot. He spoke shortly before protesters reached the Capitol in Washington, DC on January 6, continuing to suggest the election was stolen. He did later tell his supporters entering the Capitol to “go home.”

Trump and others have argued the committee is made up of vocal critics of his who are politically motivated to keep the Capitol riot in the public conversation.

While the committee’s investigation continues to split people, a majority appear to support the efforts, according to the Associated Press’ poll. Approximately 70% of respondents said Congress should continue the investigation, which has led to the subpoenas and subsequent protests of numerous Trump allies, while 28% believe they should stop.

Split by party lines, the divide becomes clear, with only 41% of Republicans saying they support the investigation, but 96% of Democrats throwing their support behind it.

The survey was conducted among over 1000 US adults and has a margin of error of 4.1%.