Home / WORLD / Reptiloids at the helm of the UN? Twitter split after CGI dinosaur lectures humans on downsides of extinction

Reptiloids at the helm of the UN? Twitter split after CGI dinosaur lectures humans on downsides of extinction 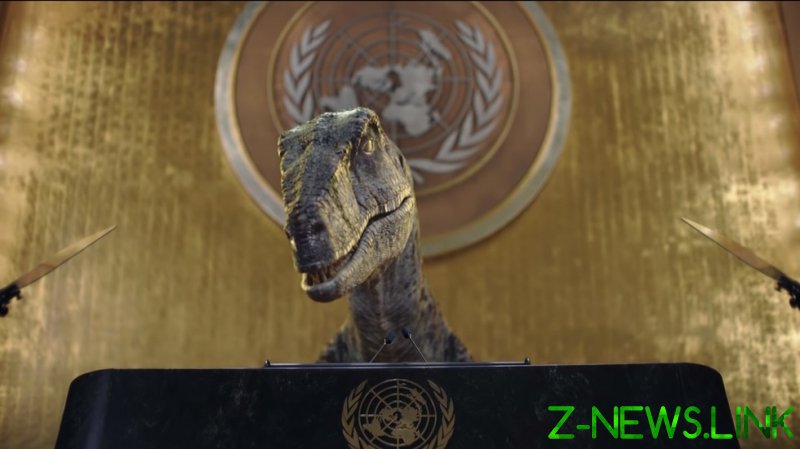 The short clip was released by the UN’s Development Programme (UNDP) as the centerpiece of its ‘Don’t Choose Extinction’ public awareness campaign. The polar bear-sized reptilian was shown startling a UN meeting with his impressive appearance and a tough-love lecture on how dying out as a species is a really bad outcome.

“At least we had an asteroid. What’s your excuse?” the dino says, lashing out at government subsidies of fossil fuels, which an accompanying UN report estimates at about $423 billion annually.

Others found it a good excuse for China-bashing, based on the country’s current contribution to greenhouse gas emissions. Or to attack both the UN and China in one package, due to Taiwan’s unrecognized status at the UN.

Quite a few found the tongue-in-cheek short film too reductive and silly to land its message properly. One snarky commenter said it reminded them of a scene in the 2006 satirical comedy film ‘Idiocracy’, which saw Americans in the distant future believing that good US dinosaurs defeated bad Nazi dinosaurs in the 20th century, which led to the creation of the UN (pronounced ‘un’).

The video’s producers definitely weren’t aiming for any pretense at scientific accuracy with their ‘Frankie the Dino’ protagonist. The surprise speaker is supposed to be a “70-million-year-old Utahraptor” who doesn’t even have any feathers – which scientists believe the real members of the species likely possessed.

“We wanted to come up with something a little bit different, a little bit engaging, and with a big message that is a message of hope,” UNDP’s communications chief Anjali Kwatra explained to Associated Press. “There is a crisis, we have to act, but we have the solutions. We know what to do and we can do it.”

The complexity of the issue of fossil fuel subsidies was acknowledged by UNDP head Achim Steiner. “Ending financial support for them in a way that is fair and equitable is a critical element of [the advocated] transition,” he admitted.

Developing countries are nowhere near their developed counterparts in terms of historic emissions, and didn’t benefit from centuries of industrialized economic growth powered by the fossils.