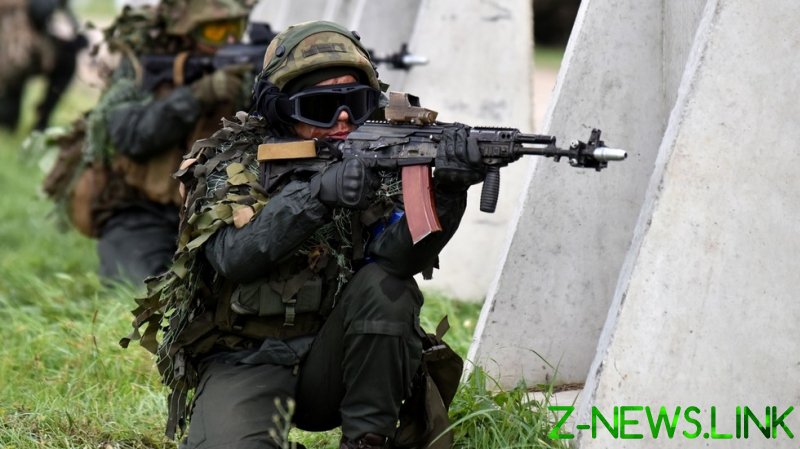 In a statement issued on Monday, the press service of the SVR said that claims troops were massing on the shared border between the two Eastern European nations as a precursor to all-out conflict were falsified. “Recently, officials in Washington have been actively intimidating the world community by alleging Russia is preparing for ‘aggression’ against Ukraine,” it said.

“According to data we have received, the US State Department is using diplomatic channels to share with its allies and partners absolutely false information about the concentration of forces on our territory in advance of a military invasion of Ukraine,” the communique reads.

The SVR went on to say that Washington is painting “a terrible picture of how hordes of Russian tanks will start crushing Ukrainian cities,” and that this is being amplified by Western media. Citing former Nazi Propaganda Minister Joseph Goebbels, the officials said that “the more monstrous the lie, the more willingly the crowd will believe it.” “Of course, such a line fits into the anti-Russian mentality of the West,” the intelligence service concluded. In addition, the service compared the situation to the buildup to a short military conflict fought against Georgia in 2008, when former President Mikhail Saakashvili began a campaign to retake territory held by separatists, before the country’s troops were pushed back by Russian forces.

Earlier that day, Kremlin spokesman Dmitry Peskov said that a number of articles alleging that an invasion of Ukraine could soon be underway were part of a “targeted information campaign.” According to him, “it’s about building tensions – it’s an attempt to portray Russia as threatening the peace process.”

His comments came just hours after Foreign Ministry spokeswoman Maria Zakharova blasted the claims as part of a “mythology” being created around Russia. “If there are facts, show them and we’ll talk. If not, then it’s time to work on the mistakes at the heart of the non-existent stories creeping into the Western press with regard to Ukraine.”

Several publications have run stories in the past several days about a possible armed conflict after Ukraine’s domestic security agency, the SBU, published what it claimed were theoretical Russian plans to invade the east of the country. Moscow denies that any such preparations are underway, with the Kremlin arguing that “the movement of some of our military equipment or army units across the territory of the Russian Federation is exclusively our business.”