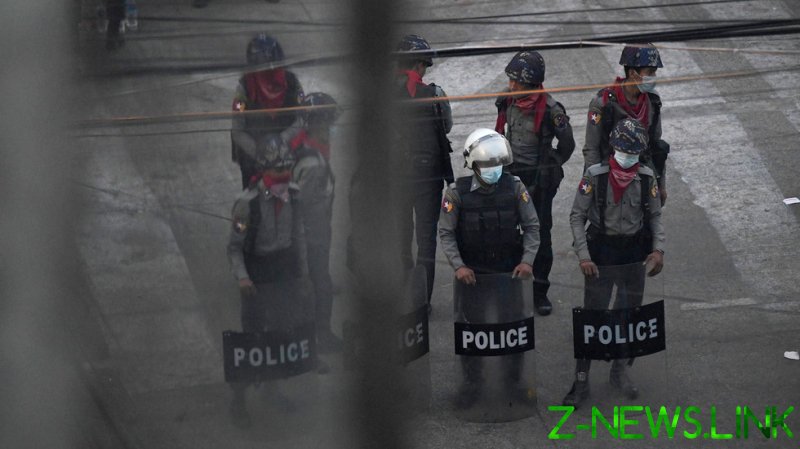 The reported casualties were a result of clashes that occurred in Bago through Thursday night and Friday, according to the country’s Assistance Association for Political Prisoners (AAPP).

Witnesses claimed that the troops surrounded the demonstrators early on Friday, using firearms and rifle grenades against them. “It is like genocide. They are shooting at every shadow,” one of the organizers of the protest told outlet Myanmar Now.

The violence in Bago, some 90km northeast of Yangon, resulted in at least 80 fatalities, AAPP said. The exact death toll, however, was hard to establish as the soldiers allegedly refused to let rescuers approach the bodies, which were later driven away.

The state-run Global New Light of Myanmar paper provided a completely different account of events, saying that only one “rioter” was killed and two others injured, with two officers also being wounded.

The newspaper insisted that it was the demonstrators who’d allegedly attacked the security forces with hand-made guns, Molotov cocktails, arrows, makeshift shields and grenades, leaving the officers no choice but to defend themselves.

Myanmar has been gripped by unrest since February 1, when the army arrested democratically-elected leader Aung San Suu Kyi and other top officials over claims of election fraud. Many people in the Southeast Asian country reject the coup and took to the streets in protest, but were met with a violent military crackdown.

If the latest casualties are confirmed, the death toll during the two month of demonstrations could reach some 700 people – those are the AAPP figures, which the military government disputes, saying that there have been no more than 250 fatalities.

Also on Saturday, between 10 to 14 officers were reportedly killed after an alliance of Myanmar’s ethnic militias, who stand with the anti-coup protesters, attacked a police station in the Naungmon area in eastern Shan state.

Tensions have been running high between the new government and the ethnic armed groups in recent weeks. The military has launched airstrikes in areas under their control, resulting in a refugee crisis.

In another development, Human Rights Watch (HRW) lashed out at the Myanmar Army for condemning 19 people to death on Friday in its first use of capital punishment since coming to power.

A military court handed the sentences to a group of people accused of kidnapping, torturing and killing a military official in the Yangon area in late March. Only two of the defendants were present at the hearing, while 17 others remained at large and were tried in absentia.

The ruling “indicates the military are prepared to go back to a time when Myanmar was executing people,” Phil Robertson, deputy director of HRW’s Asia division, said. The country last carried out an execution 30 years ago.

The use of a military court gives “no guarantees of a free and fair trial in any way, shape or form,” Robertson pointed out, suggesting that the severe sentences were an attempt to scare the demonstrators off the streets.