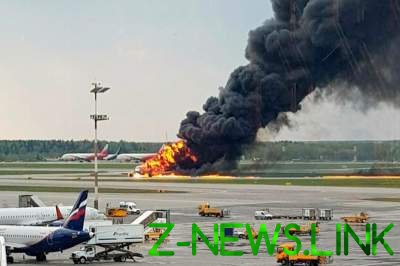 The dominant version is pilot error.

Experts agree that the crash of the SSJ-100 Aeroflot occurred most probably due to errors of the crew, who, not having developed fuel and with obvious excess of speed, landed at Sheremetyevo airport that resulted in damage to the aircraft and fire. On Tuesday, may 7, announced rossm.

According to information, the first mistake the pilots decided to fly through a storm front. Then, once in a far from disastrous situation and to disconnect the automatics they hurried to land instead of having to hold out several hours in the air and to burn the extra kerosene.

The fire on the aircraft was very strong because after the lightning strike, the aircraft landed with unspent fuel capacity, and maximum mass created additional difficulties during landing.

In the process of landing, the crew members believed to Aviaexport, demonstrated a very weak aerobatic training.

As a result of jumping on the runway many passengers who were in the rear of the plane, were injured, but because of the chance to get out of a burning liner they have virtually no indicates the edition.

Information was also received that the tests SSJ tested for lightning strikes and they do not cause fires on the aircraft and loss of control.

There are also issues for land services of the airport Sheremetyevo, which may not promptly responded to the emergency.

Media stress that definitive conclusions about the causes of the disaster will make the specialists of the Interstate aviation Committee of the Russian Federation and General of the Investigative Committee, being the expert on investigation of the terrorist attacks.

We will remind, on may 5 Sukhoi Superjet 100 aircraft EN route from Moscow to Murmansk, made an emergency landing at Sheremetyevo airport, after which he broke the landing gear and fired up the engines.