Home / WORLD / Reported disappearance of Navalny doctor sends Western Russia-watchers into overdrive… until he’s found alive and well, that is

Reported disappearance of Navalny doctor sends Western Russia-watchers into overdrive… until he’s found alive and well, that is 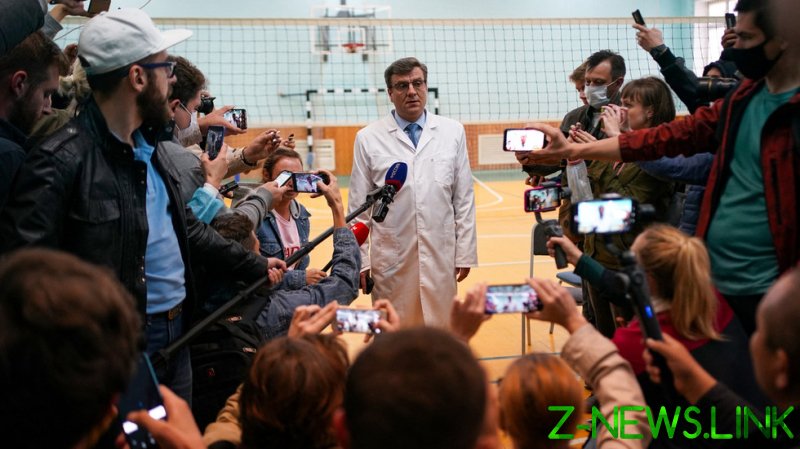 On Sunday, as Russia celebrated Victory Day with a national holiday, the Interior Ministry in Omsk put out an alert for a man in his fifties who had become separated from his companions. He had reportedly not been heard-of since heading off into the woods on an all-terrain vehicle. To make matters worse, local residents claimed to have spotted bears in the area.

Murakhovksy, who serves as the region’s health minister, is far from the first Russian hunter to go missing for a day or two while pursuing his prey. However, he might well be the first one linked to jailed opposition figure Alexey Navalny. The anti-corruption campaigner was treated at Emergency Hospital Number One in Omsk in August last year after he was taken ill on a flight to Moscow and his plane made an emergency landing in the Siberian city. Until his recent promotion, Murakhovksy was the lead physician at the hospital.

The team of Russian doctors he led initially suspected the campaigner might have been poisoned, but later announced his sudden illness could have been down to a metabolic disorder, after lab results came back negative for toxins. Clinicians at Berlin’s Charite hospital, where Navalny was subsequently transferred, went on to claim that he had been poisoned with the nerve agent novichok. Alexander Sabaev, a top doctor at the Omsk hospital, however, contested that diagnosis, saying that “as a toxicologist I am sure. There was no novichok there.”

Earlier this year, anglophone media leaped on claims that a doctor who’d treated Navalny had died in suspicious circumstances. The Sun, the UK’s best-read newspaper, asserted that Sergey Maksimishin “was poisoned to stop him blabbing about a novichok attack by [Russian President Vladimir] Putin.” The anonymous source cited by reporters said that “the reason for his liquidation was his readiness to share information about the treatment that he had access to.” This was all, for some reporters, part of a cunning masterplan by the Kremlin. A second doctor at the clinic later died of a stroke, adding further intrigue for those who saw the hand of a supposed cloak-and-dagger assassination operation in the events.

However, hospital sources were later reported as saying that “during the days that [Navalny] was being treated at the hospital, Maksimishin was on sick leave and took no part in his care.” This, strangely, didn’t prove significant enough for the outlets that presented his death as part of a shadowy plot to issue clarifications or retractions.

Somewhat unsurprisingly, Murakhovksy’s disappearance was seen through the same lens. Bill Browder, a hedge-fund manager who has led the charge on anti-Russian sanctions, said that the news was “unbelievable.” “After two doctors who treated and saved Alexey Navalny at the hospital in Omsk have died, a third has now disappeared on a hunting trip,” he added. The inference was clear, even if the facts don’t support the idea that anything untoward has happened.

Andreas Umland, a Research Fellow at Stockholm’s Centre for Eastern European Studies went further, laying the blame for Murakhovksy’s incommunicado foray into the forest with Moscow’s top domestic security agency. “The FSB’s signal to Russian society seems clear,” he claimed, “do not interfere with our matters or else.”

Despite making for a good story, the narrative was quickly shattered on Monday when Murakhovksy walked out of the woods. His wife confirmed to Moscow-based TV Rain that he had been found and was in good condition. “He does not understand the scale of the search,” she said, with the doctor unable to comprehend why a number of local agencies had been scouring the area for him.

The hysteria sparked by a man in Siberia losing contact with his fellow hunters appears to have triggered more introspection than previous cases. Oliver Carroll, the Moscow correspondent of the UK’s Independent, wrote in hindsight that “there was a lot inconsistent with the idea of him being done away with by a hit squad. He’d been promoted to local Health Minister after all. But easy narratives travel fast – especially from the mouths of cheap raconteurs.”

“In terms of other doctors too,” he added, “they weren’t actually involved in Navalny’s first line care. And both looked convincing natural deaths.”

While the coverage exposes how readily Western Russia-watchers will leap to dramatic conclusions about secret assassination plots and Kremlin cover ups, it is not yet clear if having their fingers burned by Murakhovksy’s sudden reappearance will mean commenters will exercise more caution in the future. But given how inaccurate stories often get the most clicks, it seems unlikely.