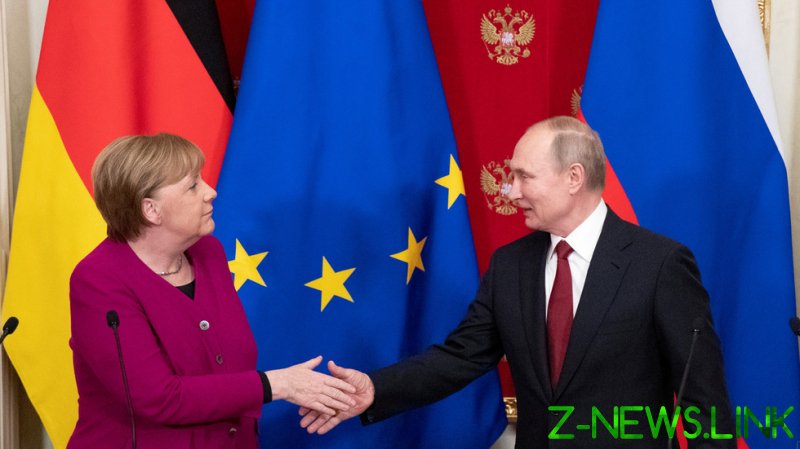 Nord Stream 2 AG and its CEO Matthias Warnig – a former East German secret agent turned investment banker – are engaging in “sanctionable activity” but the US State Department will waive those sanctions, citing national interests, and sanction “a handful of Russian ships” instead – at least according to anonymous sources quoted by Axios on Tuesday.

The report detonated like a bombshell inside the Beltway, with Republicans and Donald Trump administration officials leaping to call out the hypocrisy of Democrats, who spent years claiming the 45th president was a “Russian agent.”

President Joe Biden “is actively helping Putin build his pipeline,” complained Senator Ted Cruz (R-Texas), adding, “Objectively speaking, the Biden administration is shaping up to be the most pro-Russia administration of the modern era.”

Morgan Ortagus, spokeswoman for the Trump-era State Department, called it “another win for Russia” and added, “I’m not an energy expert, but cancelling American pipelines while approving Russian ones seems to be against our National interests…”

Secretary of State Antony Blinken vowed during his confirmation hearings to “do whatever we can to prevent [Nord Stream 2] completion,” but the Biden administration has determined the only way to stop the pipeline would be to sanction German end-users of Russian gas, Axios said. The current White House is “not willing to rupture its relationship with Germany over Nord Stream 2,” according to the publication.

The anonymous sources who spoke to Axios rationalized the decision by saying the waiver gives the US “leverage” since it can be removed at any moment, and that the Biden administration’s goal is still “to see that the pipeline doesn’t go into use” – whatever that may mean.

Standing out from the knee-jerk ‘Democrats are the REAL Russian agents’ responses from Trump administration veterans was a tweet from Richard Grenell, expressing hope that the September election would oust Chancellor Angela Merkel’s CDU and put the Greens – more amenable to US demands – in power.

Grenell was the US ambassador to Germany during the Trump presidency, and was instrumental in pressuring Berlin over Nord Stream 2. He was then promoted to acting chief of national intelligence.

Last month, the EU foreign affairs chief Josep Borrell said the EU “does not have the means and tools to decide what to do on Nord Stream 2. It is a matter of private firms and it is a matter of the Germans.” While that may have seemed like accepting the inevitable reality at the time, it takes on another meaning altogether viewed through the lens of Grenell’s words.

US arguments against Nord Stream 2 have run the gamut from economic to geopolitical. The pipeline, Washington says, would allow Moscow to bypass Ukraine and deprive Kiev of some $3 billion in transit fees each year, as well as increase Europe’s “dependency” on Russian natural gas.

However, Russia has had this ability since 2011, when Nord Stream 1 was built under the Baltic Sea. While NS2 would boost the volume of exports by up to another 55 billion cubic meters a year, that isn’t quite enough to replace the 87 billion cubic meters or so that flow through Ukraine annually.

As for the US demands that the EU “diversify” its energy supply by buying “freedom molecules” of American liquefied natural gas (LNG), they appear to be both impractical, due to prices and volumes involved, and would ironically deprive Ukraine of transit fees, too.