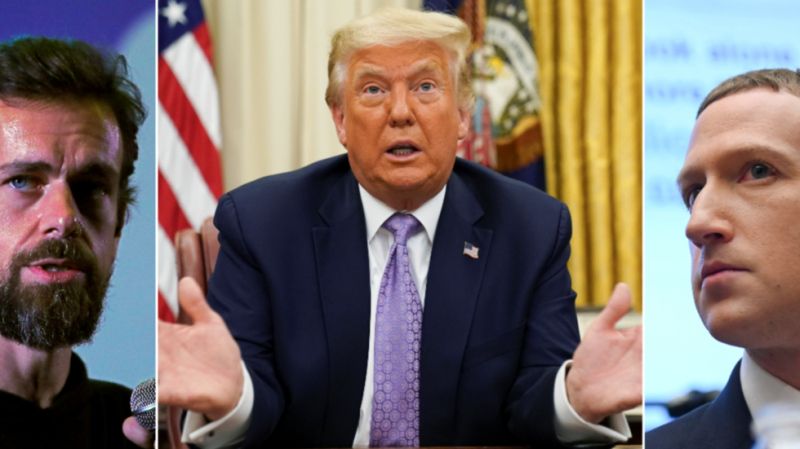 “So terrible that Facebook and Twitter took down the story of ‘Smoking Gun’ emails related to Sleepy Joe Biden and his son, Hunter, in the [New York Post],” Trump tweeted on Wednesday evening.

“REPEAL SECTION 230!!!” the president added, referring to the provision in the Communications Decency Act shielding social media platforms from legal liability if they act “in good faith” to remove objectionable content posted by users. Since then, Facebook, Twitter, Alphabet and others have invoked it as grounds to police any content they deem inappropriate – including the ever-shifting definitions of “potential harm” and “election interference.”

A Facebook executive who previously worked for Senate Democrats has openly admitted the New York Post article would be suppressed even before “independent fact-checkers” could look at it, while Twitter outright blocked the link to the story from being shared, claiming it was “potentially harmful.”

It was a drastic reaction to a story citing emails found on a laptop left at a Delaware repair shop, purporting to show communications between Hunter Biden and executives of Burisma, a gas company in Ukraine that hired the son of Barack Obama’s vice president in 2014, supposedly as protection from extortion by the US-backed government in Kiev.

“It is only the beginning for them. There is nothing worse than a corrupt politician,” Trump said cryptically in his tweet, suggesting more information is forthcoming.

Meanwhile, Senate Republicans tweeted “See you [Jack],” along with a video of unsuccessfully trying to share the New York Post story. It was aimed at the company’s CEO Jack Dorsey, ahead of the October 28 Commerce Committee hearing about censorship where he is scheduled to testify.