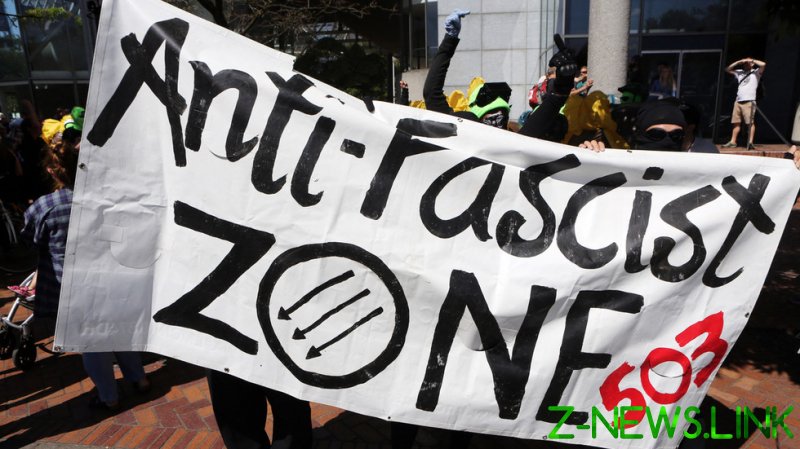 I suppose it shouldn’t be surprising that an anarcho-communist organization would not be too fond of Christians. It was Karl Marx who said that religion is the “opium of the people,” after all. It also probably shouldn’t surprise me that Portland Police would do nothing when Antifa attacks someone in that fallen city. Their inaction against the domestic terror group continues to embolden them. However, I never thought that I would see the day where Christians are specifically attacked for their beliefs on American soil. And yet, here we are, with the rights of these believers being violated by absolute scum, and all Portland Police did was sound a horn.

Over the weekend, an open-air event planned at Tom McCall Waterfront Park was hosted by Artur Pawlowski, the same preacher who was arrested in Canada for holding services in violation of coronavirus restrictions. Antifa (whose name stands for Anti-Fascist Action) immediately hit Twitter with veiled threats. Then, dozens wearing black bloc outfits and riot gear showed up and began physically confronting attendees of the event. Antifa members willingly destroyed private property by throwing it into the river, reportedly threw a flash bomb into a group of children, and even pepper sprayed a pastor as he begged them to stop the violence.

When I discussed Canada’s treatment of religious communities back in June, I was under the impression that my own nation would never allow such persecution to happen. Here we are, with that same pastor being attacked by thugs in the land of the free. The idea that these people were fascists is preposterous. Fascism is closer to what Artur Pawlowski is experiencing in Canada. Fascism is destroying the public property of other people in an attempt to intimidate them. Fascism is pepper spraying a man of God for asking you to stop the violence. Fascism is characterized by forcible suppression of opposition, and that’s exactly what happened.

It would be an understatement for me to call this horrifying. America is supposed to be a nation where free men and women can worship. This is supposed to be a nation where we don’t have to fear being intimidated because of our faith. By allowing Antifa to do what they did, the Portland Police department, and by extension the mayor’s office, have effectively endorsed these leftist thugs and their bullying of Christians within the city. Actions speak louder than words, and if the best you can do is sound a horn, your best just isn’t good enough. The chilling effects of this are even more worrisome. Is this going to be an isolated incident? Is this the next step for Antifa as an organization? Are more and more Christians going to have to worry about this group being allowed to bully them into submission?

Americans are supposed to have freedom of religion and freedom of assembly protected by the United States government. All government officials, when sworn in, are told that it is their duty to uphold the Constitution. Furthermore, when a protest becomes violent it is outlined within the Constitution that it is no longer lawful. So why is it that a Christian gathering has to suffer such intimidation at the hands of violent domestic terrorists like members of Antifa? No one should have to suffer that, and all this does for the city of Portland is turn every single cop and every single person in the mayor’s office into a giant joke with a punchline that makes all Americans look bad.