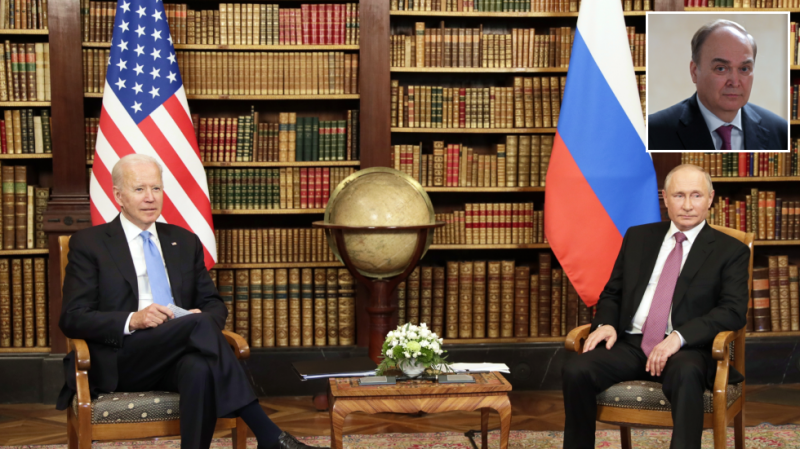 Speaking as part of an interview published by The National Interest magazine over the weekend, the envoy was asked whether there had been an improvement in bilateral ties since the pair met in Geneva on July 28. Antonov and his US counterpart, John Sullivan, flew back to their respective postings following the talks, after months without top-tier representatives in each other’s capitals. The Russian ambassador had been recalled amid a row after Biden insinuated that Putin was a “killer” in May.

“Unfortunately, the situation does not change for the better,” Antonov said. “Russian diplomatic missions in the United States are still forced to work under unprecedented restrictions that not only remain in effect, but are stepped up. Regardless of the Biden administration’s declarations concerning the important role of diplomacy and willingness to develop stable and predictable relations with our country, the Russian diplomatic presence experiences continuous strikes.”

According to him, “the expulsions of diplomats are implemented under far-fetched pretexts now and then. Last December the State Department unilaterally established a three-year limit on the assignment period for Russian personnel in the United States that, as far as we know, is not applied to any other country.”

At the same time, the diplomat reported that his team had “received a list of 24 diplomats who are expected to leave the country before September 3, 2021. Almost all of them will leave without replacements because Washington has abruptly tightened visa issuing procedures.”

“It has gotten to the point where the U.S. authorities cancel valid visas of spouses and children of our staff with no reasons provided,” Antonov said. “The widespread delays in renewing expired visas are also aimed at squeezing Russian diplomatic workers out of the country. As a result, about 60 of my colleagues (130 together with family members) cannot return to their motherland even under urgent humanitarian circumstances.”

In April, Biden signed into force a decree imposing new sanctions on Russia and expelling 10 diplomats over claims Moscow had meddled in the 2020 US presidential election and was behind the colossal SolarWinds cyber-espionage incident, which saw American government networks breached. The Kremlin has consistently denied the claims.

That month, Dmitry Polyanskiy, one of Russia’s top representatives at the UN, told RT that moves against diplomats were part of a plan to isolate and demonize his country. “Our Western colleagues and partners have a lot of other instruments in their toolbox to try to expose Russia [and its purported] malign behavior, its role as an enemy of humanity, as a rogue state or whatever,” he said. In response to the moves by the US and its partners, he said only that Moscow firmly believes “it takes two to tango.”