Home / economy / Refuse the Ukraine from the “poor” Russian gas?

Refuse the Ukraine from the “poor” Russian gas? 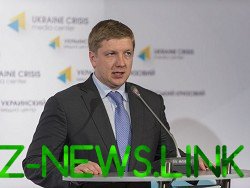 Ukraine plans to abandon gas cooperation with Russia. The country intends to stock up on liquid gas from the Americans. This was stated by the head of “Naftogaz of Ukraine” Andriy KOBOLEV.

After a visit to Washington, KOBOLEV hopes that all verbal agreements with the Americans will turn into flows of real gas. During the meeting with representatives of the USA the head of “Naftogaz” also discussed joint opposition to the pipeline “Nord Stream – 2”. In addition, the Minister of energy of the United States recognized the Russian gas is cheap, but poor quality. He recommends Ukraine to make a choice in favor of the reliability of the delivered product.

In 2020 the transit of gas from Russia will cease to operate in Ukraine. In Kiev don’t know what more to expect from “Gazprom”.

According to the Ukrainian authorities, Gazprom plays an artificial crisis to lobby for their own interests.

KOBOLEV also said that Naftogaz and Gazprom have no other options but to agree to extend cooperation. However, the Minister of energy of Russia Alexander Novak said that Russia is ready to continue gas supplies, but only on my own terms.

Andrey Kobelev believes that the development of the gas war between Kiev and Moscow are entirely possible. Whether Ukraine is so dependent on Russian gas? Or, “Naftogaz” it is able to cope on their own, finding other suppliers?