Home / economy / Reduced discounts and turned on the counter 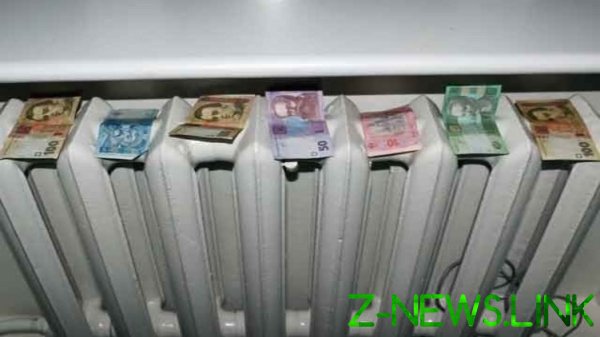 Bills for January shocked Ukrainians. Since the beginning of February, people have begun to receive bills for heat and hot water for the last month. And many of the amount was much higher than in the payment for December.

We recall that at the end of last year, the Cabinet adopted a decree according to which the utility can recalculate the tariffs for heating and hot water on a monthly basis, based on current gas prices. In December in many cities of this formula gave the locals discounts from 5% to 30%. Moreover, as stated by Prime Minister Alexey Goncharuk, it was not a one-time event — heating and hot water will be cheaper in January and February.

Last month, the Cabinet also retroactively changed the price of gas for the population. Instead of a guaranteed price of 5.5 hryvnias per cubic meter without VAT and shipping (or about 7-7,5 UAH for consumers depending on the region), the cost of gas now consider the new formula “Amsterdam plus”, which includes quotations on the exchange in the Netherlands and the cost of transportation in Ukraine. Given the collapse in gas prices in Europe, the new price is cheaper — about 6 hryvnias for a cube with all taxes.

But the numbers in the payment for January was suddenly higher than for December.

“Confirm. I, too, came. The difference with Dec +60% with the same warm weather,” — he wrote in Facebook Kristina Hakobyan.

Such complaints now — the mass. Moreover, in the capital and in the regions.

“I’ve heard that heating will become cheaper by 4% In December 28 hryvnia per square. In January 38 hryvnia,” — outraged resident of Kherson.

“We do no allocation received, even for December,” — said a resident of Poltava Irina.

“Country” understood why bills for heating and hot water rose again, and what happens with the promised government discounts.

Margin for gas and weather

The tape of social networks now, all in the payment. People simply can not hold resentment.

“What happened? In January the heating twice Dec. The weather was almost identical. This heating season I was able to indications of the house counter, but only “sposito”. Difficult to verify”, — says the inhabitant of Kiev Elena Litvinova.

“Pokraschennya” clear: +60% relative to December. Bills my dad. Persuaded not to pay, but he’s old school,” — said a resident of the capital Elena Gavrilenko, put in evidence a photo already paid bills for December and January. They show that the amount in Dec 1079 hryvnia, and in January 1646 hryvnia.

That people massively complain about the high January bills, we also told BP MP Oleksiy Goncharenko. The subject slips in Parliament was raised at a recent hour of questions to the government. What the Minister of energy Alexey Orzhel replied briefly: “Sort it out”.

The first explanation for this large difference in the payment for December and January, which comes to mind — cancelled the discounts in Kiev in December amounted to 22-23% of the standard tariff.

But, as have assured us in “Kievteploenergo” allocation discount was not only for December but also for January.

“Compared to the base rate in January, the heating in Kiev fell by 18%, hot water — 16%. The cost of a Giga-calorie of heat energy in houses with meters made 1356,62 1654,41 hryvnia is UAH. For houses without meters, the cost of heating per square meter will be 29,93 of the hryvnia against the standard rate of 38.5 hryvnia. The cost of hot water is also reduced about 16 hryvnia. The total amount of the allocation 326 million. Today it is the highest figure in Ukraine”, — said “the Country” in a press-service “Kievteploenergo”.

But, as can be seen, the allocation is still less than in December (18% instead of 22% heat). This explains the higher price of gas. In December gas for the population released in 4276,69 hryvnia per thousand cubic meters, and in January (even the new formula) — at 4650 USD.

According to public utilities, there is another explanation of the increase of sums in the January payment.

“It is incorrect to compare the charges for heating and hot water in 2020 with the same months of past years, as tariffs are changed annually. Also it is incorrect to compare charges January 2020 December 2019 — the formula for calculating includes average monthly temperature in December was 2 degrees higher than in January (+2.7 degrees and +0.8 degrees, respectively)”, — explained in “Kievteploenergo”.

However, according to the analyst of Institute of strategic researches Yury Korolchuk, bills for January is still too high.

“They would be normal for frosty months, but January it was relatively warm,” he says.

One possible solution — the excess supply of heat. This is evidenced by economist Yuri Havrylchenko, who received payment for January almost 50% higher than in December.

“Yes, yesterday in my apartment was +28. And what I can do? Windows pootkryvali?”, — said the expert.

The majority of Kiev cannot regulate heat consumption, you have to pay for the amount of heat that they serve the vendors.

Yuri Korolchuk said that there may be two explanations.

First, the utility is not at risk to change the temperature of the coolant, because its reduction increases the probability of accidents and faster is the corrosion of pipes. Second try to burn as much gas as possible. Interested in the latest and “Naftogaz”, which is pumped in underground storage is relatively expensive gas.

According to all forecasts, in the summer in Europe, gas prices will fall even more, so Nacu profitable as quickly as possible replace expensive gas in storage is cheaper.

And you need to urgently sell off the expensive gas and time left not so much — in fact, the active heating season ends in March.

Questions to bills for January have almost all the cities of the country. So, inhabitants of Odessa in February, will come only discount for December, which they at the time did not wait.

KP “Heat supply of Odessa city” reported that the session of the city Council February 6, decided to change the accrual in December 2019. However, the discount is small. The heat will count on the ratio 0,9173, that is, Gcal is 1229 hryvnia will have to pay 1127 UAH, and per square meter is 30,76 UAH 28.2 hryvnia. Saving on average a girl in 50 squares will be about 130 hryvnia.

When Odessa citizens will receive discounts for January and will they actually — remains an open question. There should be a separate decision of local deputies — now in the bills for January.

KP “Kharkiv heating networks” announced the reduction in January of the heat tariff of 14.4%, and for hot water — by 12.7%. For comparison: in December the discount was more than 23% for heating and 20% for hot water. In Kherson the January discount — only 3.4% (although in December it was around 8%).

In “Revitalizing” said that the December bills reduced by 20.05%. But it was due to such reduction of losses by 11.3 million, as suggesting to reduce the accrual because of cheaper gas, the authorities did not take into account the price rise of other components (wages, expenses for repairs, etc.).

The utility has appealed to local authorities to compensate them for these millions in losses. And if you do not get the money, threatening to expose consumers to the full cost of heating and hot water in hindsight. As decisions on the money yet, the issue with the January discounts too hung in the air.

In “Poltavateploenergo” we were told that the issue with the January discount should decide “in days” of local authorities. Itself discount is likely to be, but how significantly will reduce the rate, is unclear. In December Poltava no discounts do not got. The utility said that has taken into account the decline in gas prices and established this savings of more than $ 70 million in economic justification of tariffs for heating, which was filed in NERC.

As already mentioned, the Country, the rate of heat as a commodity to Poltava already increased, but not significantly — only 60 UAH per Gcal. It is valid only for state employees. To an increased price tag involved and for the population, the regulator must still approve the tariff for heat as a service, and this has not happened yet.

“That is, cheaper gas Poltava, too, will see in the payment, but later”, — reported in “Poltavateploenergo”.

Nikolaev housing and communal services told us that they did not plan to revise tariffs for heating and hot water, as they have, and so unprofitable. In “lvovteploenergo” told us that in December have given the people a discount of approximately 26%. But January is not known. And this despite the fact that by 20 February, the people already have to pay for bills last month.

That is, a decision on the recalculation will take very quickly — in just a few days, or no discount will be or they will, but late, and will only appear in the payment for February.

That is, as can be seen, discounts in January in many cities were not as generous as in December. And in many cities still have not determined whether prices generally, or the locals will have to pay the full rate.

It turns out that the government now in the new one you want to include all available means of pressure on local authorities to convince those to give people discounts.

Most likely, the same situation will be repeated in the subsequent months of the heating season in February, March and April.

“None of the current tariff was not reduced. For December gave a discount. But no guarantee that the same will happen in January. However, so far the government has not dealt with the tariffs had not conducted their audit and not found out whether they inflated and how it hasn’t changed the principles of tariff”, — said the head of the tenants Union of Ukraine Alexander Skubchenko.

Therefore, even in those cities where the discount given the size of the set at their own discretion. And often even with one hand write out discounts and other include cheating. In the end people can’t understand why for a warm January, they have to pay much more than in December.