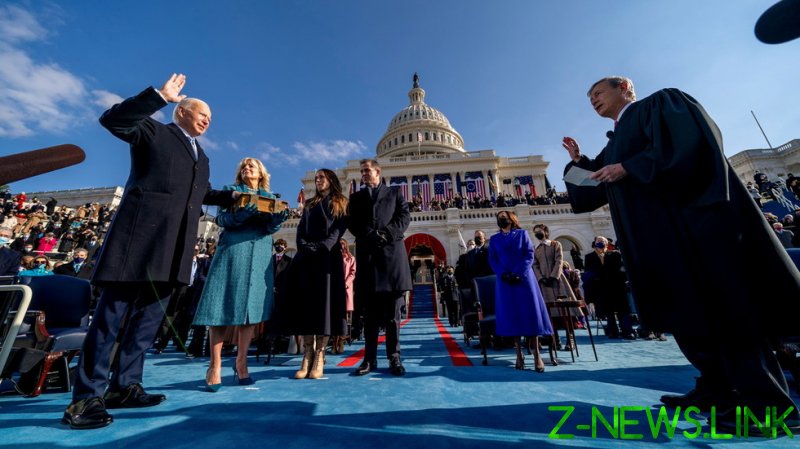 100 days of business-as-usual Biden: Meet the new boss… same as the old boss.

Whether it’s a hillbilly lothario, a silver-spooned faux cowboy, a community-organizing con man, a pompous pompadoured reality TV buffoon, or a dead-eyed, hair-sniffing establishment towel boy from Delaware on the throne, the American empire will relentlessly keep slouching along belching out its toxicity upon the globe.

The last Irish Catholic American president went to Dallas and returned in a body bag, but Biden won’t suffer that fate since he’s a shameless Washington whore who slavishly fellates corporate America and the military-industrial complex.

Biden’s first 100 days have seen the pandemic, the migrant ‘children in cages’, and America’s supposedly horrendous wealth inequality, largely vanish from the headlines. Since no substantial policy changes have taken place to mitigate these problems, however, it seems the most effective member of the administration may actually be (no surprise), the mainstream media.

In addition to covering up the challenges Biden’s failed to solve, the media’s kept quiet about messes the administration has created. From a disastrous capital gains tax proposal, to migrants overwhelming our borders, it’s clear that if Biden’s team isn’t taking any action, they’re taking the wrong action.

Biden’s first 100 days have been defined by sending US money to other countries, firing American workers, forcing community-destroying ideas on us, while attacking people who work and put money in, and rewarding those who do nothing and take money out. He’s acted like a king, not a president, by not passing laws but signing executive orders instead. How can the country survive with such bad leadership in the long run?

Joe’s concerned about his place in history, but he’s definitely headed towards a historic presidency: He’ll be remembered as the president that engineered the destruction of a once-great nation.

Joe Biden was inaugurated before an empty Mall with 25,000 National Guard troops occupying Washington, DC. Established ‘equity’ as the guiding principle of government. Abolished the 1776 Commission and reversed a ban on racial stereotyping. Canceled the Keystone XL pipeline and rejoined the Paris Climate Accord. Imposed a federal mask mandate. Opened borders but denied that caused the surge of migrants. Hyphenated the administration to Biden-Harris. Has Harris take calls with foreign leaders. Endorsed corporate boycott of Georgia. Called the US systemically racist after the Chauvin verdict. Backed DC statehood and packing the Supreme Court, while flirting with ending the Senate filibuster.

Joe Biden sold himself as the genuine article, a solid gold nugget that would replace the ‘fool’s gold’ that had occupied the White House during the proceeding four years. One hundred days into this erstwhile American revival, all the Biden administration has to show for their efforts are some manufactured ‘feel good’ moments and saccharin Twitter memes proclaiming, “America is back.” The reality is far different – the Biden-led US has been shown to be a failing, impotent has-been, lectured to by both China and Russia for failing to recognize the fact that the days of the unilateral superpower are over.

There is no real ‘Biden presidency’ – it’s more like government by committee, with Kamala Harris taking calls from foreign leaders and doing the important stuff while Biden makes pitiful grasps at coherence on air, making up words and mutilating others.

The Biden administration knows the Titanic is going down but is disinterested in anything other than propaganda constructed to hide that fact. Saving face is more important than saving lives in a White House where most of the staff are pushing 80 – a government of short-termers rarely works out well for those who have to clean up after them.

If I could sum up the first 100 days of Biden’s presidency in one word, it would be bumbling. Given that Congress is so close to deadlock, he entered office as close to a lame duck as you can get. His policies have been simply to undo everything Trump did, even though it’s hurt the economy badly. His handling of the border has been a nightmare, and Kamala Harris’ Joker-like cackling doesn’t help. The administration feels hostile to Americans, and even Biden’s dog is a jerk. It feels like a White House run by people who have potatoes for brains.

Biden has failed to deliver his singular promise of ‘unity’ that the fractured nation desperately needs in these tortured post-George Floyd times. Instead of looking at the current spate of police killings as symptomatic of a violent, out-of-control gun culture, Biden’s bowed to the radicals in the ranks, blaming the street epidemic on ‘systemic racism’. This misdiagnosis of the problem has cleared the way for ‘critical race theory’, a dastardly idea that says all white people are natural-born racists. The tone has been set for the remainder of Biden’s presidency, guaranteeing more domestic disorder and even disaster down the road.

Biden’s first 100 days on the home front have been OK – but not enough. He’s managed to get the country’s Covid-19 vaccination drive on track, pass another round of stimulus and is planning major economy-related legislation. But all of these things are drops in the bucket compared to the monumental, systemic problems the country’s facing. On foreign policy, Biden’s team is a case in point for the old cliche that you can change the party but not the policy in Washington. He’s recklessly upping tensions with countries like China and Russia in a way totally indistinguishable from his predecessors.

Mumbling through press conferences, tripping up Air Force One steps, and forgetting what a State of the Union Address is, Biden’s fumbled his way into the admiration of a propaganda-spewing media. Meanwhile, a politburo is actually running the country by executive fiat – killing thousands of jobs in the oil industry, rejoining the Paris Accord, and promising to halve carbon emissions by 2030, all over a “climate emergency” premised on leftist catastrophism; killing women’s sports by catering to trans activists; opening the southern border and precipitating an immigration crisis; and extending the Covid-19 state-of-emergency. A good start for leftist totalitarians.