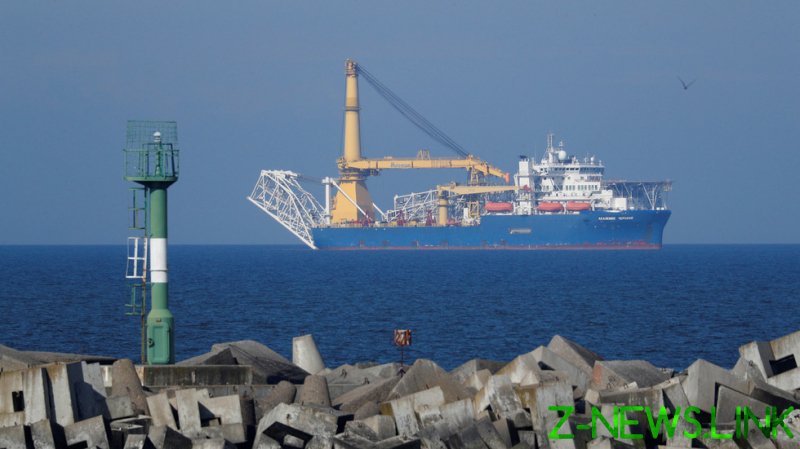 Meeting in Brussels on Wednesday, the European Parliament weighed two separate sets of remarks relating to Russian energy policies. These remarks encapsulated the diverging European views over the implications of Nord Stream 2, a Russia-to-Germany underwater natural-gas pipeline system being built in the Baltic Sea.

One view is that the project of Russian state-run energy giant Gazprom endangers European energy security. It was contained in a motion for a resolution cooked up by several of the parliament’s main political groups. Presenting a one-sided brief on tensions in Ukraine as caused by Russian interference, against this backdrop the motion demanded “that the EU should reduce its dependence on Russian energy” and urged all member states “therefore, to stop the completion of the Nord Stream 2 pipeline.”

The other view – that a private energy-infrastructure project cannot justifiably be the province of EU foreign policy – was delivered by EU foreign affairs chief Josep Borrell. He said that Nord Stream 2 “is a controversial infrastructure… But it is a private endeavor. The European Union does not have the means and tools to decide what to do on Nord Stream 2. It is a matter of private firms and it is a matter of the Germans.”

Though Borrell’s stance is the more reasonable, it has done little to quell outbursts of anti-Russian hysteria over the gas pipeline that have been cropping up with alarming frequency on both sides of the Atlantic, sowing dissension at all levels of the European-American alliance.

Calls to thwart sensible business deals in order to exert political leverage are, as in the case of the European Parliament’s recent motion, seriously misguided. But they are a commonality among certain MEPs and their counterparts in Washington who seek to blame Russia for European or American problems.

Portrayed by certain EU and US lawmakers as a means of endangering European security, in reality Nord Stream 2 helps meet Europe’s increasing demand for natural gas. It is an expansion of the original Nord Stream (or Nord Stream 1), which connects Russia and Germany via twin pipelines under the Baltic Sea, transporting upwards of 50 billion cubic meters of natural gas to Germany per year since it came online in 2011. In 2020 alone, the pipeline transported 59.2 billion cubic meters (bcm) of natural gas to European consumers.

Nord Stream 2, which is almost complete by now, would double the capacity of the entire pipeline system.

The German government of Angela Merkel endorses the project, and two German companies – Wintershall and Uniper – are both major investors in it. This position, based on geographic and economic calculations, ought to be respected fully by other EU members and by the US, as the reasoned stance of a government with the largest economy in Europe, supporting a Russian-German business deal that has brought in over 1,000 companies from 25 countries for its implementation.

Instead, Washington has badgered Germans for the deal, which it sees as hostile to American interests, simply because these pipelines involve Russia cooperating with European countries in a way that the US itself is not poised to do. US officials have been pressing for Europe to import more liquefied natural gas (LNG) from the US, calling it “freedom gas” even though EU countries have already freely chosen to source roughly 39% of their gas from Russia, with only 6% coming from the US.

Trump’s move was part of a chain of jingoistic sanctions and bluff used against Russian operators of the project and European partners over the course of his presidency. He had earlier criticized NATO Secretary-General Jens Stoltenberg, implying that German payments of “billions and billions of dollars” to Russia for needed gas constitute a “very inappropriate” security threat to the integrity of the transatlantic military alliance. Stoltenberg countered by saying, “It’s not for NATO to solve that issue.” Moreover, paying a country for goods or services that your country cannot supply as efficiently on its own is not a security threat: it is the essence of international trade.

But Washington’s treatment of this business venture as a geopolitical threat keeps finding new means of expression. A 2019 sanctions bill against Nord Stream 2 approved by Trump called the pipeline extension a “tool of coercion.” In reality, the US sanctions are all seriously undermining US-German relations and putting German lawmakers on alert against attempted “coercion” coming from the US, not Russia.

Opposition politician Steffen Kotre, who serves as the Alternative for Germany (AfD) energy spokesman in Germany’s lower house, said in February that with sanctions against Nord Stream 2, the US is “acting against free competition and posing as a colonial ruler.”

These divisive tactics of political blackmail over the business project are continuing under the administration of President Joe Biden.

Even though Nord Stream 2 was not included in Biden’s list of Russian entities sanctioned in April, White House Press Secretary Jen Psaki has indicated that the US president considers the project “a bad deal for Europe,” ignoring the fact that the people better placed to judge the deal’s usefulness are the Europeans who are actually funding and implementing it. The White House is also facing pressure from Congress to act on Russia’s project.

This intransigence only frays Berlin-Washington ties further and hardens Merkel’s resolve to see Nord Stream 2 through, as a commercial project that aids the prosperity of Germany and her European neighbors. Defending Berlin’s cooperation with Russia, she said “the gas delivered through Nord Stream 2, which isn’t yet flowing, is no worse than the gas from Nord Stream 1, that which flows through Ukraine, and that which comes across Turkey from Russia.”

The undersea pipeline, then, is one among several means of enhancing European energy security rather than increasing European “dependence” on Russia. That is especially true in light of the mess in Ukraine to which the EU has contributed, where politics have intruded on energy supply with harmful consequences. The Kiev government – backed by the EU and IS – has boxed itself into a corner by alienating east-Ukrainian separatist regions and escalating military tensions in the process. This raised security concerns over the 40 bcm of natural gas per year that Russia is allowed to transit through Ukraine to Europe under a deal signed in 2019.

With Nord Stream 2 poised to increase volumes of natural-gas deliveries to Europe on a more-secure route, potentially offsetting any volume drawdown through Ukraine, the project’s development should be welcomed as a strategic pivot that benefits both Europe and Russia.

However, the political agitators who only see it as evidence of further Russian ‘meddling’ are using rhetorical hot air to score cheap political points, by attempting to shift around blame for a repolarization that has already occurred. Washington and anti-Russian European politicians have lost the battle to orient the EU’s energy mix away from Russia, and it was a battle they should never have been fighting. The operation of Nord Stream 2 would not only raise the volume of natural gas piped into Europe, it would also lower consumer gas prices on the continent. Importing more liquefied natural gas (LNG) from the US, on the contrary, would raise those prices.

This harmful use of an economic project as a political tool has exposed EU and US disunity over relations with Russia. It is this type of reckless posturing that Ngozi Okonjo-Iweala, the head of the World Trade Organization (WTO), has specifically warned against, as a trade-disruptive measure that weakens cooperation based on economic interdependence. Speaking to EU officials in a virtual summit on Monday in reference to EU sanctions over China’s alleged misconduct in Xinjiang, she said, “there is a tendency sometimes to use the WTO or trade as kind of a weapon to solve these problems, which are not originally trade-related.”

The foolishness of sanctioning China over alleged human rights abuses in Xinjiang is the same as that of sanctioning Russia. In the former case, the measures needlessly antagonize a country with an economy crucial to global economic recovery, while in the latter they needlessly interfere with an enhancement of Europe’s energy supply.

If the current US administration actually wanted to restore their relationship with Germany “after four years of abuse by the previous administration” as one official has claimed, they would concede that Russian gas and infrastructure are better situated to meet German energy demand than are distant US natural-gas reserves, and would shift their attention to practical areas of US-German trade cooperation.

As many German officials are well aware, turning gas pipelines into politicized carrot-and-stick maneuvers is the type of foreign policy that erodes trust within alliances. If US leaders really wanted to cultivate Germany as a partner, and if the EU as a whole really wanted to bolster its international weight, both would begin by respecting Berlin’s sovereign decision on Nord Stream 2. Instead, empty Russia-baiting rhetoric is interfering with prosperity-enhancing decisions by an ally that should have been left to proceed unhindered.