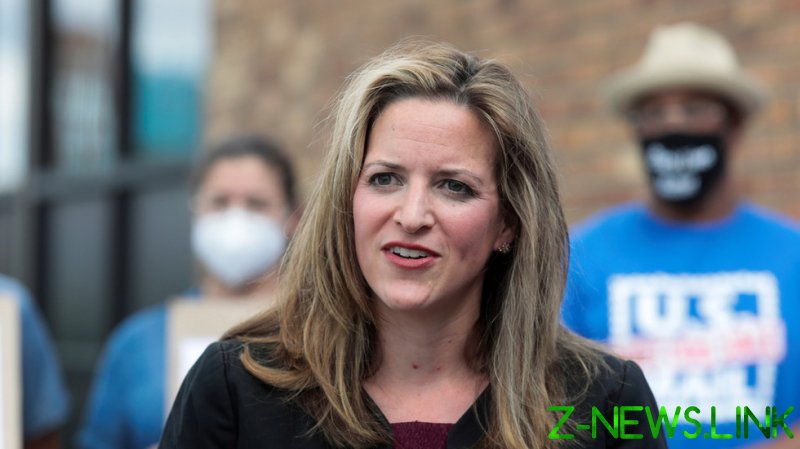 Michigan’s Democrat Secretary of State Jocelyn Benson said dozens of armed people stood outside her home on Saturday night, shouting obscenities and chanting into bullhorns just as her four-year-old son was preparing to watch ‘How the Grinch Stole Christmas’. The protesters insisted that the results of the presidential election be overturned, she said, adding that “the demands made outside my home were unambiguous, loud and threatening.”

The protesters targeted Benson after conservative media reports said Michigan’s Board of Elections – under her leadership and allegedly in violation of a legislative order – directed county clerks to delete all election-related data from their computer systems. She has also been accused of giving Michigan voter data to left-wing activist group Rock the Vote, and sending unsolicited absentee ballot applications throughout the state without regard for voter eligibility.

President Donald Trump’s campaign has filed lawsuits in Michigan and other swing states, alleging that hundreds of thousands of fraudulent votes were used to steal the election on behalf of Democrat Joe Biden.

President Donald Trump’s campaign has filed lawsuits in Michigan and other swing states, alleging that hundreds of thousands of fraudulent votes were used to steal the election on behalf of Democrat Joe Biden.

Michigan Attorney General Dana Nessel and Wayne County Prosecutor Kym Worthy, also Democrats, called the protest at Benson’s home “mob-like behavior” and “an affront to basic morality and decency.” They added, “This disturbing behavior masquerading as protest should be called out for what it is and roundly condemned by citizens and public officials alike.”

Democrat supporters also rallied to Benson’s defense. Media outlets such as CBS News and MSNBC referred to the state official being threatened with violence, while the Independent called the protesters an “armed mob.” Sherrilyn Ifill, president of the NAACP’s legal defense fund, called for “bipartisan condemnation” of the protest. “Jocelyn Benson is a superb public servant, and it’s tragic that she and others have to endure this menacing,” she added in a tweet, while New York Times writer Kathy Gray referred to the “current and sad state of the discourse.”

California Secretary of State Alex Padilla said Benson was being threatened “for doing her job and doing it well.” Civil rights lawyer Kristen Clarke agreed, saying “any elected official with an ounce of dignity who cares about public safety and democracy would condemn this too. Silence is complicity.”

But conservatives argued that no such condemnations were made by Democrats when left-wing groups targeted politicians and other people with intimidating and sometimes violent demonstrations. In August, for instance, a group stood outside US Senate Majority Leader Mitch McConnell’s home in Kentucky calling for the Republican to be murdered. One of the participants said, “Just stab the motherf**ker in the heart, please.”

Antifa rioters in Portland attacked the building where the city’s mayor lived. A St. Louis couple was indicted on weapons charges for brandishing their guns after Black Lives Matter protesters broke through the gate of their private subdivision in June and allegedly threatened to burn their house down and kill them.

Even random residents of US cities have been targeted this year. BLM demonstrators in Portland marched through residential areas late at night in August, shouting at residents through bullhorns and shining lights into windows. That same month, BLM demonstrators in Seattle went into a residential area and demanded that white people move out of the neighborhood and give their property to blacks.

After some of Benson’s defenders called for state police or the National Guard to crack down on pro-Trump protesters, one Twitter commenter said: “Funny how the defund-the-police and government-is-fascist crowd suddenly want police and military when it isn’t your side. Dems started the at-home harassment. Reap what you sow.”

Others pointed out that, unlike previous actions by violent left-wing groups, the Benson protesters decried by media outlets didn’t loot, damage property, or harm anyone.

Beyond remaining largely silent about this year’s wave of violent protests, some Democrats have even condoned confrontations, leading to harassment of Trump administration officials. US Representative Maxine Waters (D-California) called on her supporters in 2018 to harass members of the Trump administration when they’re seen in public, “create a crowd” and “push back on them.”

One observer suggested that the shoe should now be on the other foot: “As Maxine Waters says, give them no peace.”