Initially, the brand Realme was conceived as a subsidiary offshoot of OPPO, engaged in manufacturing budget smartphones. But something went wrong: the company was separated from its “parent” and began to produce flagships with the speed gun in the beginning of 2020 and all by announcing the productive smartphone in the world! In the meantime, the super-camera is still only going to Chinese factories, the hearts of users vengeance conquers the flagship end of 2019 – Realme X2 Pro. The recipe for success here is pretty simple: take all the most advanced technologies to deliver minimal price tag and have a little listen to their consumers. 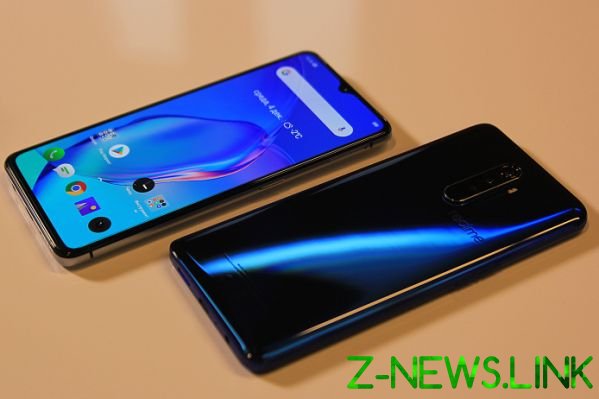 Equipment
Inside the white box has almost everything you need for happiness: the Realme X2 Pro smartphone, the silicone case to him, pasted the screen protector, cable, USB Type-C, charger SuperVOOC 50 W, SIM clip, and manual. You can find a smartphone in colors Lunar White and Neptune Blue. 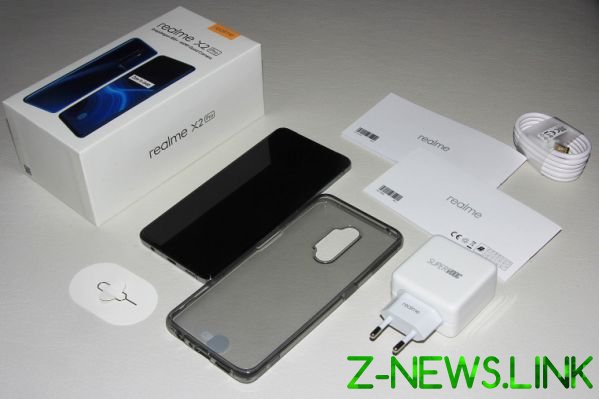 Design
The exterior of the phone is pleasant: between the two staklenim panels (Gorilla Glass 5) is lined with aluminum frame and mother of pearl “back” shimmers in the light. Like all modern flagships it perfectly collects fingerprints, but play it good camouflage. A block of four cameras located at the center of the smartphone and sticks out from the body approximately a millimeter, close by is the double flash. Index finger it can confuse the camera with a fingerprint sensor, but the latter is on the other side of the smartphone, and in a few days you get used to it. 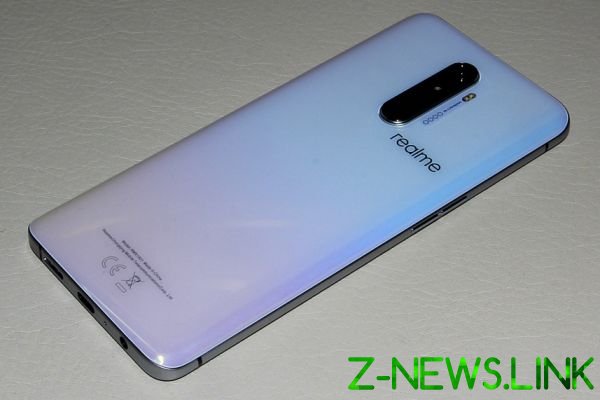 On the front panel it is possible to note the smallest frame (3.5 mm on three sides and 5 mm from the bottom), keyhole under the frontalka and wide (42 mm) speaker. Heeding the voice of reason, the designers Realme placed “on opposite sides” the lock button (on the right) and swing volume (left). Card slot found on the right side, but, unexpectedly, no microSD (only two nanoSIM). Of course, I know that 256 GB is the “score” is difficult, but since folk want a smartphone to do, then please don’t take we have a favorite slot. 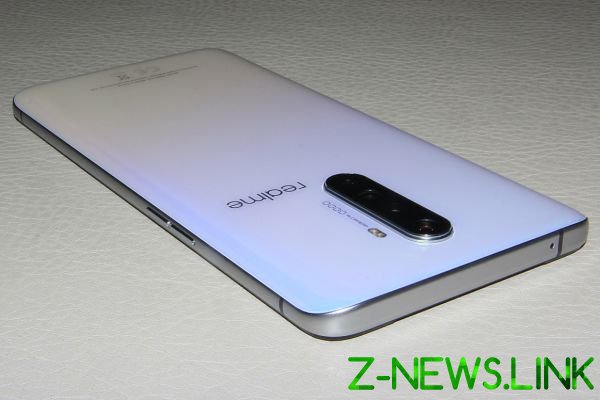 Below there is the main speaker, USB Type-C connector and (Hooray!) audio connector, which all the polls are “cut” in their flagships. One microphone was placed above and below. Although the smartphone was really great: 161x76x8,7 mm and weighs 199 grams, in his hand he before is convenient due to the smooth transitions, wide sidewalls and aspect ratio 20:9. Because of simple reason to carry it without a case is not recommended. 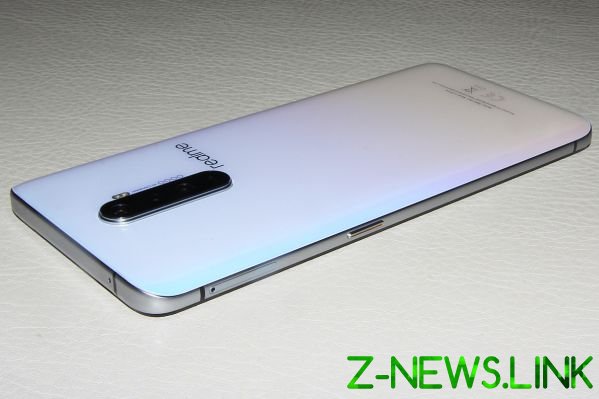 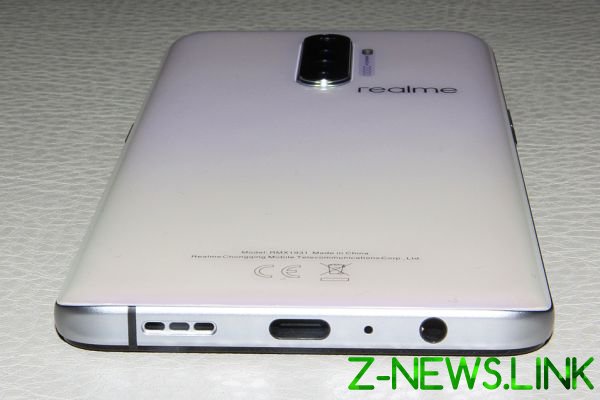 Screen
91.7 per cent of the front surface is a huge 6.5-inch screen with AMOLED-matrix with a refresh rate of 90 Hz. The last “trick” allows you to display the animation more smoothly, but instead “requires” a larger drain on the battery. The resolution is 2400×1080. The display provides wide viewing angles and infinite contrast. Between the layers is no air gap that reduces glare and the colors look rich and bright, but if, suddenly, some people prefer more subtle shades, then there are color temperature and saturation. Coverage corresponds to the sRGB preset to “soft colors” and significantly wider than the in “bright colours”. The screen supports display HDR10+. The brightness range from 2.3 to 520 CD/m2, this means that the gadget will be comfortable working in the night and in the bright sun, there is a adjustment on the light sensor. Thanks to the option “No flicker at low brightness”, eyes will be tired much less. 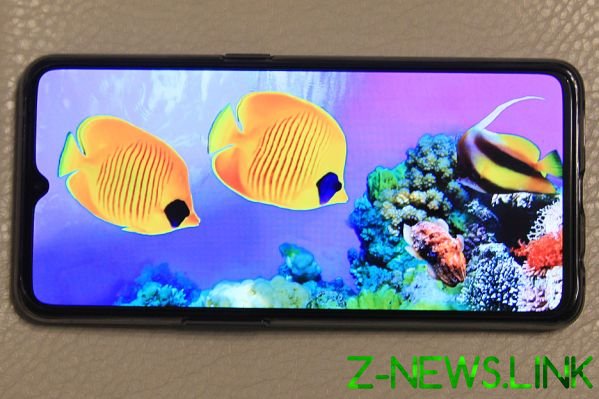 It would be foolish to install AMOLED-matrix, and not to take advantage of it: the screen supports the option Always On Display, and a wrapper enclosing “dark theme”. Podkrovny the fingerprint scanner of the 3rd generation is triggered almost instantly, and when the hands are wet, it “insures” unlock face. The screen caused the oleophobic coating. The display is then according to its characteristics is not inferior to top-end gadgets. 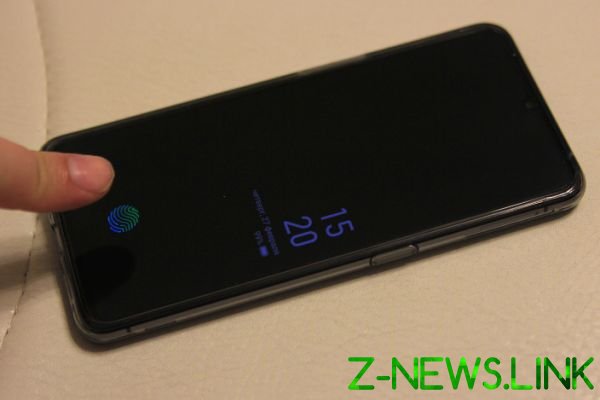 Hardware
The “heart” of Realme X2 Pro is the top-end eight-core chip Qualcomm Snapdragon 855+ made for 7-nanometer technology (1 core Kryo 485 Gold 2,96 GHz + 3 core Kryo 485 Gold 2,42 GHz + 4 cores Kryo 485 Silver 1.8 GHz). Graphics accelerator Adreno 640 works with all modern versions of the graphics API. There are models with the configuration 8/128 GB and 12/256 GB, and the memory’s not what aby, and the fastest – UFS 3.0. So from the understanding of all this power, the phone did not smoke, use liquid cooling, which does not allow the temperature to rise above 36 degrees, and, judging by the tests, the throttle does not exceed 15%. All modern games (PUBG, Real Racing 3, Shadowgun Legends, Injustice 2 and many others) to work smoothly at maximum graphics settings, but the benchmarks give a record of “parrots”.

With wireless interfaces here, too, everything is in order: dual-band 802.11 ac Wi-Fi, Bluetooth 5.0, and even about NFC forgot. A modem supporting LTE Cat.20 capable of delivering download speed up to 2 Gbit/s. Navigation module works with all current systems, and literally 5 s, determines its position in space. But 5G networks there is not yet supported – will have to wait for “big brother” in the face of the Realme X50 Pro. 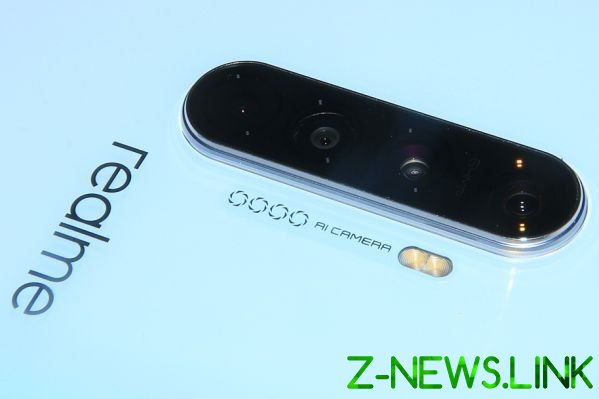 The phone is very good and loud stereo speakers with support Dolby Atmos. For wireless headphones supported audio codecs aptX HD and LDAC. One more stroke to the portrait of the mobile – high-quality tactile Tactile vibration of Engine.


Camera
The regiment kvadraturnykh smartphones arrived. The main module here (highlighted by a gold rim) uses a 64-megapixel sensor Samsung GW1 and a six-element lens with an aperture of f/1,8. Thanks to the technology Bayer Quad 4-in-1, neighboring megapixels are combined into one, reducing the resolution to 16 MP. In the settings, however, you can disable this option, but detail is not particularly increased, but the file size will increase significantly. In the end the game is “multiply by 4, then divide by 4” is more like a marketing ploy, and it happens in almost all modern smartphones. Removes the module is good, but if a lot of light, and just fine, but still cannot compete with the recognized photofragment. Loved the quality of the photos in “Night mode”. Well, for those who want to steer the situation, it is possible to put your creative ideas in “expert” mode with full manual control. You can still add “richness” by making, for example, the food more appetizing. Of course, there is also a HDR mode. 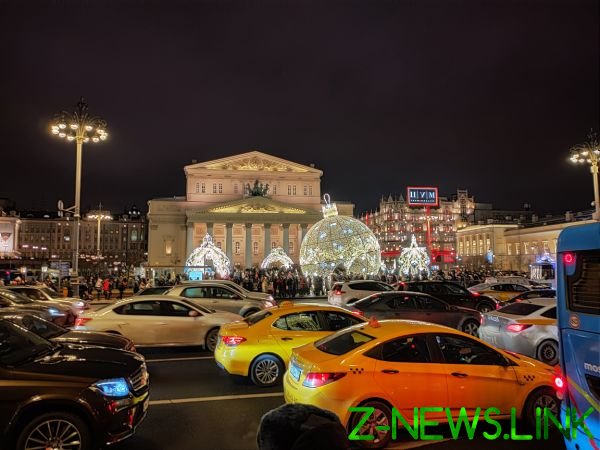 The second module of 13 MP equipped with a lens aperture of f/2.5, and allows to realize a two-fold optical zoom and 20x hybrid. To admit, the photos here come out much worse than basic. In the end, the quality kropotovo images main camera, and shot on the telephoto comparable. 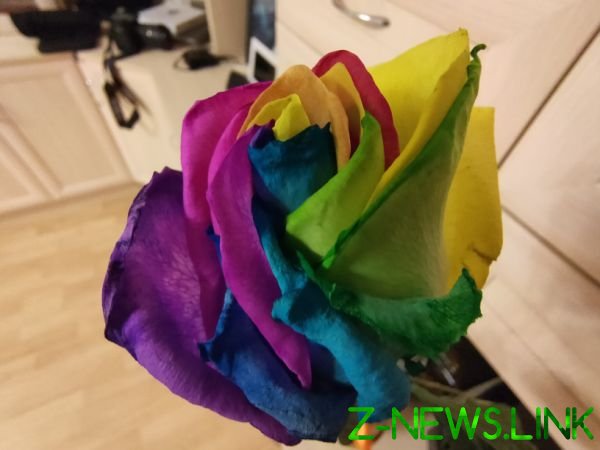 Ultrasonically module of 8 MP is equipped with a lens at 115° and an aperture of f/2,2. As for shooting all cameras use phase detection autofocus, it allows the third chamber to execute the macro. The quality of the music is not perfect, but when you have to photograph a bug or, on the contrary, to place in the frame of a large object – it. The fourth module is a depth sensor that is used to create portraits, and this “trick” takes place as people and any other objects. 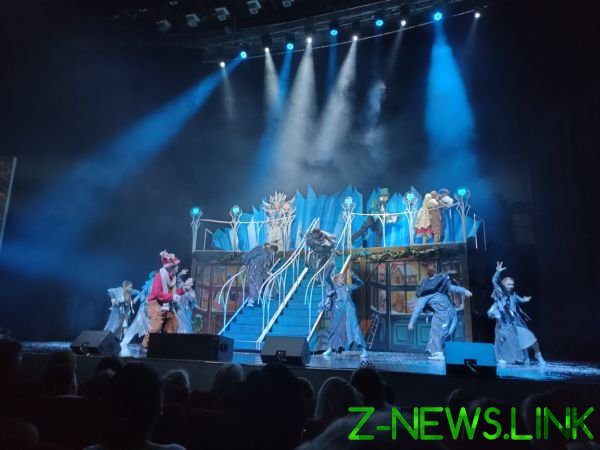 Videos are recorded at a maximum resolution of 4K@60 fps. The quality is quite decent, though inferior to the leaders, the sound goes without distortions. Supported 10x hybrid zoom. Available the ability to record videos in fast and slow motion (up to 960 fps) modes, but with poorer quality (720p). Works well with digital stabilization. 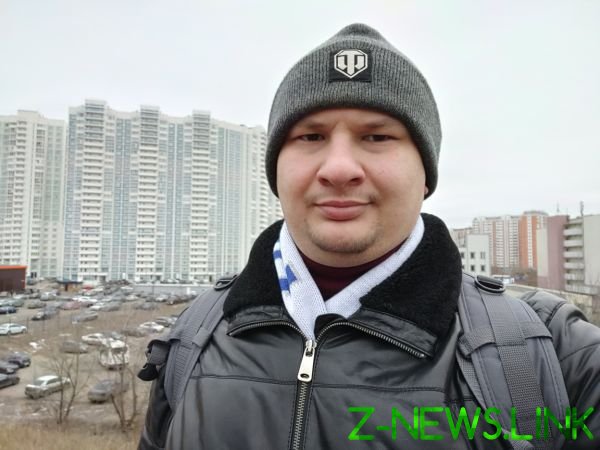 Front camera module Sony IMX471 has a matrix of 16 megapixels and a lens with an aperture of f/2.0. There is an intelligent algorithm of beutification that produces improvement for 296 points on the face. In portrait mode the blurring occurs carefully, there is here and its “Night mode”. The recording quality is excellent – hitonari will be happy. Videos are recorded at a maximum resolution of 1080p@30, and quality not much stands out.


Soft
Unfortunately, its flagship Realme did not release with the new operating system and continues to “feed” us with promises in the near future to update the firmware. We believe that it will be so, but in the meantime will have to settle for 9 Android with ColorOS 6.1, inherited from the smartphone OPPO. In my opinion, shell, combining the advantages of Android and iOS you easy, fast and beautiful.

Here has a “Game mode”, which not only increases productivity but also protects against overheating, allows you to receive calls without leaving the game, may block the brightness change, dynamically change the resolution of apps to save battery and limit the network access for other users to uploaded a channel. Own intelligent assistant will determine the number of steps, will lead to a separate screen contact and latest album with the photos or know the weather forecast. However, it does not prevent Google Assistant, which is invoked by holding the power button.

Of the features I want to note the presence of the gesture controls, split screen, unlock dual touch, automatic answer when bringing the phone to your ear, a screenshot with three fingers, fast running apps off of the phone and cloning customers ‘ social networks. And the shell allows you to customize the interface to suit yourself: change the number of icons on the screen, change fonts, and so on. The attention paid to security: the system prevents scanning for passwords and unauthorized recording of the screen.

Autonomy
Productive “iron” and the big screen take your – records in terms of autonomy smartphone is not intended. Its battery is 4000 mAh discharged in the test from 100% to 20% over 13 h 25 min. In the reading mode is 19 hours, enjoy the video about 15 hours, but productive of the game “planted” the whole charge in just 6 hours In total, battery Realme missing more than a day of hard operate, which is the average value of the indicator. And that’s where really Realme X2 Pro puts the record is while charging: the adapter 50 W allows to fully restore the battery power in just 34 minutes! On the top is strange that almost no need to wait.

Now let’s summarize. Before us is a smartphone with good design, working on top-end hardware (and in benchmarks it bypasses many of the more expensive competitors), with great screen and sound. On quality of shooting it is not much inferior to other flagships and charging speed noticeably exceeds them. As a bonus, there’s NFC and audio Jack. The price of a Junior version (8/128 GB) fell on the Russian market to 32 000 rubles. In fact, even here it is difficult to find any drawback to put on other scales. It is this flagship I’ve been waiting for: the smartphone for the money went just perfect, and while Realme is holding a bargain price, it is necessary to use it. 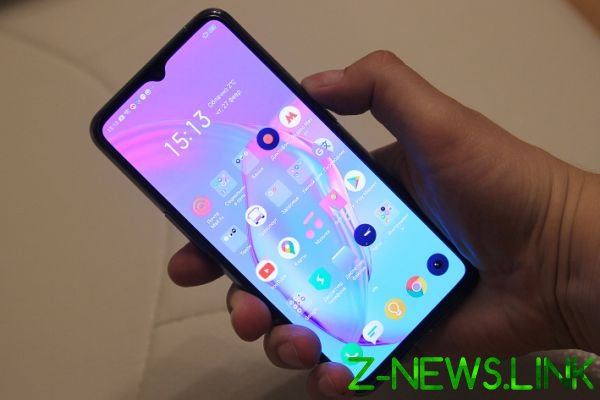