Home / WORLD / Ready for Polexit? Warsaw’s populists are heading for the mother of all showdowns with the EU. And no, it’s not Russia’s fault

Ready for Polexit? Warsaw’s populists are heading for the mother of all showdowns with the EU. And no, it’s not Russia’s fault 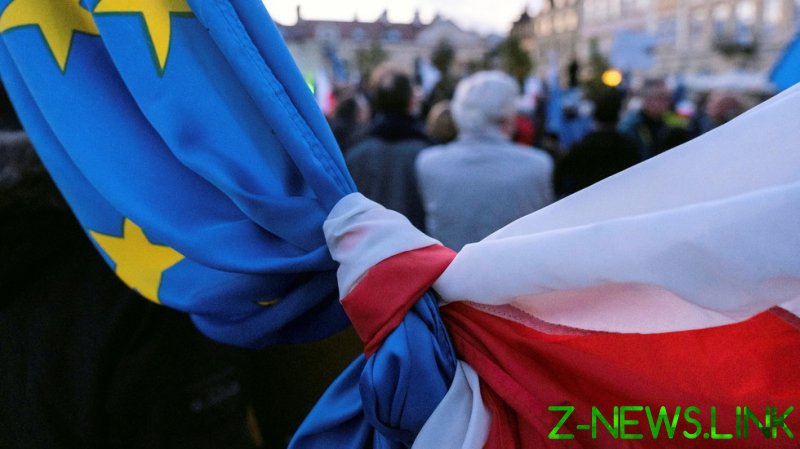 Le Monde, the French newspaper of record, has pointed out that the Constitutional Tribunal’s move last week is unprecedented. This is no exaggeration: Poland’s judges have attacked the foundations of the EU, producing, as even Germany’s cautious Der Spiegel recognizes, an “enormous explosive potential.”

It is true that, in the past, an important French court has already questioned the primacy of EU law, and the German Constitutional Court has contested findings of the European Court of Justice. In these cases, Brussels responded with formal procedures against the breach of EU treaty provisions.  But no member country has ever assaulted the principle of the primacy of EU law as directly as Poland, at least while intending to stay in the bloc of 27 member states.

International reaction has been critical. There is much talk of the threat or beginning of “Polexit,” that is Poland leaving the EU like Tory Britain. France’s minister for European affairs sees a real risk of Poland’s “de facto exit.” A commentator in Poland’s liberal Gazeta Wyborcza fears that this need not even happen by deliberate design. Hardball nationalist brinkmanship and rhetoric escalating out of control might be enough.

Inevitably, Russia has been blamed (again) as well. By the usual freewheeling speculation, Russia and its President Vladimir Putin are identified as benefiting from this conflict between Poland and the EU, for instance by Poland’s former president Aleksander Kwasniewski. Therefore – hey presto! – “the Russians” simply must be responsible.

Yet, in reality, this assault on the EU comes from Eastern European nationalists who hate Moscow even more than Brussels, and can never get enough of waffling about “hybrid war” and “defending all of Europe” against danger from the East. If the EU is looking for someone to blame, that would be itself. Perhaps it wasn’t such a good idea to quickly admit countries such as Poland and Hungary without waiting for their democracies to consolidate or thinking about what to do if they ever revert to nationalism and authoritarianism? If this is a nasty surprise, Brussels has sprung it on itself.

But there is a crucial difference between Britain and Poland. In the pre-Brexit UK, there was a sizable constituency for leaving among the general population, but in Poland overwhelming majorities are in favor of the EU.  Nearly twice as many Poles trust Brussels than their own government in Warsaw. The demonstrations against the Tribunal that have taken place in over a hundred Polish cities and towns are only the tip of that pro-EU iceberg.

Lech Wałesa, a symbol of the Polish Cold War struggle against communism, has accused the current government of splitting Polish society as no enemy has ever done. It will therefore be impossible to sell Polexit as patriotic in the style of the UK Conservatives. Instead, it would have to be imposed on large numbers of Poles who are now voting for the government but might change their allegiance if cajoled into a costly exit.

With all their cheap nationalist tubthumping, the right-wing populists in charge in Warsaw may still shy away from such a high-risk strategy, at least for now. As for their center-right main opponents, the Civic Platform party – now led (again) by former Polish prime minister and EU Council president Donald Tusk – they are staunchly pro-EU anyhow.

Yet, in any case, this is a severe crisis likely to get worse, for three main reasons. For one thing, it has deep roots. The conflict between the EU and Poland’s government, long dominated by the nationalist-populist Law and Justice (PiS) party, goes back half a decade. During this time, Brussels has ever more openly criticized the fact that PiS has been undermining the rule of law, especially by manipulating the composition of just that Constitutional Tribunal now taking the lead in challenging the EU.

It is telling that the head of the tribunal, Julia Przylebska, is an associate of PiS co-founder and eminence grise Jaroslaw Kaczynski. The EU treaty provisions attacked by her and the now-thoroughly stacked tribunal are those that the European Court of Justice invoked to contest PiS’ assault on judicial independence.

Secondly, Poland’s relationship with the EU under PiS is tense for other reasons as well. Some Polish nationalists have tried to declare what they call LGBTQ-free zones, i.e. areas of explicit discrimination by sexual orientation. Poland is also defying the EU over an especially dirty lignite mine and power station.

In general, PiS has always openly rejected many of the largely centrist-liberal values that dominate in the EU. In fact, the Polish nationalist-populists used to promise their voters that they would imitate the explicitly illiberal policies of Hungary’s Viktor Orban. They have kept their word, including by attacking media pluralism using Orbanist methods. The results are obvious now, in a wave of chauvinistic propaganda, accusing domestic opponents of serving Germany and, in essence, treason.

The third reason why this crisis will escalate further is that it cannot be papered over. It is a clear sign of this fact that the European Commission has responded calmly but without any give, noting that the primacy of EU law remains non-negotiable and that it will defend it.

Therefore, Poland is now likely to face a formal procedure regarding the breach of EU treaties. Another procedure already in motion could, ultimately, lead to Poland losing its voting rights inside the EU. More importantly, it is also probable that the Commission will continue what it has already started doing, namely, withhold tens of billions of euro in funding – and counting. Because of the complexities of EU financing, there may be some delay with further cuts, but when they come, they will be painful.

Put differently, while the EU usually loves deals, including murky ones, the tribunal’s challenge is too fundamental to be dealt with in that manner. If tolerated, it would encourage other member states to try to have it both ways, too – all the advantages of being in the EU, but none of the losses of sovereignty that it demands.

The escalation strategy of PiS and its allies is all the more self-defeating because Russian-Polish relations, never simple, are at a historic low, as pointed out a few months ago by the Russian ambassador to Poland. Whether regarding the interpretation of recent history and the treatment of monuments, energy politics, Ukraine, Belarus, or sanctions, Warsaw is among the harshest critics and most determined opponents of Russia.

Yet the more Poland annoys the rest of the EU, the less its voice will matter, including on all the issues on which it opposes Russia and seeks to make other EU members, which are more open to compromise and cooperation, oppose it just as much.

And, finally, Poland has nowhere to go: In the still unlikely case of a Polexit ever becoming reality, then, notwithstanding a NATO membership that Poland should not overestimate, it would be a lonely, crisis-ridden state, sandwiched between a disillusioned EU and a Russia that Warsaw does not trust at all. Imagine a mess similar to where Britain is currently – but in a much worse geopolitical position to boot. And for all that, Polish nationalists would have themselves to blame.

Beyond the obvious economic rationale, politically, the EU, in all its shapes back to the original 1951 European Coal and Steel Community, is based on three real pillars: the supranational, that is explicitly sovereignty-diminishing cooperation between governments and institutions they set up; bureaucracy; and fudge. There is nothing ironic about this observation: Polities have been built on much worse, for instance, slavery and ethnic cleansing (in the case of the original USA), authoritarianism and a rigid ideology crippling the economy (that would be the late Soviet Union), or, in an especially brutal variant, genocide, ethnic cleansing, and conquest (Nazi Germany, for as long as it lasted).

Yet the fact that the EU, despite the hysterical accusations of Brexiteers and other nationalist populists, is a comparatively mild-mannered beast (as long as you are not a migrant or refugee) is a low bar. Its ongoing failure to organize itself well is its single biggest failing. Back in the Cold War, when it was built in a Western European niche of becalmed geopolitics, that chronic weakness did not matter much. In a post-Cold-War world of increasing competition, crisis, and conflict, it does. The cohesion of this up until now unwieldy, inflexible, and slow assembly of states will have to greatly increase to meet this challenge. But to make that happen, it will require a hard, uncompromising line against governments who want EU benefits while refusing to share some of their sovereignty (as they signed up to do) and trying to change the EU from within so as to make it fit their own, authoritarian ideas.

In the case of Poland, the EU still has good reasons for strategic patience by both taking a clear stance and biding its time: Warsaw may still end up again in the hands of less irresponsible rulers. But in the not so long run, the EU should, ideally, equip itself, at long last, with an expulsion mechanism.

The current set-up makes no sense: To only be able to admit, yet never to exclude is a one-way structure that encourages bad-faith actors to cheat by adopting EU principles before being allowed to join and then renege on their commitments once in. Brussels must make up its mind that those who do not want to share their precious sovereignty even while having agreed to do so, should stay out, leave, or be made to leave. Ultimately – and this is the hard truth the bloc cannot fudge away any longer – nationalism, when practiced in earnest, and Brussels, are principally irreconcilable.