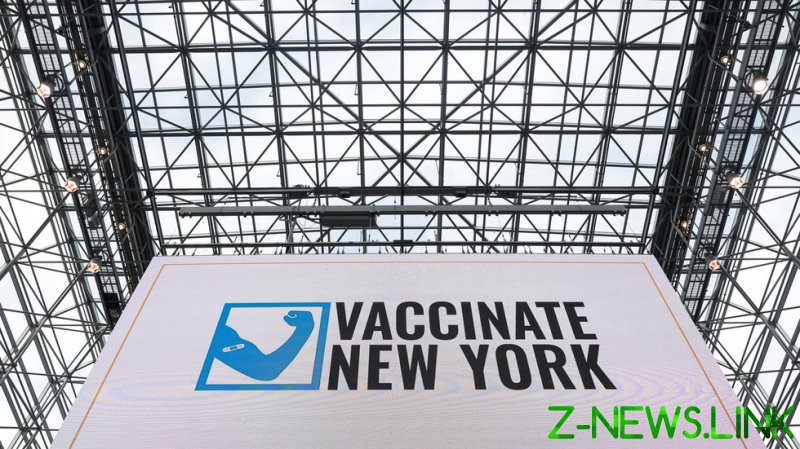 “I’m calling on all New York City employers, including our private hospitals, to move immediately to some form of mandate,” de Blasio said on Friday in a radio interview. He called on employers to impose “whatever the maximum you feel you can do.”

De Blasio’s comments come amid rising US Covid-19 infections, as the reportedly highly contagious Delta variant of the virus spreads across the country. With unvaccinated Americans entrenched in their hesitancy – a newly released Associated Press-NORC poll shows that 80% who haven’t gotten the jabs don’t plan to do so – Democrat politicians and public-health experts are increasingly calling for local mandates that leave people virtually no choice but to get the shots.

After more than six months of New York’s Covid-19 vaccine rollout, during which residents were given “every form of incentives,” the city has “reached the limits of a purely voluntary system,” de Blasio said.

“Any type of mandate helps. It will move the ball. It will get more people vaccinated,” he added.

Both President Joe Biden and de Blasio have fallen short of their vaccination goals. The mayor had aimed to have 5 million New Yorkers fully inoculated against the virus by the end of June, but the current total is less than 4.5 million. Nationwide, the flow of Americans getting Covid-19 shots has plunged since reaching a daily peak of 4.6 million in April, averaging around 500,000 a day in recent weeks, as those who wanted the jabs have already had plenty of opportunity to get them.

Earlier this week, De Blasio ordered that employees of New York’s public hospital system and Health Department clinics need to get vaccinated or be tested for Covid-19 every week. He admitted that he hoped such testing would become so tiresome that recalcitrant employees would find it in their interest to be inoculated, and he wants the private sector to use the same sort of tactics.

“We need to get more serious than ever about vaccination,” de Blasio said. “If everyone was vaccinated right now, we would not be having a conversation about the Delta variant. This is a pandemic of the unvaccinated.”

De Blasio’s mandate push marks a shift from his past stance, as he insisted that the city could persuade vaccine-hesitant residents to get the jabs through awareness campaigns and incentives, including prize drawings for those who cooperated. About 70% of New York adults have gotten at least their first vaccine dose, just above the 69% national rate.

Ironically, the mayor pitched “freedom” as a motivation for forcing people to get the shots, which have received only emergency use authorization from the FDA. “If people want freedom, if people want jobs, if people want to be able to live again, we have got to get more people vaccinated,” he said.

Dr. Anthony Fauci, Biden’s chief medical adviser, and Andy Slavitt, a former Covid-19 adviser to the administration, are among those who have similarly suggested using mandates by employers and local governments to make life less tenable for those who choose not to get vaccinated.

CNN’s Washington bureau chief reportedly offered much the same sentiment in an email that was accidentally made public this week, saying, “This is the point re: carrot vs. stick. The Carrot is no longer going to work.”

De Blasio plans to ratchet up the pressure on vaccine-hesitant New Yorkers over time, at least with city employees.

“I’ve been very explicit about the fact that this is a beginning and we’re going to climb up the ladder of measures to address this situation,” he told WNYC radio host Brian Lehrer. “We’re going to be making announcements piece by piece.”