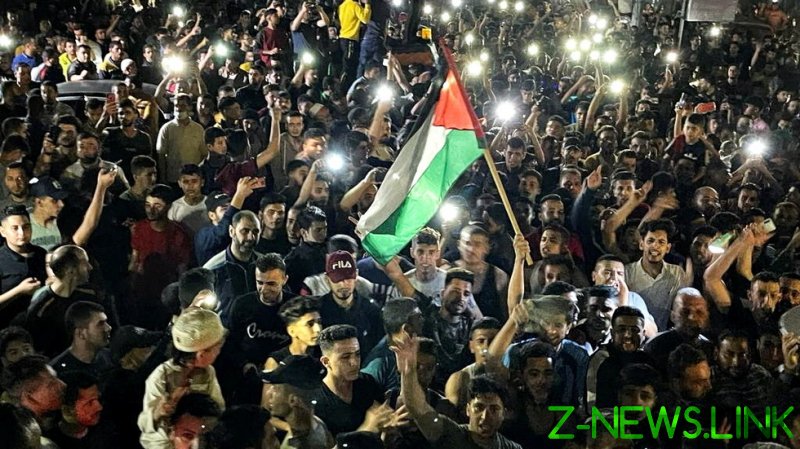 Street parades and impromptu fireworks displays erupted in Palestinian cities early on Friday morning, hours after a ceasefire agreement mediated by Egypt was accepted by Israel and armed groups in Gaza.

Throngs of revelers were seen marching through Rafah and other cities in the hours before dawn, many hoisting Palestinian flags and chanting slogans to celebrate the armistice, which took effect around 2am local time.

A party-like atmosphere also broke out in occupied East Jerusalem, which saw its own crowded gatherings and noisy fireworks shows.

The city served as a flashpoint in the last round of violence, with days of heated protests over upcoming evictions of Palestinian residents meeting harsh police crackdowns. An Israeli incursion at Al Aqsa mosque, the third holiest site in Islam, prompted the first volley of projectiles from Hamas militants last week, after which Tel Aviv pounded Gaza with hundreds of air strikes as rockets continued to fly.

In the West Bank, which also remains under Israeli military occupation, crowds were seen on the streets of Ramallah, while a small convoy of vehicles waved flags through the Dheisheh refugee camp, located near the city of Bethlehem.

At least 232 Palestinians, including 65 children, were killed over 11 days of fighting, while nearly 2,000 were injured, according to Gaza’s Health Ministry. Israeli officials say 12 citizens perished, among them a soldier and two youths.

Around 450 buildings across the Gaza Strip were destroyed or severely damaged in Israeli air raids, including apartment blocks, media offices, six hospitals, nine health clinics and the territory’s main Covid-19 testing and vaccination site, according to the UN’s humanitarian agency. In marking the ceasefire deal on Thursday night, US President Joe Biden said Washington would assist in reconstruction efforts in coordination with international bodies, though did not specify exactly what aid would be provided.