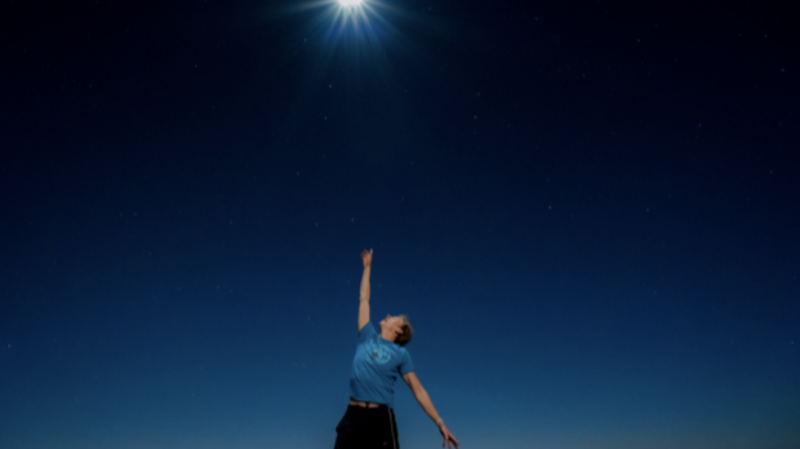 For my ninth birthday, my brother got me a telescope. In rural Northern Wisconsin, on my family’s farm, I would look at the stars across the night sky with no light pollution to block the waves of patterns webbing across the dark. Michael, my older brother, patiently set up my telescope and showed me the constellations and told me their ancient names; we would also wonder about possible other worlds and UFOs.

The first time I could find the constellations on my own, I was lit up and forever transfixed by stars. My brother explained the history, “This is the Ursa major and Ursa minor, the bears, the protectors.” I looked up at him, strong and tall, Michael, like the bear constellation, was my constant protector until his death took him somewhere beyond the stars.

Recently, international media began reporting more and more stories about Unidentified Flying Object (UFO) sightings, following the release of American government information relating to secret projects on the subject. For a long while, UFOs weren’t taken seriously by mainstream media, they featured them only as clickbait for ‘cranks’ on the internet. But now, as more and more credible people have come forward with their experiences, a shift has occurred in public perception.

There was a movement for the American government to release under the Freedom of Information Act documentation relating to projects involving UFOs. Former Navy pilots and civilians have since come forward for interviews about what they witnessed in the skies and the way the military chose to conceal sightings of the advanced technology demonstrated by UFOs. Yet, for all the supposed transparency there was a message of fear creeping into the narrative.

As the American empire always seeks to justify its bloated weapons spending to the tune of trillions of dollars, the sudden release of these CIA documents seems at best suspect and at worst diabolical with a view to blaming the presence of this unrecognized technology on Russia or China. Unfortunately, instead of seeing the opportunity to expand awareness for humanity the framing of the new information became one with a thread of distrust and war.

In the words of filmmaker and actor Reuben Langdon, the corporate media gives us

He added: “The people doing the work (researching UFOs) seem to have the best of intentions. It comes down to the media and forcing their hand. We have a media that is so focused on the negative news with very few positives. A lot of the researchers in the field have trouble to even bring forth the information. Like, Chris Mellon who said, first we have to have the conversation and unfortunately many will not listen unless it has that negative spin.”

Reuben began his career as a stuntman and has featured in Hollywood blockbusters including Avatar and Pirates of the Caribbean, as well as numerous video games, and became interested in UFOs following an experience he had while filming the James Cameron sci-fi epic. For over a decade he has been researching extraterrestrial phenomena amongst other things and entered a successful documentary making career.

Is the CIA controlling the messaging around this using the media to justify some other agenda? As we hear more stories about the phenomenon, the American government defaults their messaging to fear.

Several years ago, Reuben was involved in a citizen congressional hearing including former members of Congress discussing the history of UFOs and the coverup by the American government. Several high-ranking military intelligence figures shared information at this mock hearing to show what a real investigative Congressional hearing could be like if it were ever allowed. The hope was that it would raise enough awareness to force a public inquiry.

One of the highlights was watching the late Senator Mike Gravel demand that information that was hidden from the public by the US intelligence about UFOs and the history be released for everyone. As I discussed this project with Reuben Langdon, he described what it was like to coordinate the emulated hearing, quite unique in its approach.

He added: “I disagree with projecting fear with the UFO stories. It is an approach to get it in the media but not my approach to this phenomena. The national (American) media seems to be about selling fear and scaring as many people as possible because… fear sells.…”

One of the biggest challenges regarding the UFO coverage is getting it to be taken in a serious way at all. Reuben described the challenge of bringing forth information.

“I think that the Government may see this as an opportunity to put forth their agenda which is one of control of power…taking a bird’s eye, how it is approached by media… be prepared for false flags in the media, like an alien invasion.… We can choose to support people with a fear based narrative or support people with a non-fear based narrative. There is no reason to be in fear, if you are aware of it.”

Reuben had also made a documentary exploring alternative energy sources and the inventors who created them. The documentary was ultimately rejected by top executives for distribution. Undaunted, Reuben outlined how with his own equipment he embarked on the journey of two seasons of his show, Interviews with Extra Dimensionals, which ended up being a top show on the network GAIA. Reuben’s tenacity is driven by a curiosity based on his own personal experiences.

He said:“To some it may seem like the end of the world when in actuality it is humanity waking up to our true potential. The realization we are sovereign, independent beings that can create our own reality and not rely on others to do it for us.”

Reuben’s new project is a film about the adventurer F.A. Mitchell Hedges (the man Indiana Jones character was based on) and the crystal skull. It was discovered in the 1920’s at a Mayan temple, by his daughter. Reuben explores the mystique surrounding the object and its larger meaning to those who believe it has spiritual powers.

He added: “There seems to be an interaction between sacred spots and different places on the Earth, that indigenous hold in sacredness. The feature is setting up Hedges’ research and work. The film will also uncover the legend about the possibilities that there are 13 skulls around the Earth and if all found the legend says, humanity will enter a new era.”

The Crystal Skull is thought by some to be similar to an ancient computer that holds some sort of sacred knowledge like the Akashic records and other information available from ancient civilizations. People show up from all over the world to simply sit in the presence of the Crystal Skull to experience its power and report mystical attunement with multi-dimensional realms.

I imagine my brother Michael’s delight at watching the unfolding of all this new information. Near the end of my brother’s life, Michael gestured vaguely one night at the sky, took my hand in his and looked at me intently. Too weak to form all the words, I looked into his eyes and he turned his head upward to the night sky. I nodded and understood. “Look for me in the stars, I am with you.” I imagined him saying, “I will always be here to protect you. I love you.” Tears rolled down his face slowly as I kissed his hand.

Michael instilled in me the gift of wonder for discovering more about the Universe. I remain open and curious. Even now, I look up at night as I still search the same familiar constellations, I look for my protector, my brother, his smile now hidden somewhere behind the stars.

I am encircled with the thought of all the possibilities.

As Reuben Langdon suggests, “Instead of fear, why not be curious?”