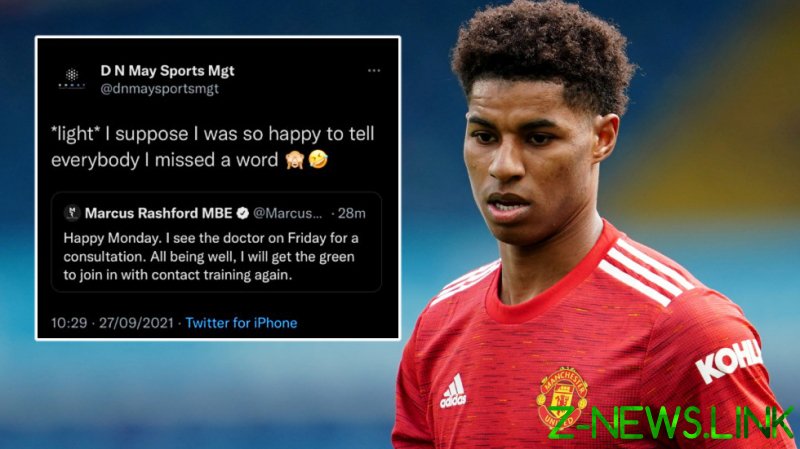 Manchester United and England forward Rashford prides himself on his passion, authenticity and nice-guy brand on the platform, famously using it to urge the UK government to spend millions on providing free school meals and offering fans personal thanks for their support on issues close to his heart.

While many among the earnest 23-year-old’s following of well over five million lap up his posts, others have been accused of cynicism for suggesting that Rashford may outsource some of the tweets.

Those eagle-eyed readers have frequently claimed to have spotted tell-tale signs within tweets, including one example when his account failed to spell ‘Paralympics’ correctly this summer.

Now a tweet identical to one post by Rashford, speaking about his return to United training and missing out the word ‘light’, has aroused further suspicions.

“I suppose I was so happy to tell everybody [about my comeback from injury that] I missed a word,” reads the corrective tweet, which was purportedly spotted being posted – perhaps accidentally – by an account under the name ‘D N May Sports Mgt’.

That group is listed as a company based in Manchester with Rashford and other players among its roster.

“Happy Monday,” the original tweet read. “I see the doctor on Friday for a consultation. All being well, I will get the green to join in with contract training again.”

Thousands of fans, ranging from the angered to the amused and disbelieving, swiftly picked up on the potential faux pas.

“If you’re going to be this super-friendly guy on social media, at least do it yourself,” replied one United fan, while another pleaded: “Can footballers please run their accounts? This PR nonsense is so cringe.”

Others were more blithely forgiving. “We don’t care,” assured one. “We’re just happy to see you and want you back, my king.”

The tweet materialized in the aftermath of United playmaker Bruno Fernandes bizarrely producing a social media post resembling an essay.

Portugal maestro Fernandes went into great length to address the relatively harmless penalty he missed in United’s shock defeat at home to Aston Villa in the Premier League on Saturday, leaving readers wondering whether he had really taken the time to personally write an eloquent and needlessly elaborate version of his views.

When he was asked on Monday whether players should be publicly apologizing for missing penalties in such a way, United legend and top UK TV pundit Gary Neville said an “apology culture” exists and seethed: “It’s embarrassing.

“They need to sack their PR people, speak with some authenticity and get on with it.

“I’m going to go big on this in the next few weeks. They’ve all got these comms managers that are creating personalities that don’t exist.”