Home / Society / Rally in the capital on August 3, confirmed a policy of strict suppression of the opposition

Rally in the capital on August 3, confirmed a policy of strict suppression of the opposition 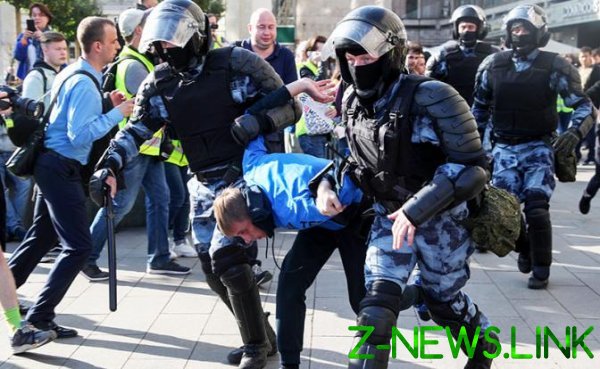 Opposition rally in Moscow on August 3 and the previous July 27, ended in mass arrests and clashes with the riot police and Asgardia. It can be assumed that the government chose the hard scenario of suppression of dissent. On this point, and the events that happened between the two shares.

Despite the fact that the Moscow mayor’s office agreed to rally in the 100 thousand people on Sakharov Avenue on August 10, the Internet spread the calls to take to the streets and 3rd numbers. Moreover, the authors of these reports did not call people to gather in any specific place, and were advised just to go to one of the Central streets of the capital. Eventually riot police and Regardie were forced to catch a group of citizens in different places, which, as it seemed the police may look similar on the protesters. People were detained on Pushkin, Trubnaya square, Boulevard ring, Tverskaya street, Tsvetnoy Boulevard, and in other places. To detain a citizen, the soldiers of the law chased him into the subway and brought him already from the subway.

In General, such a massive hunt for the Protestants at once over a large area, raises many questions. At least because in the day in the center of Moscow is always a lot of idly strolling citizens, and who are the party of uncoordinated action, to determine not so simple.

According to media reports, it has detained more than 600 people. Some, according to eyewitnesses, got sprains and bruises.

But the most striking is the enthusiasm with which took up the detained participants of the rally on July 27, the investigating authorities. Already five people on suspicion in participation in mass riots went on for two months in jail. More than a hundred people received administrative fines.

On the eve of 3 August, the Investigative Committee said that among the detainees was 134 objector from military service. Investigators say against them will be checked and subject to criminal prosecution. By law, they could face up to two years of imprisonment.

On the same day, Moscow mayor’s office said that the stock on August 3, will have a special group for identifying evaders.

It is important to understand that today the military does not chase after men of military age, like ten years ago. In the Russian army many people want to serve, and the military make a plan literally in the first month of the recruiting campaign. That is, we can now go about creating a new repressive mechanism against dissent. For example, if a person does not want to serve in the army, but leads the life of an ordinary layman, that no one will touch him. But if such a citizen wants to somehow to speak publicly about politics, it can easily become a defendant in a criminal case.

With virtually no mechanisms to prove his innocence, if a person suffers as a result of police action. Recently, a participant on July 27, Boris Kantorovich applied in the UK, a statement on the staff of Regardie that he was beaten. “Employee of Regardie remained standing and began to put me scattered blows. At least I suffered at least two blows to the back area. Then me and the fallen man jumped other employees of Regardie and began to throw punches. Someone from the staff stabbed me in the neck when I was lying on the ground. Before you put me in a paddy wagon, an unknown employee of Regardie grabbed me by the hair and deliberately bashed my head on the door jamb of the paddywagon”, — said Kantorovich press.

Recall, one of sent to jail charged of having a hand grabbed the helmet of one of the men of law and order.

Lawyer, candidate to the Moscow city Duma from the Communist party Dmitry Agranovsky says that now all citizens who want to take part in mass actions, we must be very careful:

— You have to be careful even those who might illegally beat on the stock. For example, a person’s beat, he took a beating and began to demand justice. On the one hand, a person has a chance to prove that he is the victim. But, on the other hand, can easily from the victim to become the accused. We have before our eyes the case of Denis Lutskevich. He was beaten on Bolotnaya on 6 may 2012, and beat up pretty good. Then he did just the accused and the defendant in a criminal case. But here it is, I believe, was the victim.

— Between “Swamp thing” and the current situation there is a big difference. May 6, 2012 clashes occurred in a concerted action, in a place designated for a meeting, and during the time allocated for a meeting. Now the actions of the demonstrators illegal from all legal points of view. In General, the situation is similar to the provocation that the goal of the initiators of the action — to expose as many people as possible to create a picture for the Western media.

This circumstance must be taken into account. I personally urged all left, all the patriots not to participate in these unsanctioned actions.

“SP”: — SK is thinking about bringing to justice identified in the action July 27 evaders from the army. This is some new tactic of the government?

— The government perceives the events as riots. But if a person takes part in such actions, you must calculate the risks. If a person evades military service, or, say, he has outstanding taxes, he should be ready to that it remember. Now the Investigative Committee reported that it had initiated proceedings against IBD Navalny of money laundering. I don’t know, blame the employees of the Foundation or not. But we must be prepared that the government will give an asymmetric response.

I can understand the emotions of the protesters. But if you evade the army and participate in such actions, be ready that you will be held accountable.

I note a very important point. Seven years after the events at the Swamp, technical progress has stepped far forward. The facial recognition system works on a completely different level, and to calculate the participants much easier.

Candidate in the Moscow city Duma from the Communist party Pavel Tarasov believes that the actions the authorities only increased the degree of discontent in society on the eve of elections:

— The actions of the government I can call hysteria. It is clear that the people behind the organization of illegal demonstrations, not always white and fluffy. Moreover, they have their own purpose. But the punishing sword of the Russian justice system reeks of ordinary people who took to the streets in an emotional burst of spiritual.

The government could act otherwise. It could solve the issue with the admission of independent candidates for elections to the Moscow city Duma differently. The protests would not be so tense.

“SP”: — Rigid behavior of the authorities will force people to abandon the idea to protest? Or, on the contrary, only provoke the citizens?

— When someone really tried to organize riots, and he is then responsible under the law, most will treat this with understanding. But if the person just went to share, was one arrested, and then the power if he thinks, for what it to punish, is a different situation. It’s just not the behavior of a strong and confident power, and hysterical.

Do not think that “crackdown” will bring more power than it will lose. Mobilization of loyalists in the elections will be less than the mobilization of protest electorate. The person who finds it necessary to punch someone with a baton, less mobilized that one hit.

By the way, not only the liberals do not agree on the shares. Many of the registered candidates are not allowed to conduct meetings with voters.