Home / sports / Rakitskiy with “Zenith” became the champion of Russia

Rakitskiy with “Zenith” became the champion of Russia 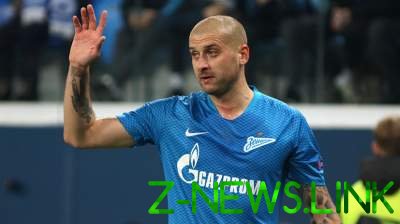 Zenit in Matchday 27 away could not beat “Ahmad” (1:1), but the closest rival pitertsev capital “locomotive” on departure has conceded to Tula “Arsenal” (0:2) and lost the chance for gold.

Rakitskiy after the winter transfer from Shakhtar for € 10 million in the championship of Russia has played 10 matches and scored 3 goals. Ukrainian defender in matches with the “Orenburg”, “Locomotive” and “Krasnodar” was notable for the spectacular kicks.

The championship with “Zenith” became for Rakitskiy eighth in his career. With “Shakhtar” Yaroslav the seven times he took the gold medals of the championship of Ukraine.

Rakitskiy joined the long list of Ukrainian football players, who managed to win the championship of Russia. “Zenith” did Anatoliy Tymoshchuk and Alexander Gorshkov, with Lokomotiv the gold was taken by Taras Mykhalyk, with “Rubin” won Serhiy Rebrov, Spartak Champions of Russia became Maxim Kalinichenko, Maxim Levitsky and Dmitry Parfenov, and Bohdan Shershun won the local Premier League with CSKA.

Yaroslav Rakitskiy after transition in “Zenith” for political reasons ceased to be called to the national team of Ukraine. Head coach of “blue-yellow” Andriy Shevchenko gave to understand that the issue with the involvement Rakitskiy to the team is closed and more will not rise.