Railroad rescued a driver stuck between the barriers. Video 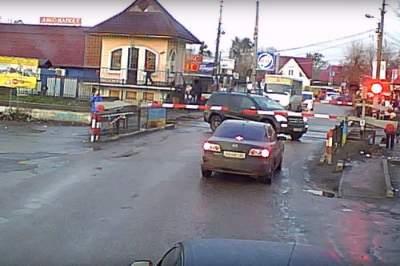 Railroad hurry rescued the driver, who was stuck between gates at a crossing in Boyarka (Kiev region), from a collision with a train.

Judging by the video, which was posted late last week, the incident occurred on the morning of 29 December, on Shevchenko street. The owner of a foreign car has not stopped on forbidding signal of the traffic light hoping to get moving, but in the end was sandwiched between the barriers. The driver tried to maneuver, but to move out of the way had not happened.

To help the motorist came to a railroad — man hands have raised the barrier, thus freeing the way to the car. The owner of the Mercedes managed to get away, and just a couple of seconds passing train.