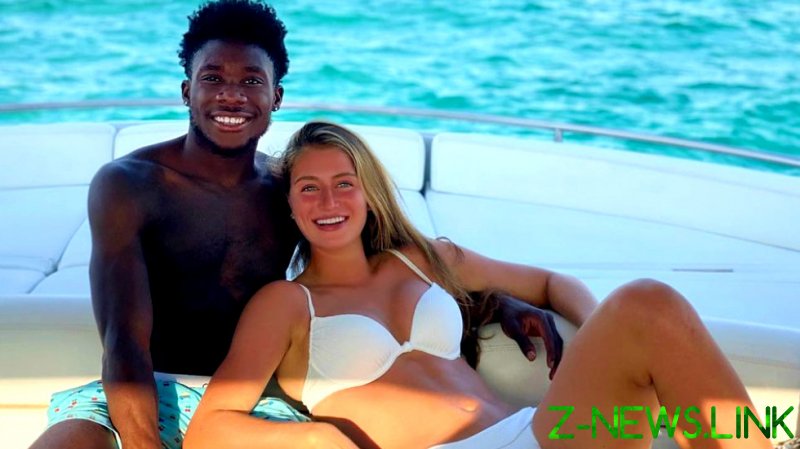 The photogenic pair were bombarded with racist comments under a shot they had shared of themselves posing on a boat in Ibiza, which 19-year-old Huitema affectionately described as a “baecation”.

Almost four months after the picture had first been posted, a targeted campaign of poisonous comments appeared based around the colour of Davies’s skin, variously calling the defender a “monkey”, an “animal” and trumpeting archaic slurs about his ancestry and suitability as a partner and potential father.

Davies has supported the Black Lives Matter campaign this year, joining his Bayern teammates to wear an armband in support of social justice following the killing of George Floyd at the hands of police brutality in the US in May.

Speaking a month later, he told Sky Sports: “It hurts a lot, seeing all these photos of cops killing black males.

“I don’t know what to say, it’s just a very sensitive topic to talk about right now. All I want to say is that my skin color is not a crime.”

Huitema used her Instagram account to take part in the Blackout Tuesday initiative, in which people around the world posted a black square as a symbol against racism.

She has been dating Davies since around the same time as they were both named Canada Under-17s players of the year in 2017, and the couple are known for their playfully intimate posts to their combined Instagram following of more than 4.2 million.

Shocked readers said the obscenities were further evidence of the work needed to eradicate racism from sport. “It’s crazy, the type of stuff people say and get away with,” rued one.

Another added: “I’m so sorry to read this. It’s so hurtful but racism exists and these sick people need to be charged.”

Bayern defender Jerome Boateng said he had been “totally disgusted” by the comments.

“No words for that except that you should never listen to people full of hate posting cowardly on social media,” the Germany veteran told his Twitter following of more than 2.5 million.

“We don’t give them a chance. Love is stronger than hate!”

Racism in football has been in the headlines again this week after Istanbul Basaksehir players walked off in a Champions League match at PSG over alleged discriminatory comments by a match official.

A row also broke out over the taking of the knee before matches in England and the decision of a section of fans at one match to boo the gesture, leading to the team linking arms in the match that followed and holding up a banner.

Huitema, who had portrayed herself taking a brief break with Davies less than a week after he lifted the Champions League trophy with the Bundesliga giants, did not immediately respond to or disable comments on the post.

“Ignore the toxicity,” one of the fans who had added almost half a million likes to the post urged her.

Another said: “F*ck them haters – they can’t handle all this speed.”