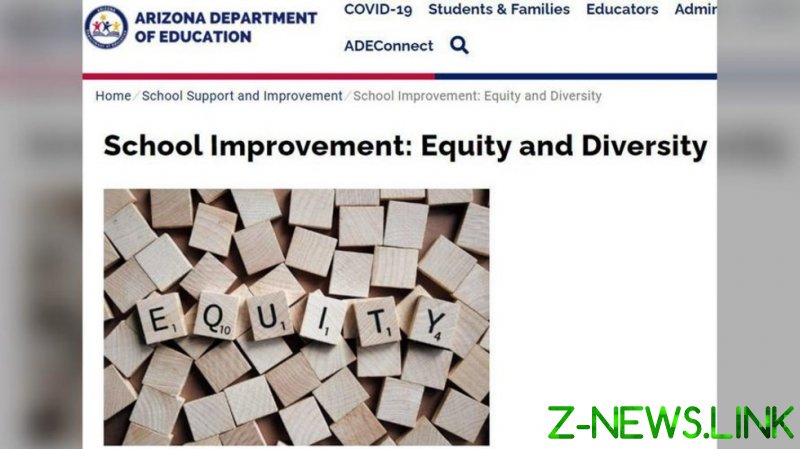 An “equity and diversity” toolkit for teachers, parents and administrators posted by the Arizona Department of Education fully embraces the belief in “persistent racial biases in our society,” going so far as to demand of parents to instill “antiracist attitudes and actions” from birth so their children don’t “absorb bias” from the world.

Researcher Chris Rufo posted a series of screenshots of the materials from the toolkit on Tuesday. He points out that some of the materials claim that babies show the first signs of racism at three months old, or that white children “remain strongly biased in favor of whiteness” by age five.

The Department of Education site said the schools “cannot expect each and every Black, Latinx, Native and Indigenous, and marginalized Asian child” to reach their full potential if they aren’t properly supported.

Meanwhile, some of the reading it recommended argued that “all white people are white in the context of a society that continues to disadvantage people of color based on race” and that schools should promote an “antiracist white identity” instead.

To define “systemic racism,” the toolkit uses YouTube videos from Act.tv, which describes itself as “a progressive media company specializing in next generation live streaming and digital strategy.”

Among the recommended authors are Kimberle Crenshaw, who invented the concept of “intersectionality,” and Black Lives Matter Movement co-founder Patrisse Khan Cullors, who at one point described herself as “a trained Marxist.” Viewing recommendations feature the controversial Netflix show ‘Dear White People,’ among others.

This is not the first school “equity” program to be highlighted by the Seattle-based researcher, who has been waging something of a crusade in recent months against the Critical Race Theory-based social justice agenda. Last week, he pointed out a similar curriculum in Buffalo, New York public schools – and even got fact-checkers who sought to dismiss his complaints to admit the error of their ways.

Last year, Rufo caught the attention of the Trump administration by highlighting the contents of sensitivity training seminars provided to US government agencies by various diversity consultants, leading to the September 2020 executive order banning“race or sex stereotyping or scapegoating” in the US government or the military.

The Biden administration revoked that order immediately upon taking office, and made ‘equity’ – equality of outcomes, which requires discrimination against some groups and in favor of others – a cornerstone of its foreign and domestic policies.