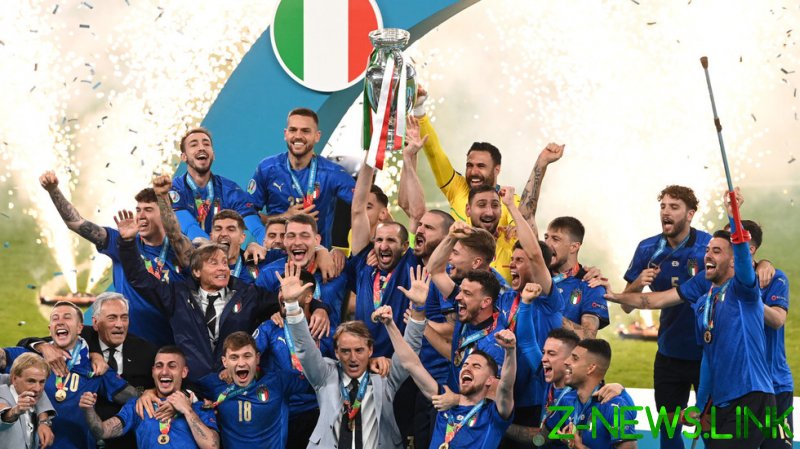 Italy beat England 3-2 in a nail-biting penalty shootout on Sunday night, winning the UEFA European Championships for the first time since 1968. However, while Italians erupted in celebration, some dismayed England fans turned their anger on their team’s three black players who missed their penalty kicks.

Much has been written about the shameful racist abuse hurled at these players, but the day after the final, even as Italians were being physically attacked on British streets, The Economist managed to find a more obscure source of racism: the Italian team itself.

“The most striking aspect of Italy’s 26-man squad before it took to the pitch was that, alone among the main contenders, it did not include a single player considered as being of color,” the article read, noting: “Although three were born in Brazil, they are of Italian descent.”

Anyway, the end result is that Italians play on the Italian team. But they’re not just any Italians, The Economist continued, they’re bad Italians who were “ambivalent” about taking a knee before their games – a bizarre gesture imported from the US in the wake of the ethno-narcissistic Black Lives Matter movement.

Not only that, by winning the championship, the Italian team made right-wing politicians in Italy happy, which of course is a crime.

The article was slated online. “Would the Economist ever write a story that African teams in the World Cup didn’t have white players or the Asian teams didn’t have black players?” American conservative Ryan Girdusky tweeted.

Demographic debates aside, “the most striking aspect” of the Economist’s article is its American-style definition of “people of colour.” Emerson Palmieri, one of the team’s Brazilian-born players, is noticeably darker than most of his teammates, yet for the purposes of the article, he’s considered white. Much like in the United States, “person of colour” is understood as a stand-in term for “black,” with other races and colors added to or excluded from this category depending on the political point that needs to be made. Asian-Americans in particular are the subject of this racial switcheroo: they’re people of color when they’re being attacked in the street (not by whites, mind), and they’ve “internalized whiteness” when they succeed in work and education.

The classification is meaningless and arbitrary, and serves only so the Economist can score anti-racist good boy points. Amid the hubbub, it’s easy to forget that had Giorgio Chiellini, captain of the Italian team, turned up at Ellis Island in the late 1800s, he wouldn’t have even been considered white. Even in Italy, northerners for centuries considered their southern countrymen black, and a school in Britain drew accusations of racism back in 2016 when it asked the parents of an Italian student whether their child was “Italian,” “Italian-Neapolitan,” or “Italian-Sicilian.”

Racial identity is a complex matter, and as a British publication, the Economist shouldn’t reflexively stoop to the zero-sum, ‘whites vs. people of colour’ narrative leaking like sewage from the US in recent years. Even more radically, the magazine should recognize and applaud the fact that Italy won the Euros by playing beautiful football, not by virtue of the team’s imaginary racial superpowers.