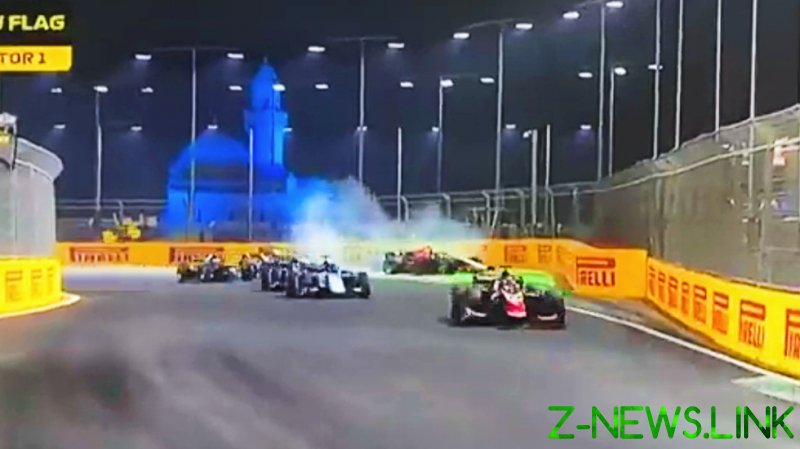 French driver Theo Pourchaire, 18, was left stranded in a terrifying position in the middle of the track when his ART car stalled on the grid.

Enzo Fittipaldi, who is part of racing royalty as the grandson of Emerson Fittipaldi, a Brazilian two-time F1 champion during the 1970s, proved to be the unfortunate driver unable to keep out of the way of Pourchaire’s marooned motor.

“The drivers were immediately attended to by emergency and medical crews,” Formula 2 said in a statement after the incident at the start of the race in Jeddah that caused the event to be red-flagged.

“The drivers were conscious and extricated by the attending medical crews. Both have been transferred by ambulance and helicopter to King Fahad Armed Forces Hospital, Jeddah.”

The smash reportedly took place at a significantly higher velocity than the shuddering collision between Formula One arch-rivals Max Verstappen and Lewis Hamilton at the British Grand Prix in July.

Alfa Romeo F1 boss Frederic Vasseur is said to have told an AFP journalist that Pourchaire “is fine” and has “no fracture”.

“For the moment, I don’t know if it’s already the end of the season for me,” French prodigy Pourchaire said on social media around five hours after the accident.

“But the most important is not that: that was a really big one and Enzo is injured.

“I wish him the best recovery possible. You guys can send him kind messages. He needs that.”

Fittipaldi’s team, Charouz Racing System, surprisingly appeared to suggest that the 20-year-old could be back in the driving seat next weekend.

“One hectic weekend in Jeddah is finished,” they said, describing the crash as “not the outcome of the feature race anyone could have imagined.” “Now let’s wish [the pair] to be healthy and strong for next weekend.

“We all [had] a pretty big fear for Enzo after a nasty collision during the start of the race.

“The feature race in Jeddah was marked by many crashes including another collision for [Fittipaldi] – a truly unfortunate weekend.”

In his debut Formula Two season, Fittipaldi scored his first points on Saturday in Race 2.

Pourchaire was just 16 when he first featured in Formula Three, becoming the competition’s youngest double race-winner.