Home / business / Question of the day: whether Putin agreed on the withdrawal of 500 billion rubles from steel?

Question of the day: whether Putin agreed on the withdrawal of 500 billion rubles from steel? 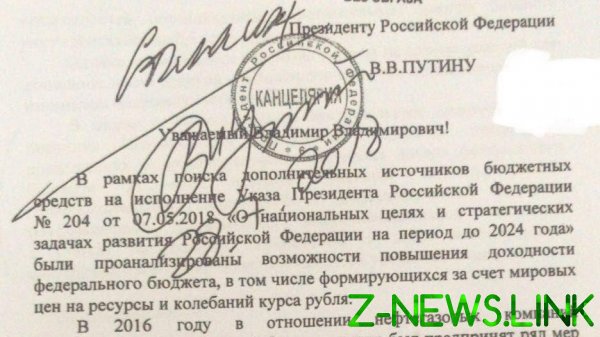 Russian President Vladimir Putin agreed to the proposal to withdraw the “excess profits” from the steel and chemical companies, but no final decision, said the press Secretary of the head of state, Dmitry Peskov.

“The letter really was, it was marked “for official use only” were indeed made expert point of view. And indeed it is the resolution of the President “Agree” in this regard, all messages are absolutely true,— said the press-Secretary of the journalists.— The President agreed that this topic will be elaborated by the government of the Russian Federation and are to submit proposals with regard to maintaining the investment opportunities these companies.”

“In world practice, the withdrawal of the windfall profits generated by the market and independent of the actions of the management of companies applies not only to the oil and gas industry but to other resource industries,” – said in the text of the copy of the letter, which is presumably the signature of Putin and resolution “Agree” on July 28.

See also:  It became known who will be affected by the Amnesty law

Recall that the shares of the largest Russian metallurgical and chemical companies fell after adviser to Vladimir Putin has proposed to withdraw from them “windfall”. A letter with this offer and visa, President of the “I agree” hit the media.

In the letter there is a table, from which it follows that in 2017 the amount of the total exemptions could be close to 514 billion rubles.

Speech in the letter was about $ 514 billion. This money was planned to be spent on implementation of the new “may” decree of the President of Russia.

See also:  Ukrainians told me how to choose a good family doctor

In the text of the copy of the letter Belousov proposes to withdraw the income of Evraz, NLMK, Norilsk Nickel, Severstal, MMK, metalloinvest, SUEK, Mechel, ALROSA, Pole, SIBUR, PhosAgro, Uralkali and Acron.

According to TASS, on Friday, August 10, the Ministry of industry and trade should discuss the withdrawal initiative 513,7 billion metallurgists and chemists at a meeting with the companies.

Putin is not planning to participate in this meeting.