Home / WORLD / ‘QAnon Shaman’ denied request for prison release to see ailing grandfather, who has since died, as judge deems him ‘flight risk’

‘QAnon Shaman’ denied request for prison release to see ailing grandfather, who has since died, as judge deems him ‘flight risk’ 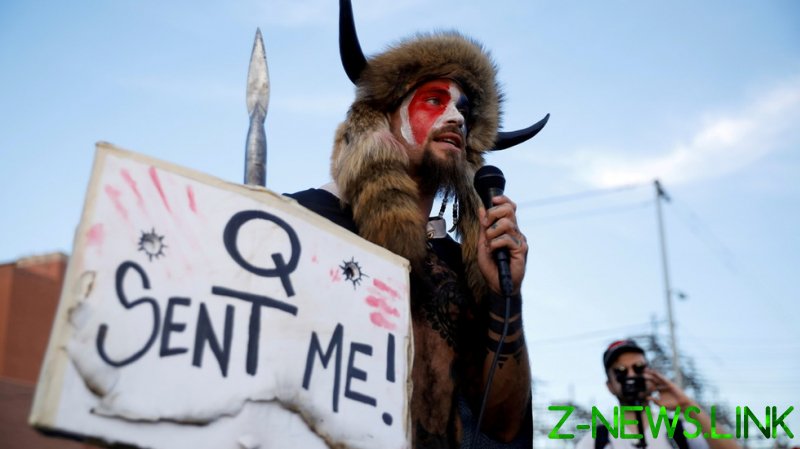 While Chansley, 34, filed a motion in July for temporary release to see his sick granddad before he passed, he was denied that opportunity by Judge Royce Lamberth, who ruled on Thursday that the accused “failed to present clear and convincing evidence that he is not a flight risk.”

According to his attorney, Albert Watkins, Chansley sought to be “released after seven months of solitary confinement to see his ailing maternal grandfather” – who the lawyer described as “the only adult male constant in Mr. Chansley’s life” – for “one last time before he died.”

However, Chansley’s grandfather passed away on Thursday, the same day the judge ruled against his request for temporary release, Watkins said in a statement on Friday.

“With great sadness and regret, there was simply nothing more I could do to permit a gentle, smart and kind young man the opportunity to spend a few minutes at the side of the man who raised him to say ‘good-bye’ one last time,” Watkins said, slamming the US criminal justice system for failing to “appropriately handle those in our nation with mental health disabilities and vulnerabilities.”

The motion filed earlier this summer was Chansley’s third request for release, after he was denied pre-trial release on two other occasions, with the court also citing concerns he would flee. Having now pleaded guilty to one felony count, the standards for pre-sentencing release are even more stringent, the federal judge noted in his nine-page order denying Chansley’s latest request.

Lamberth also referred to Chansley’s mental health in the order, saying that the defendant himself had acknowledged his grandfather’s illness was a “triggering event” for him. The judge also cited previous comments from Chansley’s defense that he should avoid “psychological ‘triggers’” for the sake of his “continued mental competency.”

During his lengthy pre-trial detention – much of which was spent in solitary confinement – Chansley was diagnosed with a number of serious mental illnesses, including transient schizophrenia, bipolar disorder, depression and anxiety.

Chansley is arguably the most recognizable of the some 600 people charged in relation to the riot at the US Capitol, seen in countless photos sporting a horned fur headdress along with face paint and a bare chest covered in tattoos. Before January 6, he took part in a number of protests in the Phoenix, Arizona area and became known for his eccentric gear and support for the ‘QAnon’ conspiracy community, frequently seen hoisting a sign reading “Q sent me!”

Initially charged with six counts for his role in the Capitol riot, Chansley has pleaded guilty only to the felony obstruction charge, while prosecutors have since dropped the other five.