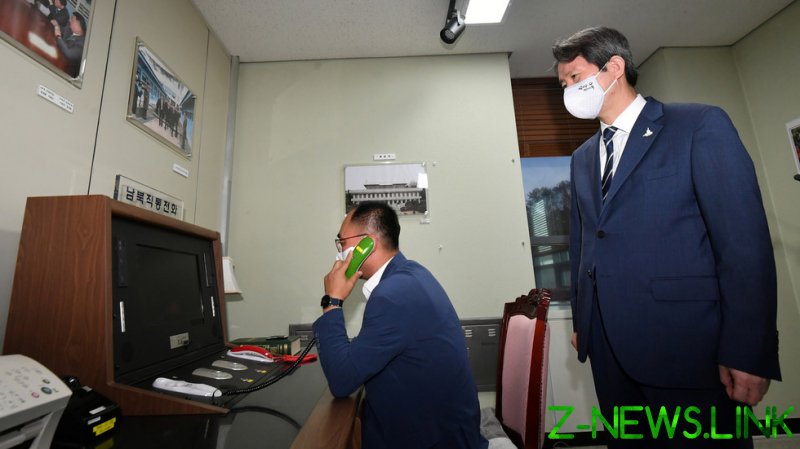 “The South Korean authorities should make positive efforts to put the North-South ties on a right track and settle the important tasks which must be prioritized to open up the bright prospect in the future,” North Korean state media KCNA said on Monday.

South Korean authorities confirmed that the North had indeed answered their call on Monday morning, according to Yonhap, but offered no details of the discussion. It noted, however, that Seoul also expressed hope it could become the first step towards an early resumption of inter-Korean peace talks.

North Korean leader Kim Jong-un hinted at restoring the hotline last week, when he spoke at the Supreme People’s Assembly about a “durable peace settling in the Korean Peninsula.” While accusing the US of destroying the stability and balance of the peninsula through excessive military presence and activities, Kim tried to reassure Seoul that Pyongyang has “neither aim nor reason” to provoke its southerly neighbor.

North Korea stopped answering calls from Seoul on August 10, just two weeks after restoring communication after a year-long break. The move was in protest over joint South Korea-US military drills being held, with Kim Yo-jong, the sister of the North Korean leader, accusing Seoul of engaging in “perfidious behavior.”

Over the course of September, North Korea conducted a long series of missile tests, which included a long-range cruise missile, a newly developed rail-borne munition and a new air defense system – and culminated with an alleged test of a “hypersonic” glider vehicle just the country’s envoy took the stage to address the United Nations with a fiery speech.