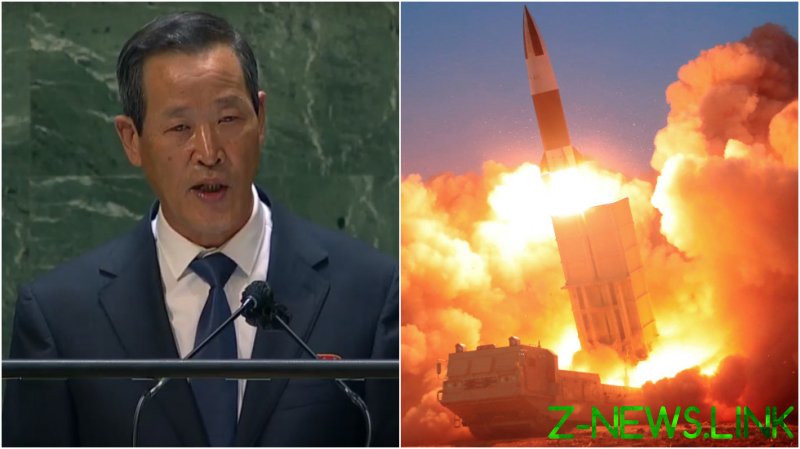 The Japanese government announced a “possible ballistic missile” launch from North Korea on Tuesday, according to sources cited by Kyodo News and NHK, while South Korea’s Yonhap News noted that Pyongyang fired at least one “unidentified” projectile into the East Sea, citing the South Korean Joint Chiefs of Staff, though provided few other details on the purported launch.

Reports of the apparent test fire made the rounds just as North Korea’s UN ambassador, Kim Song, delivered a speech before the General Assembly in New York City, where he repeatedly condemned what he called a “hostile policy” toward Pyongyang from the United States and allied nations, including the stationing of thousands of American troops in the south.

“The US’ hostile policy against the DPRK finds its clearest expression in its military threats against us,” he said, using the acronym for the formal name of his country, the Democratic People’s Republic of Korea.

While Kim noted that North Korea has never conducted a single military exercise near US territory, Washington has regularly staged “military demonstrations of intimidating nature” on the Korean peninsula and in Korean waters in conjunction with the government in Seoul over the last several decades.

The envoy also stated that while many fellow UN member states believe the antagonism with the United States stems solely from North Korea’s possession of nuclear weapons, he argued that is not the case, as the hostile policies began long before it developed its home-grown nuclear arsenal.

“From the very first day of the foundation of the DPRK, the US has not recognized our sovereignty, treating us as an enemy state and openly showing its hostility toward the socialist system chosen by our people,” Kim said.

If confirmed, the latest reported missile launch could mark Pyongyang’s sixth major weapons test conducted so far in 2021, according to Yonhap. Earlier this month, North Korean state media reported a successful launch of a new, rail-borne munition, which followed another series of tests in the weeks prior, one reportedly involving a newly developed long-range cruise missile. Such tests are routinely denounced by Washington, which itself regularly conducts large-scale war games with Seoul. In line with Kim’s comments before the UN, Pyongyang has repeatedly condemned the drills as provocative and inherently threatening, saying they effectively simulate an invasion of the north. Though former US President Donald Trump briefly negotiated a ‘freeze-for-freeze’ deal, agreeing to halt the drills in exchange for a pause on Pyongyang’s weapons tests, the pact quickly fell through, seeing the drills and tests resume.