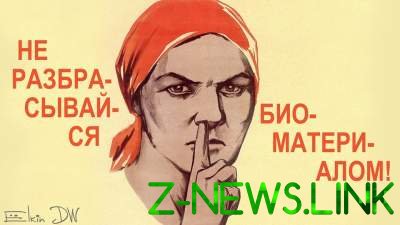 Famous Russian cartoonist has dedicated his new work to the President of Russia Vladimir Putin about “biomaterial”, which allegedly collected from the residents of the Russian Federation.

The caricature was published on the Facebook page of the edition of DW.

“Putin, yesterday made a very strange statement that the biomaterial of the Russians going all over the country. Version of Sergey Elkina on how to live with it now”, – stated in the message.

The cartoon depicted a famous Soviet propaganda poster “do Not talk” with a few changes.

Instead of a mouth the woman on the poster covers one of the nostrils, obviously, in order not to scatter “biomaterial,” as the inscription on the caricature.