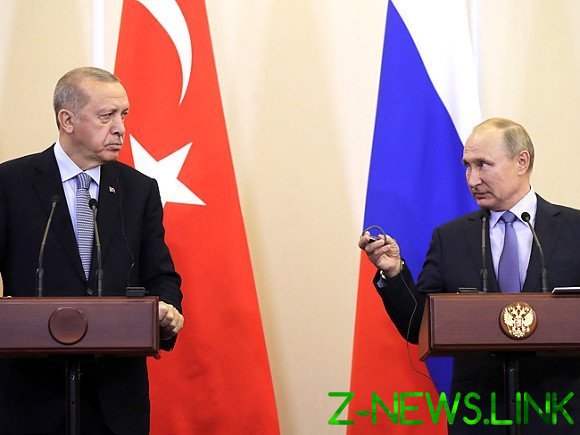 The escalation of the conflict in Syria is at a frightening speed. It can be stated that the new Russian-Turkish war de facto started.

Before analyzing recent events, let me remind you that at the very beginning of Russia’s entry into the Syrian war in 2015, I wrote about the fact that all regional and world powers, one way or another involved in this conflict, there are enough conflicting interests that clash between them is almost inevitable.

The first “call” in this sense Russia was performed on 24 November 2015, when the sky over the Turkish-Syrian border F-16 Turkish air force shot down a Russian su-24 bomber. After the angry philippics for this reason the Russian leaders and mass hysteria in the national media, Moscow imposed economic sanctions against Turkey. However, after some time the Kremlin decided to resume economic and political cooperation with Turkey having the second power after the United States army in NATO.

The second threat, but Moscow ignored the bell sounded for her on 7 February 2018 under Syrian city of Deir ez-Zor. There is an American aircraft during the three-hour contactless her battle defeated quite a serious convoy of armed men, as reported from the PMC “Wagner”, tried to grab local oil refinery on the territory of which at that time were the American special forces and their Kurdish allies. Then they destroyed almost all the equipment “vagnerova”, but the main thing — up to a few hundred mercenaries and their Syrian allies.

Meanwhile, relations between Russia and Turkey a year after the incident with the downed su-24 all indicators seem to have evolved incrementally. Moscow, after the formal apology, Erdogan has lifted all its sanctions against Ankara. Were built “Turkish stream” is extremely important (especially after the introduction of us sanctions against “Northern stream”) the Russian gas pipeline to Europe through Turkey. Moreover, Erdogan, despite the protests of the United States, threatened to put the Turks the American fifth generation fighter jets, purchased from Russia advanced anti-aircraft missile systems s-400.

Erdogan and Putin, as it seemed, it seems to be agreed on the division of “spheres of influence” in Syria. However, in 2017-2018, when Russian-Turkish relations, including personal relations between the two leaders, were at the peak, it was represented that the agreement was only an illusion. Too different, they were interpreted in Moscow and Ankara.

Now it becomes obvious that in Syria, the Russian push came on the Turkish stone. Both Putin and Erdogan are playing in their countries, the role of military leaders. But because each of them believes that it can give to another. Nevertheless, the Turkish President has gone on a number of compromises to his Russian counterpart in Syria, probably hoping for reciprocity. So he abandoned the idea of overthrowing a hostile Ankara regime of Bashar al-Assad’s closest and perhaps only ally of Moscow in the world.

Erdogan believed that in return Putin must go to meet him and to surrender the North of Syria. That is, allow him to create stripped from the Kurdish armed forces the buffer zone with a width of 30 kilometers and a length of almost 800 kilometres — almost the entire Turkish-Syrian border.

In addition, Ankara hoped to begin the return of nearly four million Syrian refugees living in Turkey under its control the Syrian territory.

A separate agreement of Turkey with Russia was reached in Idlib province and some adjacent areas. As you know, there is the agreement with Moscow had created a zone of de-escalation, which moved the opponents of Assad from different groups, but mainly those who are supported by Turkey. The ceasefire was constantly violated. Sides of the conflict blame each other. However, since the end of January 2020 de-escalation in Idlib and other parts of Northern Syria finally gave way to full-scale military escalation.

Assad’s troops began to strike not only in the Union of Turkish troops to the Syrian opposition, but the Turkish military posted here. At each blow the Turks responded in a much more powerful strike on Syrian government forces, warning that next time the response will be even stronger. However asaditov, seeking support from Moscow and Tehran, it didn’t stop.

In the month of February, every new attack on a Turkish position from Assad’s army was getting bigger. Retaliatory strikes by Turkish troops brought the Syrian government forces even greater losses.

27 Feb asadity, after a strong Erdogan’s statement that if by the end of February they will not return behind the line of the Turkish outposts in Idlib, the Turkish army is using all its capabilities in order to compel them to do so, Damascus forces “Syrian” aircraft struck a massive blow to Turkish troops in the province. As a result, according to the latest data, killed 33 Turkish soldiers were killed, dozens were injured.

Almost on the same day Russia sent to the coast of Syria grouping of military ships — two frigates — “Admiral Makarov” and “Admiral Grigorovich” with cruise missiles “Caliber” on Board, as well as a large landing ship black sea fleet “Orsk”. Turkey said it was ready to block the Straits, but in the end missed these ships through them.

Salient point: if Turkey makes demands and makes other public statements by the mouth of Erdogan and other officials, on behalf of the Damascus her usually answer… representatives of Russia.

So, the statement by Ankara on the latest attacks by the Syrian army, 28 February the representative of the Russian center for reconciliation of the parties to the Syrian conflict said that Syrian aircraft bombed the convoy in which the Turkish military, first, in General, was not to be, and secondly, the Turks, they say, were not informed that their military in this column was.

On this, the Minister of defence of Turkey Hulusi ACAR practically accused Russian officials of lying, saying that the Turkish side, first, warned the Russian military about the deployment of his soldiers, and second, the “Syrian” air that most places just beat, including for the military “ambulance”.

Another important detail showing where everything is moving. If earlier, after the personal contact between erdoğan and Putin came at least a temporary lull, today these contacts seem to serve to both more propaganda to cover, in order to demonstrate to the world their love of peace. In the face of a looming military confrontation, each of them in the eyes of the world wants to look is not a hawk but a dove.

How productive was the last phone conversation of the Turkish President with his Russian counterpart on February 28, during which, according to the Kremlin press service, was spoken only in platitudes about the concern over the escalation in Idlib, it became clear just a few hours. The Turkish army inflicted a massive blow for the forces of Assad for all time of its stay in Syria.

The result of this shock of the Turkish news Agency Anadolu, to refer to the words of the Minister of defence of Turkey Hulusi ACAR, was the destruction by heavy artillery and drones sentito-missiles to the Syrian army “Beech” and “Armor”, 23 tanks, the same field and self-propelled artillery pieces, and five helicopters.

Massive attacks of the Turkish army of Assad, the chief ally of Russia, emergency dispatch to the Syrian coast three Russian warships, including large landing ship (the latter says the likely increase participation already the ground forces of the Russian Federation in this conflict) — all the signs of an impending major war between Russia and Turkey.

However, there are other signs. It is the official face of the Turkish Republic, aide to Erdogan, member of the presidential Committee on security and foreign policy Mesut khaki, 28 February the live TV channel A Haber declared: “In the past we fought with Russia 16 times, we’ll do it again, our revenge will be terrible”. He also recalled that in Russia there are 25 million Muslims, and promised that “Russia will be dismembered from the inside.” Such Frank statements by the Turkish side still does not allow…

In turn, Vladimir Putin on the same day summoned the Russian security Council to discuss a dramatic escalation in Idlib. The assistant to the Russian President, Dmitry Peskov, diplomatically stated that Turkey failed to cope with the problem of control “over the activities of militants and prevent terrorist activity and to prevent aggression against the Russian military facilities”.

What is now so declare war?