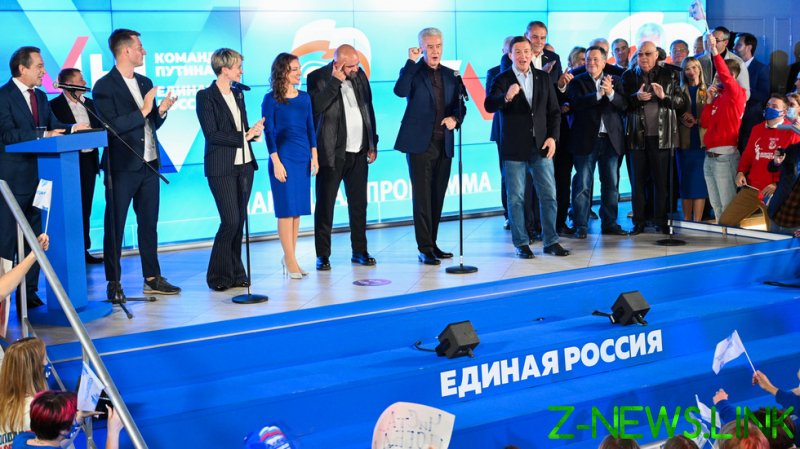 With 80% of the vote having been counted on Monday morning, Andrey Turchak, Secretary of the General Council of the United Russia party, said that his candidates were on track to win in races across the country.

“Of course, results are still coming in, but as of early this morning, United Russia is drawing more than 48% of the vote,” he said. According to Turchak, “this allows us to receive 120 seats” through the proportional representation system which allocates half of those available in the State Duma. “Our candidates are also winning in 195 constituencies,” he said, with ‘first-past-the-post’ results deciding the other half.

“With 300 seats,” Turchak went on, “a constitutional majority can be formed.” United Russia has enjoyed outright control of the country’s parliament since the last elections in 2016. This has allowed the party to pass fundamental reforms without relying on votes from other groupings.

Analysts had previously questioned whether the party of power would be able to achieve the same level of support at the ballot box, given polling had shown sharp increases in those intending to vote for other candidates.

However, with four in every five ballots having been counted, United Russia has won around 49.35% of the vote, while the nearest opposition grouping, the Communist Party (KPRF), has attracted 19.85%. If these results are maintained as the last ballots are counted, it would represent a drop of close to 5% in support for the party of government, and an almost 7% growth in that of the KPRF.

The right wing LDPR is currently in third place with 7.56% of the vote, and the center-left Fair Russia – For Truth is in fourth, winning 7.38%. Also expected to gain seats by surpassing the 5% threshold for proportional representation is New People, a recently-established pro-business party that has aimed to win support from young people.

An exit poll conducted by research agency INSOMAR estimated that while United Russia was the most popular party, the Communists were likely to have slashed its majority. Based on a total of 438,218 people across 1,455 polling stations, it estimated that the government has attracted 45% of the vote, and put the KPRF on 21%.

In the Far East region of Yakutia, which has been hit by massive wildfires in recent weeks, the KPRF has already declared victory in the race for a parliamentary seat, with all votes having been counted. Petr Ammosov, the party’s candidate, won outright with 21.6% of the vote, taking the seat from Fair Russia. The constituency is the largest in the world, and covers roughly the same area of land as India.

The results haven’t been without controversy, however. There have been widespread accusations of fraud and misconduct. Throughout the three days of voting, many videos shared online appeared to show voters and officials stuffing ballot boxes with multiple voting slips. In Moscow, some opposition figures accused officials of delaying the release of online voting results to give them an opportunity to manipulate the results.

The team of jailed opposition figure Alexey Navalny also accused the authorities of foul play, declaring all the victories against his candidates they supported, as part of a controversial “smart voting” scheme, as “falsification.”