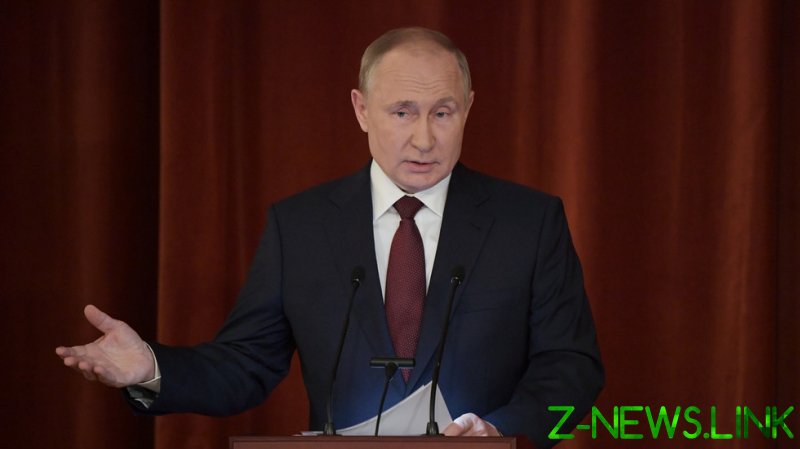 The worsening relations between Russia and the West were high on Putin’s agenda on Thursday. NATO troops have been active around Russian borders, including in the Black Sea region. The Russian president addressed what Moscow called “provocative actions.”

‘West is not a very reliable partner’

Touching on the Ukrainian crisis, Putin said France and Germany “are appeasing” Kiev’s attempts to “dismantle” the Minsk treaties, which were designed to bring the war in eastern Ukraine to an end. Recently released diplomatic cables also indicate that Paris and Berlin shot down a Russian peace plan for Donbass. According to the president, it’s not easy to reach “serious  agreements” with the West in general.

‘We don’t need any conflicts on our borders’

While Moscow’s “recent warnings have had a certain effect,” the tensions are rising on the country’s borders nonetheless, Putin said, stressing that it must be a top priority to not allow anyone “to stage some kind of conflict on our western borders which we do not need.”

‘Driving a wedge between Russia and China won’t work’

Russia will continue to forge a closer relationship with “our good neighbours and friends” in China, the president said, calling the bond between Moscow and Beijing “a model for effective international cooperation in the 21st century.”

Last month, Moscow suspended all direct bilateral ties with NATO after the bloc said it was expelling eight Russian diplomats over alleged “espionage.” In his speech, Putin reminded everyone that things weren’t always that way.

‘Russia open for dialogue with US’

The widely-anticipated summit between Putin and US President Joe Biden that was held in June didn’t bring about a breakthrough in Russian-American ties. Moscow has continued to call for dialogue on multiple outstanding issues, including a potential arms race in space.

The ongoing migrant crisis on the Belarusian-Polish border has prompted a storm of high-profile accusations coming from the West, and has been described as part of Minsk’s “hybrid warfare” against the EU. Putin, however, pointed to the humanitarian part of the crisis, with hundreds of  people stranded in the woods in frosty weather, arguing that this side of the stand-off tends to be forgotten.

‘Russia to step up involvement in global issues’

Targeted by multiple sanctions by the US and its allies, Russia has been described by western officials and media as being increasingly “in isolation.” However, that is not how Putin apparently sees Russia’s role in solving international challenges.